I never thought I'd come to it - but I'm going to post a picture of one of my dogs! 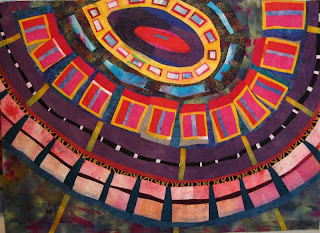 I was surfing around – as you do! And came across Cathy Kleeman’s blog about Reclamation. She wrote “Do you have old works that you no longer want on display? Or something more recent that just didn't work very well and is never going to get out of the closet? What do you do with them?”
And it reminded me of a class idea I’d suggested to a quilt group last year – I called it

I thought it was a great workshop possibility!!

I described it thus: “Bring your “dogs” in for a makeover!! Many quilts just don’t seem to have the strength and pzazzz that you pictured when you first had the idea. In this “clinic” we take a look at what is not working – and why – suggestions are given for strengthening the composition, clarifying the color scheme, constructing the unconstructable or deconstructing the over-constructed!

Learn how to finish the unfinished….or how to learn from them – and then leave them!

This workshop aims to give you ways to solve problems in design and composition, in colour and in construction.

Bring an open mind and lots of problems – the more the merrier!”

Now, that particular guild must, I think, have been made of very superior ("superi-ahhhhhh") quilters because they just sort of shuddered and rejected my idea!! But I had based the workshop plans on a workshop I’d done for another guild – about 30 folk each presented a piece and we talked about how to evaluate it, how to strengthen it, reduce the weak spots etc (as above). Many of the people later followed the suggestions that were made and emailed me pictures of very nice work that resulted. I actually saw one of them get a prize in an art show! And there was only one piece where I was utterly gobsmacked (as in totally speechless at the horror of it!!) – and, very fortunately, when given the opportunity to speak about the piece, its maker was able to totally justify it to herself and needed no further input from me – thank goodness!

Maybe one day I’ll get to help folk make over their dogs!! Or, at least, commit them to their Happier Hunting Grounds!!

Posted by Elizabeth Barton at 9:09 AM

In the Sep 2008 issue of American Quilter (from AQS - Paducah) there is an article showing the results of an editors' UFO Challenge (P 52-55) That is somewhat similar to your Doggie W/S idea. I don't think they are all successful, but the quilt makers are happy with them.

What a great idea and what fun.
How about asking folks to bring their dogs in a wrapped unmarked in a brown bag and for openers, do the critique anonymously.