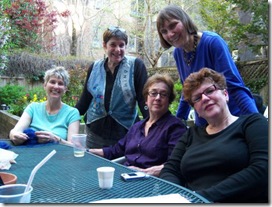 One of the wonderful things about the trip was the ability to discuss fiber and fiber art constantly with good friends – and the occasional glass of wine!   Here we are in the hotel garden  (from left to right: me, Robin Schwalb, Linda Levin, Dominie Nash and Jeanne Butler , picture take by Karen Perrine).   We spent some time discussing 4 shows quite fascinating to a textile artist.

I love black and white work and in the two yearshave made more than a dozen pieces that are mainly black and white.  I want to get even looser and bolder! 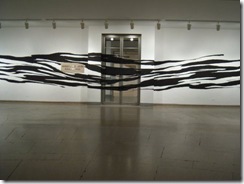 So I was thrilled to see Sun Kwak’s installation at the Brooklyn Museum;  she took black masking tape and installed these strokes and waves around the entire gallery, over the doors, around the pillars, over the cupboards – everything!!  Actually it would have been neat if the guards also had black/white striped uniforms!!

I love the flow of it…you can see her working on the piece on the video below: 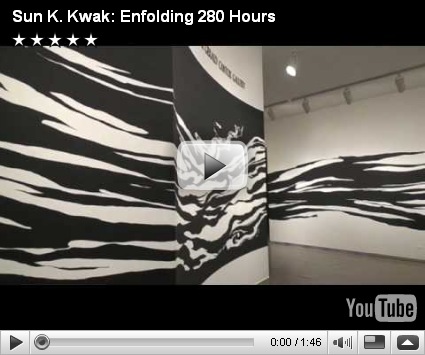 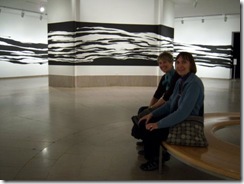 Above, Dominie and I gazing in wonder and thinking about the possibilities! anyone got a roll of black masking tape?

Another “hot” artist is Tara Donovan and she too is working in black and white!  Actually my very very first quilt of all was black and white, I won’t show it here next to these wonderful pieces though.   Tara Donovan is known best for her installations of thousands of identical everyday objects: paper cups, straws, and buttons (we saw amazing coruscating crustaceans of buttons glued together by her very sure hand  at MAD).  However, at Pace Wildenstein gallery is an installation of her new “drawing” work.

These are monographs, black ink on white paper.  They are created by shattering the glass after it has been inked and before rolling through the press – only one pass can be made of course.  So each is unique, different patterns come from different types of glass.  Tara Donovan also had some fine delicate pieces made by laying threads on the paper before putting them through the press with black ink. 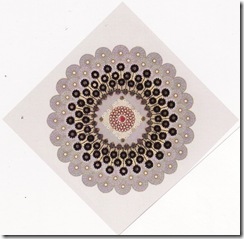 At Pavel Zoubok gallery, we were fascinated by the finely detailed, meticulously and obsessively stitched mandalas of rose petals, buttons, beads, coins, seeds etc made by Donna Sharrett.  She described these pieces as being about memory – each of the items having been donated and containing the memories of the person who gave it to her.  The ends of guitar strings contained the reverberations of the music played.  The show is thus titled Reverb.

At Pace Wildenstein’s Chelsea gallery we were surprised to see these works.  Canvas, dip dyed in Rit, and hung and joined by means of large grommets.  This  is
Richard Tuttle’s new work.     The pieces are about 2ft high and 10 ft wide.   I really did not see the magic that I loved in his earlier work with a few wires and shadows.  The cloths looked rather lumpy and while the show was entitled “Walking on Air” I felt it never took off at all!    But..I think an art quilter might just be able to build on the idea!

And, if you have been, thanks for reading!   Elizabeth

Posted by Elizabeth Barton at 8:26 AM

Sun Kwak's masking tape installation is incredible! I was fascinated by her method. Really a work of art.

What a wonderful adventure you had in New York. Thank you for sharing all the good stuff. Karen Perrine held a dyeing workshop at my house a few years back. She knows so much and is so talented!

Wow thanks for showing us Sue Kwak's work - it's wonderful.