Recently I've been asked several times about construction - it seems like an awful lot of people are fusing these days and people want to know what I use.  Well, I've never really tried fusing...I haven't needed to...I don't know whether it's the type of quilts I make or my fondness for the stitch or my fear of glue!

I do always work from a sketch, not being fond of racing back and forth to the design wall like a retriever, but my sketch can be pretty rough.  However, it does mean I have a very good idea of which pieces are going  to go where, and the order in which they can be sewn together.
I usually have two copies of the sketch - one with the values  (light, medium and dark).  The value sketch is on the design wall next to where I'm blocking out the quilt.  Then I have a gridded line drawing that shows the shapes and proportions - it's on the cutting table.  The grid helps me to calculate the size of each piece of  fabric I cut out. I look at the sketch, calculate the size, add seam allowance, cut out...stroll to the wall and pin it up!

So you can see - for the quilt at the top of the page...once I'd pinned everything up and made sure all the proportions and values were correct, and it looked the way I wanted it to...once that was done, all I had to do was piece those strips together...then piece the strips...

My fabric is sorted by value.  and I never pull from my whole stash...once I've decided on a color scheme, I pull out all the fabrics I think I'll use and put the rest away.  Too many choices can....well...you know what!! And, I'm not keen on quilts with a rainbow jumble of colors.

I  think it's important that you should make work that you personally like!!!  Even if your friends and family think it's totally weird.  Yes, I've been greeted with many a puzzled look and a "well, what's it supposed to be?"!!!  You just have to plough on through that one!  The quilt above (currently in the SAQA show Concrete and Grasslands) was shown to 4 friends, two loved it, two hated it - so I guess - on average - it was deemed acceptable!  Statistically kidding apart, people definitely thought it was weird...until the perfect show came along ...and then they got it.

For the quilt above I pieced the two big background fabrics... the sky (background) and the rape field  (foreground)...then I appliqued the cooling towers onto the horizon and then layered various scraps of silk over the top to make them look beautiful...and no! they are not elephant legs upside down!!

And yes, the bottom fabric is all shibori - arashi shibori - here's a detail: 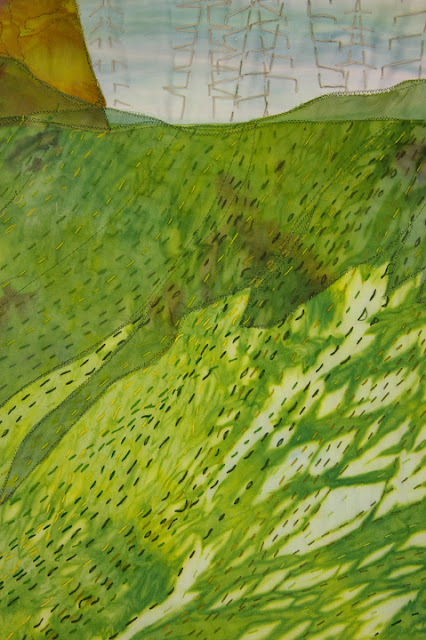 You can see I like hand stitching!!
well, time for a nice cuppa tea, I think...
If you have been, thanks for reading...and not thinking about elephants!   Elizabeth

Posted by Elizabeth Barton at 6:05 AM 6 comments: 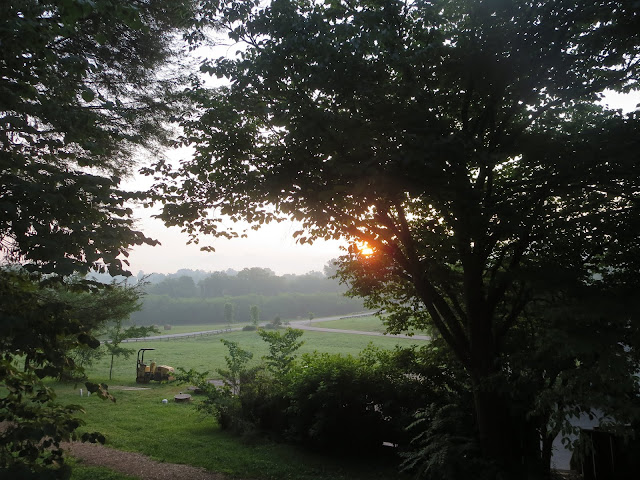 Just got back from a great week at John C Campbell Folk School which is in a most beautiful part of Western North Carolina - they have a whole gorgeous wide valley to themselves, and I love to see the green space with the mountains beyond....the old, old, Smoky Mountains - some of the oldest mountains in the world, so very softly rounded and cloaked in trees....greeny blue waves going off into the distance..a great example of aerial perspective! 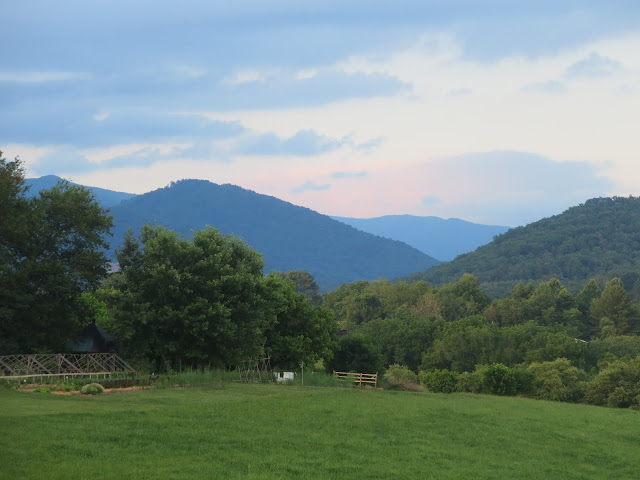 I was taking a painting class, and of course all the art principles are just the  same no matter what the medium...so it's always helpful to practice them over and over...trying to get that "knowledge beneath the surface" or "muscle memory" .......

Working with abstract design (which is really the best way to think of any design - shapes and values!!!  not mountains and valleys...) is a really great way to get to be a better artist.
And this week my Abstract Art for Quiltmakers class starts at www.academyofquilting.com
When I started researching abstract art to get some ideas for some abstract quilts, I was really struck by how nearly all the "Big Names" - the most well known abstract painters - are men.  Arn't there any good women abstract painters?  Well, of course there are - tons!  And so I decided to build this class totally around women abstract painters....in each lesson I describe the work of 2 or 3 of them, and then show you just how they created their abstract paintings.  I devised detailed steps for several exercises each week which will yield a bunch of new designs...by the end of  the class, your design wall would be covered with designs!  Of course you can stop designing and start making...at any point you wish.  I'm in class pretty much all the time in order to help you.
Here's a quote from an evaluation from a previous class - and I've no idea who sent this in - but I was thrilled to get it!

"Imagine buying an E-book with both practical and inspirational design ideas and then discovering that it has magically added another room to your house, somewhere between your computer and your sewing room. Not only are the comprehensive instructional materials right there, you can go into that room at any time, day or night, and find your own equipment and stash waiting for you. Nearby are large tables where other students are working. You can look at each other’s work, hear everyone’s questions to the teacher, see the results of their research, and join in any conversation.
Elizabeth’s comments are helpful and encouraging and several times a day she is in this cyber-room, offering suggestions for improvement or links to relevant sites on the internet --- always being focussed on the specific interests and needs of each student. I have taken many classes in the “real” world and online, and I have never received so much personal attention.
Working at home, we have access to all our own fabric and equipment. We haven’t had to choose what to take to with us, drag along our sewing machines, pay for a plane ticket, or wait in long security lines.
The instructional materials are excellent, meticulously planned and illustrated. Because of the feedback from the teacher and the class, I actually have done the exercises suggested --- not the case when I read a book on my own."


Happy to answer any questions...and LOVE to have comments!!! please ...feel free...
anyone fancy a nice cuppa tea?  I'm putting the kettle on!

If you have been, thanks for reading!  Elizabeth

Posted by Elizabeth Barton at 6:38 AM No comments:

Problem solving for the artist.... 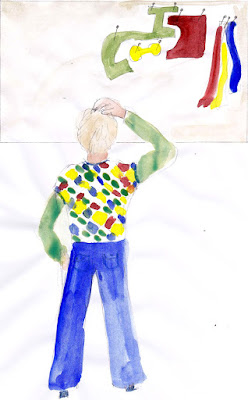 The fiber artist at work:  There's a flurry of cutting and pinning up on the design board...there's sewing and unpicking and cursing, and jubilation and despair and discarded shards of fabric all over the studio floor.........
and then you come back the next day and look at the wall and the awful truth is revealed:

We've all been there..so what is the next step?
Alas, sewing it all together while saying "the quilting will help"....or "I might add some beads"...or lace...or, in dire circumstances, both(!!) does not work.

Does not work, even though sometimes the quilt with the most junk affixed to it wins the show!!!  A tour de force of fixology!
By the way: Just because a quilt gets into a quilt  show doesn't mean it's actually any good!  Quilts get into shows for a variety of reasons...yes, reason #1 is because it's a very good and striking design and beautifully made.  But also they get in because many shows are judged by photographs....and so what got in was actually the photograph, rather than the quilt.  Sometimes the jurors are told: you've picked the best...and they'll fill up half the gallery, now pick the next best, and the next and the next.
Also, jurors are human!!  (yes, it's true!) Some really hate a certain color, really love another color.  They all have prejudices and biases - no matter what they say.  Psychological experiments have shown for years that even if we truly believe we're not acting on our prejudices...we are.   The teacher unknowingly spends a little more time explaining something to the  pretty child, than to the ugly one.

So don't add "stuff" just because the prize winner at the local show had added stuff.....

It's very hard to solve  a problem when you don't know what it is!  That's why it's good to get an actual diagnosis when you go to the doctor's!!  (of course sometimes you don't get a diagnosis, but rather  the equivalent of extra quilting, or beads or lace !!  but that's another issue).

What is  the actual problem?  Why is this quilt "not working"? And, by the way, what does "not working" actually mean?  I must admit I really dislike this phrase...and the slightly upmarket version of it "it's not well resolved"  !!  Both are very vague and not in the  least bit helpful.

The function of most art work is
1. to attract your attention and
2. keep it.

To fix problem 1:
If it's boring, almost certainly you don't have enough contrast: contrast of any one or more of the elements that go to make up a design:  line, shape, value, color, texture.  It's helpful to work through these one at a time (and the most likely culprit, by the way, is value) to find the what's missing.
Contrast creates tension - tension keeps our interest.

To fix problem 2:
If it attracted your attention but then you really didn't want to keep looking at it, it's probably because it has no unity, no harmony, it's a chaotic mishmash of stuff with no clear message.
You don't have a basic structure, you don't have a focus, you have too many different elements.

Think of these 2 problems in musical terms:
problem 1 would be suggested by a piece of music that was one repeated note: the same note at the same speed and the same volume and the same degree of resonance.
problem 2 is the piece of music that's just a cacophony of sound - the piano piece composed by a computer that included every one of the 88 notes on a piano keyboard, in random order, each just once!

So...what d'you think?  What d'you feel is the function of art work?  The most likely problems, and the clear solutions to those problems???  Do they fit into the format I suggest...or are there other difficulties?  do let me know!!  After all, I'm going to have a nice cuppa tea......
And, if you have been, thanks for reading!    Elizabeth

Posted by Elizabeth Barton at 6:49 AM 5 comments: