I posted this some years ago...but recently in some of my classes it's evident that designing begins with the first four lines - i.e. the edges of the piece...and  those should be considered as carefully as all the rest.......

I've often wondered how important the so called golden ratio really is in art.
It's one of those things that "experts" love  to talk about ...but anyone who labels anything in art as a "rule" has me thinking "why?"....actually I must admit I wonder why? about a lot of rules...BUT that is another issue!
As art quilt makers it's important that we know which guidelines are really useful in designing...and which are more the result of one person repeating what another said, and another repeating  that.  Like the old story of the famous grandmother's recipe for roast turkey which involved cutting a 2" slice off each end of the beast.  The family swore for years this was the secret to her perfect roasts, finally somebody asked the old lady the reason for this rule..."oh", she said, "it was to fit in the oven, I only had a small oven!".   And cooking isn't the only place where strange superstitions and practices have built up over the years...maybe we're all turning round and round before we peck at the feeder like Skinner's chickens!!!  And I want to know "why?"

But first....what is this Ratio anyway?

There's only one number ratio that will do that and it's approximately 1.618033989...It is exactly equal to (1+√5)/2 - if you're the mathematical kind...which I'm not...alas!
but mathematicians really love these special numbers!!!  And in mathematics the 1.618 number turns up everywhere e.g. in a pentagon - hence the "magic" of the five pointed star...but I digress.

There are many books and articles written about the importance of  this ratio in art, in architecture, in painting, in photography (photographers cling onto their Rule of Thirds almost as tightly as to their cameras), in poetry, in music and in nature.  The Greeks revered it.  Kepler said that in geometry there are 2 treasures: pythagorus and the Golden Ratio.

So last week I went to a couple of lectures by the Famous Calculus Professor (FCP), now retired and keeping his mind active by examining any claims as to the magic of numbers!!

Take a look and see which one you think is the most attractive: 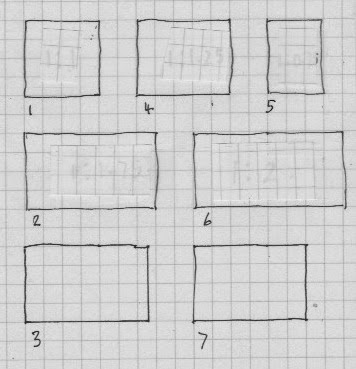 Opinion was somewhat divided but people did tend to prefer certain ones.  Scroll down to the very end to see which one is the so called "golden" one.....

So is there something to this?  Have artists, architects, musicians etc across the ages used these particular proportions to increase the beauty of their art form???


When the the GR experts show a picture of the Parthenon with the GR lines drawn around it.  You can see, if you look carefully, that the position of those lines is largely arbitrary - done simply to create that ratio – do you include the steps or not??!!!  It’s very random.

There is some evidence that Le Corbusier actually did use the number. But images of Mona Lisa with lines drawn on it are quite arbitrary too – often they don’t include the whole face!  You could actually take any portrait and just randomly draw lines on it and sooner or later you'll come up with the right ratio.

People have spent a lifetime analyzing the number of words in verses e.e.g Virgil’s Aeniad….showing  that they agree to the GR.  But you can count up the words or  the syllables in so many ways you can create something that approximates the GR if you pick your object carefully.

They thought people like Mozart used the GR and counted up the notes, or the phrases etc etc…but a careful analysis shows the same problems with music as with poetry. Imagine counting all those notes?  and what about chords? d'you count them as 2, or 3  or 4??

Despite numerous claims that artists, writers etc did use this particular ratio, (one prestigious Latin professor even built his whole amazing career on revealing this in various writings) - despite analyses of the art of Da Vinci and Micheangelo and Virgil and Dante and Mozart etc   most of them DID NOT use this ratio.  They simply used whatever felt right for their particular art form.

So is the whole thing about the Golden ratio a load of old cobblers then?  well....having thoroughly debunked its use in art, the FCP  turned to nature and the Fibonacci series.

Now,  consecutive Fibonacci numbers have a particular ratio to each other....and guess what?  yes!  it's 1.618...very approximate in the smaller number but by the  time you get upto 233/144 it's spot on.

Then we looked at flower petals, and the spiral lattice you see on the bottom of pine cones and pineapples.  Counting them up we realized that there were 13 clockwise spirals and 8 anti clockwise spirals.  13/8 = 1.625  - pretty close to THE ratio!!
But why? why does nature "choose" to use the Golden Ratio, the magic number beloved of mathematicians where artists (of whatever medium) actually haven't?  The answer is efficiency.  The best way to get the MOST little seeds into a sunflower head, or pine cone, is to create the lattice effect of two sets of spirals that are related in that particular ratio.   And if you're going to survive, you want as many of your little babies out there as possible.

So...the ratio is Golden for survival, but...really not at all crucial for art!  So don't worry if your ratios are a little off, your thirds not quite corresponding to the norm, Da Vinci didn't, the architects of the Parthenon didn't, Mozart didn't....just smile gently at the critic or the teacher who insists  on concrete, permanent, eternal rules without question!!!

However......also remember that one of those ratios in the image above was considered "more pleasing" than others.....and having a more pleasing outline would give your art work a head start....

....and now for a nice cup of tea after all that hefty cogitation....if you have been, thanks for reading!
Elizabeth

and the answer is:  number three.


Posted by Elizabeth Barton at 4:21 AM 5 comments: