This coming Saturday, Oct 22, 2016 will be the annual art fair at Lyndon House Art Center in downtown Athens.
it's going to be a fabulous day with over 80 individual artists, lots of live music and, yes, food!
The best of Athens come out for this occasion....and the artwork will be very varied in price and type so as to suit everyone.

I have a bunch of new paintings and some new quilts, also some older work that will be for sale for ridiculous prices!   Something for every wall, and every pocket..  Please come and see!
The fun starts at 10 am and if I know anything about events at Lyndon House, the parking will go pretty quickly....of course there will be considerable turnaround during the day...but the early birds get both worms and parking!   Lyndon House has also arranged with all the nearby businesses and organizations for extra parking, of course.

Here are some of my new paintings  and a couple of new quilts: 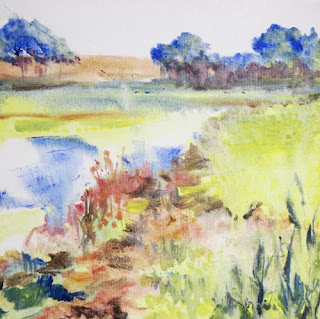 This is a 12" square acrylic...we have a pond in our neighborhood and I love to look at it in many different lights on my daily walk.
$100.  I hope to have 3 more little acrylic landscapes by Saturday...they'll make a nice set!

Watercolors range from $25 to $150...depending on size, age and whether framed or not. 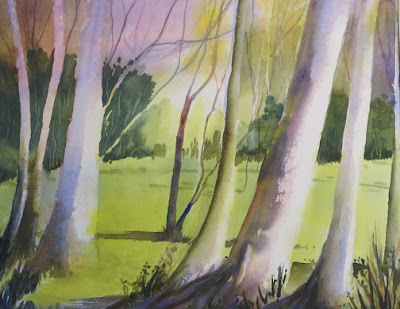 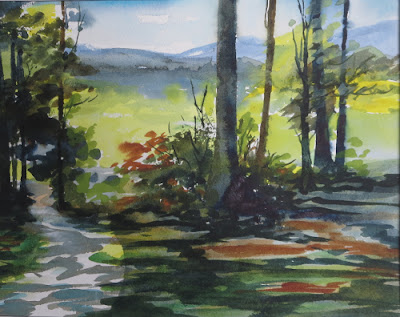 This painting on the right and the one above are two of several I've done of the UGA golf course...I took some Canadian friends round there earlier this year - had never been before!  And the grounds are lovely...got lots more photographs to work from... 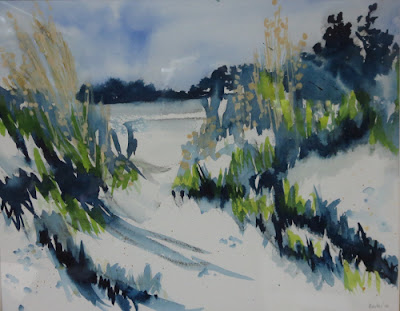 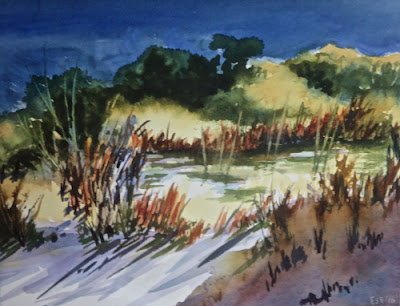 Our summer trip to the south Carolina coast had me inspired by the dunes...love the shadows you get in the early morning and late in the day.....

below, more dunes, palm trees in the wind and a storm brewing - quite prescient as it turned out! 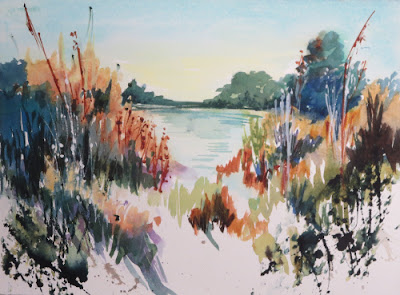 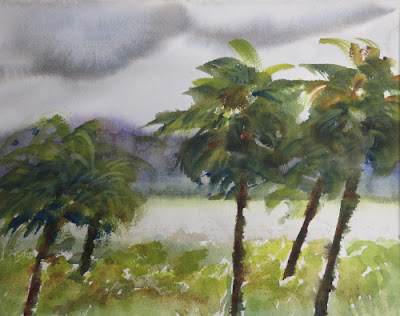 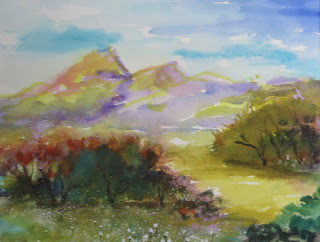 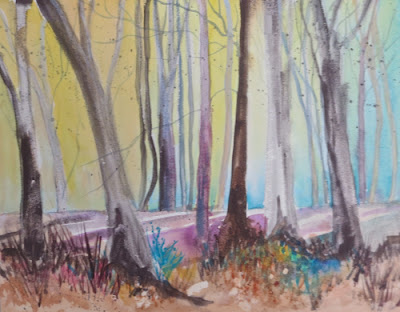 Imagining some of the golf course trees in the winter...there are lovely little copses of trees standing on slight rises.....
also did a painting of the pond at the golf course....which I don't have a picture of ....yet! 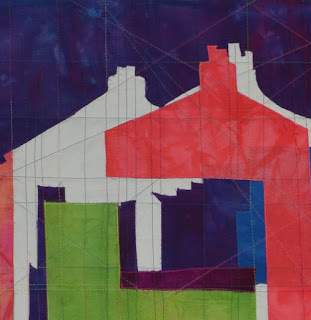 And here's a medium size one...yes it IS a quilt - or fiber collage as some prefer to call these "art quilts" that hang on the wall. 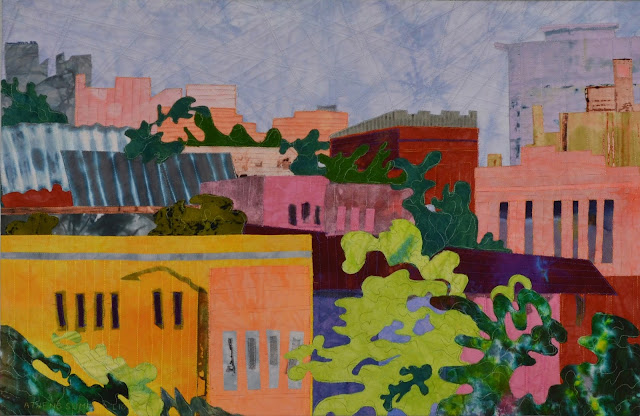 Thank you for working your way down and looking at all the pictures!!!  I hope to see you at the art show.....if you can't come, and are interested in any of these pieces, please just write to me - my email link is on the side bar near the top.
Also, all comments are received with great delight!!!
If you have been, thanks for looking!!  Elizabeth

Posted by Elizabeth Barton at 11:08 AM 3 comments:

The Proliferation of Online Classes

I'm swimming my way through the proliferation of classes online and I'm wondering what other people's experiences are like.   As you know, I've been teaching (mainly different aspects of design, but also some surface design) online for a number of years now..maybe seven years....and I also have a private online master class.  Meanwhile, I've been taking online classes myself - not in quilting - but in several other things.   So I've been thinking about some of the pros and cons of the online experience.

Feedback
From the teaching point of view I really like having personal contact with the students...which I do in all my classes...just writing lessons and then putting them out there with no discussion and no feedback seems very sterile to me. And with the lessons I've taken in other subjects, they are nearly always computer driven, and since I always have questions - I find that very frustrating! Especially when the computer makes a mistake!  Online lessons that don't have teaching feedback are no better than reading a book - and a well illustrated book is often easier to use - you can flip back and forth ...slow here...fast there etc.
Research shows  that two things are key to learning: practice and feedback.  The non-teacher present learning situations are therefore going to limit one's progress.

Timing
Start date: Some classes run for a specific period of time, others you can start whenever you want.  I like the flexibility of starting whenever you want, though that might make problems for
student/teacher accessibility or for discussions between students all moving forward as a cohort through a sequence of lessons.
Inter-lesson intervals: I also would like to be able to move forward to the next lesson at my own pace - sometimes more quickly than they plan, sometimes more slowly.  Some programs allow this, others don't.   I was very put off recently by a language learning site that required you to sign up for 3 months, but the amount of material that was offered I knew I would get through in just one month! Three month sign up for one month access to material didn't work for me.

Continued Access
Sometimes you get to the end of the course and you'd like to take a break and then review the material again....I was very miffed when  a site that promised I could do that at the end of the course completely reneged on that promise!  However, I can see that unlimited forever access could be problematic for the teaching agency....what I've done with the master classes of previous years is allow access for at least a full season after the class has finished.

Pricing
There does seem to be a usual rate of about $10-$20 per lesson where there is a "real" teacher available for feed back....and that seems very fair to me...but where the whole program is computer driven I feel that this would be too high.  A recent series of bridge lessons I surveyed wanted $15 per videoed lesson - no feedback available.  On the other hand,  most painting DVDs are in the $20-$30 range...BUT you have them for ever and you can freeze one frame and work from it in the studio.
Piano lessons with one teacher via Skype are quite high: about $75 per lesson.  And, remember, ANYONE can say they're a piano teacher, there is no professional license required!

Videos - too fast or too slow!
Surprisingly, although everyone says all students want videos, I have not usually found them to be very helpful.  If it's something I need to actually see I've found that on the video the action or position can go by too quickly, a clear series of photos or even diagrams would be more helpful.  And, quite frequently, the opposite is true, the person demonstrating on the video faffs around and I get bored waiting for the crucial bit of information!  When will she actually tell me the right key strokes?!!!!

Variety
While there are a huge number of lessons out there, often none of them are exactly what you're looking for!  it would be good if one could contact the agency and say "how about making a class on this, or that, topic? "  However, when I have contacted the companies I've usually found that you can only email a salesperson rather than the creator of the lessons.   (But feel free to contact me if you have a yearning for something that you think I could write a course about!).

So...what are your experiences?  how would you like to see online classes presented?  What are you looking for in your classes?  Comment please!  or feel free to email me privately - there's a link up on the side bar on the right....I love to hear from you!

And, if you have been, thanks for reading...it's time for a nice cuppa tea, don't you think?
Elizabeth

Posted by Elizabeth Barton at 6:41 AM 18 comments:

You know how people come up to you at an art show and say "oh you're so lucky, you're so creative"? ( Luck? !!!).   As in: you were lucky you were born with good eyesight, where I have strabismus...
Then they tell you that they're not creative, sometimes sadly but sometimes almost proudly! How could one expect them to be creative when they weren't born with it?

And the truth is, they're right...they're not creative.  Why not?  because they're not creating anything - they're not trying to come up with new ideas, original images, make art, or landscapes or even great puddings.  But...do they have the potential to be creative?  Probably they do....though the amount of potential one has can, of course, vary.

These days cognitive psychologists have discovered  that measuring  "creativity"  only by output i.e. what one has created is not necessarily a very good way to research this slippery concept.  A much better clearer way is to think about one's potential for being able to create, how to define and use that.   The scientists should be measuring potential and not performance.

I went to a very interesting talk last week given by Dr Mark Runco one of the world's leading researchers in this field...sought after by a lot of big companies (yes the advertising agencies Of course and all those companies wanting to sell you things, but also agencies like the CIA - the dark side of creativity!).

He said there were a number of key findings about creativity. For example, some of the recent findings suggest that the potential for creativity is not located in one particular area - all this right brain/left brain stuff is incredibly over simplistic.  When they put jazz musicians and a key board through an MRI machine they found that when they were asked to creatively improvise upon a simple melody, the whole brain lit up, and particularly the prefrontal cortex.  When you are being creative you are not using one particular part of the brain but rather networks across  the whole brain.  Which makes a whole lot more sense.

Intuition does work...but only if you have the "knowledge beneath the surface".  People simply don't know all that they know!!  So a famous artist can tell you that they're working totally intuitively as if  that requires no former knowledge but rather just the desire and courage to work with the particular medium at random because that's how it feels to them.  They could be completely unaware that they are basing their decisions upon a lot of knowledge and experience. There have been lots of experiments demonstrating this.

One of the most interesting things he  said was  that problem finding was more important than problem solving.  If you know what the problem is, you can solve it....but without that knowledge you just flounder around.  This is why it's important to be able to look critically at what you're doing and see just where things are going wrong.  Whether you're selling shoes, or creating an art quilt.