Build your own Master Class! 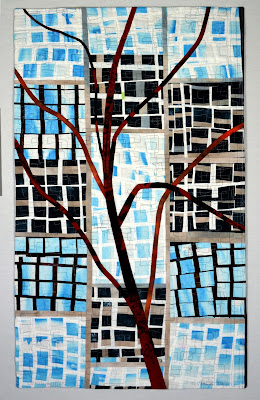 It's upcoming to winter here in the S.E. of the USA....that is if we have a winter at all!  Last year we had about 6 weeks...and so far I still have impatience blooming in the garden - left over from last summer.....

I'll be starting my 2018 Masterclass on January 1st.
It's a yearlong commitment to improving your quilt designs (or other fiber media for that matter, I have had weavers, stitchers and embroiderers in the class).

Each month I issue a new assignment which addresses a key design concept such as the importance of good value patterns, how to achieve the illusion of depth or motion, how to work from a photograph, how to develop good color schemes and so on.  Each assignment can be interpreted by representational or abstract work and if you veer off the assignment a little, I won't mind! (Recently I took an online course where pretty much the only feedback I got was "you didn't follow the instructions"! - very hard for an iconoclast to do that!).

My principal interest is helping you make stronger work, and in avoiding the many pitfalls there are in designing and creating art.   I'm fortunate in that I have many art friends here and we can help each other with critiques but many don't have that.   Research in improving one's performance rests on two things: the amount of time you give to it PLUS informed help along the way.   It's not just the 10,000 hours....it's the hours plus the personal help.
I think it's important to give critiques that focus on the strengths, but also address any weaknesses and suggest solutions.  I've always enjoyed problem solving and this is a great way to help others.  I used  to do a lot of traveling and teaching, but (as I'm sure you know) travel is just not much fun anymore...plus I was frustrated by not being able to follow through with the students for a significant period of time to help them move forward.  Having decided to get piano lessons after having failed to teach myself (for some time! ), I realize the huge importance of the regular contact with the teacher and mentor over a period of time. 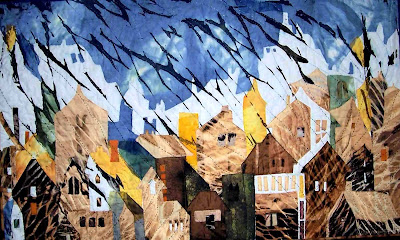 I offer a year long Master Class with a blog and 10 assignments. I critique these at three stages: design sketches (need not be fancy!), blocking out, and finished work.
If you're at all interested please email me at elizabethmasterclass@gmail.com and I'll send you full details, feel free to ask any questions.

Also, since I have more time now as I'm not travelling very much, I would like to offer a "Build Your Own MasterClass" - write and tell me what you personally would like: suggested assignments, or self-chosen ones, frequency of assignments, amount of responses from me and I can see what I can arrange and what the cost would be. A "personalized" course! 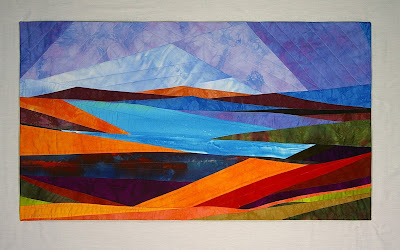 For the year long Master Class with the Master Class blog where you can view other students' work and my comments (this is as anonymous as you wish), please email me by mid December.
The strength of this class is twofold: the timetable helps to keep you on target!  And secondly, you can learn a great deal vicariously from seeing how I respond to other students' work.

For a Build Your Own Class - just email me any time!  Let me know what you are interested in....and I'll see what I can do.

Looking forward to hearing from you.
If you have been, thanks for reading!!   Elizabeth

NOTE: I've had several queries about more details for the Build Your Own class...
please go to the special blog    for more information!  Thank you.   Elizabeth

or write to me directly: elizabethmasterclass AT gmail    for details of my regular master class.


Posted by Elizabeth Barton at 12:55 PM No comments: 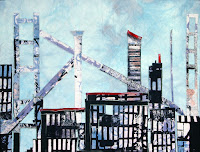 I was just reading about the artist's style in International Artist, in which Paul Balmer describes that for the artist finding one's individual style as "probably the most difficult task"....and his discovery of the answer. 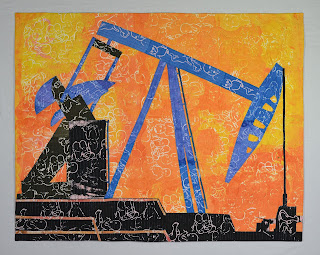 I must admit that discovering my own style or creating a style was something I never really thought about...I just made quilts the way I wanted to about what interested me at the time...but I did always work in a series.  and again that has always seemed to me to be the natural thing to do. 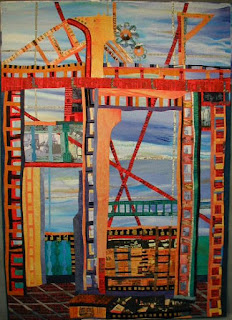 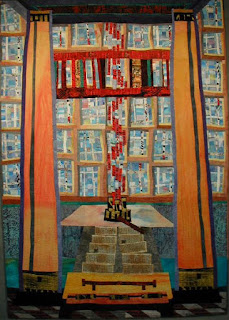 You make something and really like it...so you want to make another!!!  or something similar...and in  making that second one, you think of different ways you could have done it..so then you make a third...and the third begats the 4th, the 4th begats the 5th and so on... and so on!! 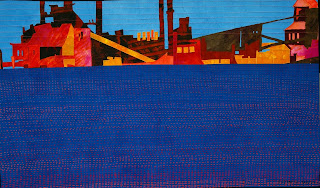 So I was curious to see what this painter's great breakthrough discovery might be.     And it's very interesting and something that I have seen in some of our famous quilt artists. 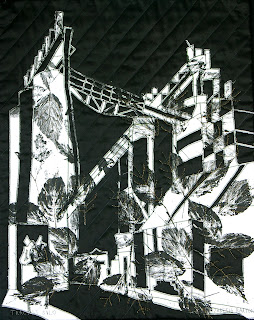 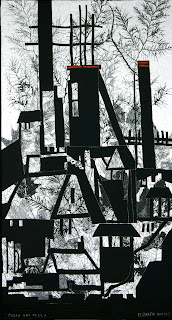 He had tried several things, like all of us, gone on courses, had favorites artists that inspired him...but then he goes onto say that the real breakthrough came  when he disregarded convention and tried something completely new - a new technique. 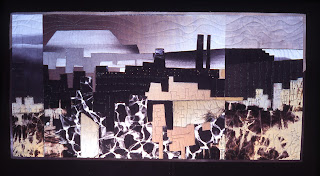 For him it was the application of power tools to the painting - drawing with a dremel and sanding layered painting to reveal layers beneath...neither of this would I think work well with a quilt!!! but nevertheless inspiring of cogitation! 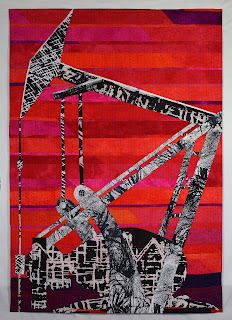 The central truth is: disregard convention and think up with a new way of approaching the task.  As we saw Nancy Crow do back in the late '80s and early '90 when  she took the idea of cutting out her fabric shapes freehand from what she had seen of  the quilts made by Anna Williams, the Gees Bend quilters and the Oakland quilters.. all African Americans working in ways they (or their ancestors) had learned through a combination of hardship and traditional African banner making techniques. 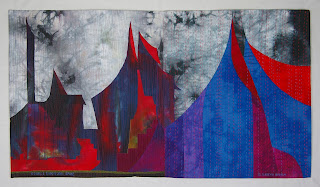 At that time leading quilters were Jinny Beyer and people like that who were all about precise and complicated geometrical piecing...perfect points, discreetly matched fabrics. 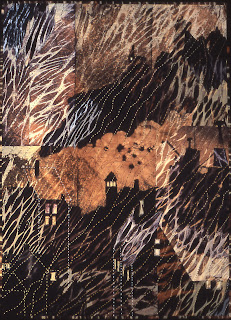 Jan Myers Newbury took the old traditional Japanese shibori techniques, gave them a modern loose and much more painterly approach and began her long series of beautiful quilts all based on arashi shibori. 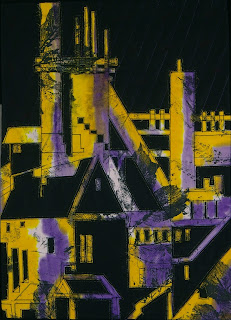 Linda Levin quit using dye and turned to paint...painting pieces of cloth that she then cut up and applied very roughly and to a base layer of batting  (usually flannel) and backing.  I remember her work being criticized early on by people who felt that all appliques should have neatly turned under edges, Linda didn't even pretend to cover the raw edges!!! 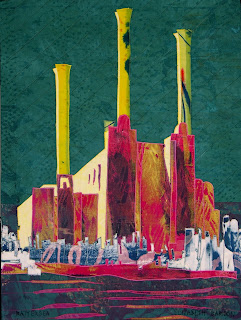 Paula Kovarik discovered that she loved machine quilting...literally drawing and writing with the machine needle to create complicated doodles or diaries...... 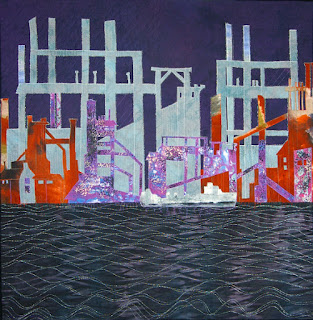 Suzie "Lucky" Shie decided to write her diary and impressions of her world ..out large on fabric rather than in a small conventional diary notebook.  She used air powered pens and brushes...which hadn't been used on quilts before. 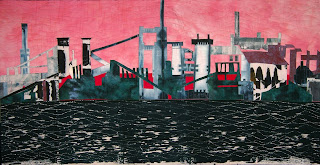 So all of these people made the leap into what became known as their particular style based on a technique, usually borrowed from outside the quilting world...... 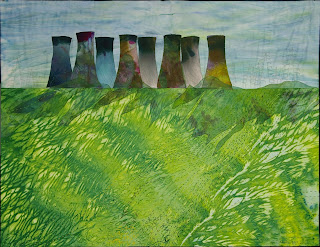 If you think about it, a lot of Painters did this too.  Jackson Pollock notieed paint drips  occurring on the floor as he painted...he liked the drips...they looked interesting, fresh and new...so he took the canvas off the wall, put it on the floor and dripped on it!!! 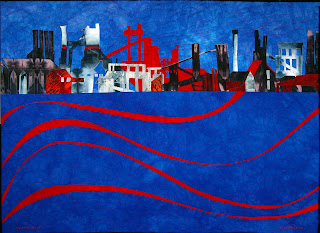 Helen Frankentaler decided to forgo the idea of pretreating her canvases with gesso, and instead worked on the floor staining them with thinned paint.

Emily Richardson thinned down acrylic painted and use it to paint  on recycled silks which she then hand sewed together. 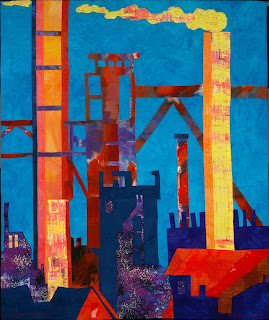 So...if you want to develop your own style and feel that you have not yet found your way... consider  looking outside the quilt world - to other art media, to the real world.  And when you have found a technique that you'd like to try, stick with it...the first few pieces will probably be more experimental samples than anything else...but keeping on going as all the above folk did will lead you..if not to the Holy Grail(!) at least to a recognisable style.  so finding a technique that you could apply in a new and different unconventional way is the answer...or one of the answers!! 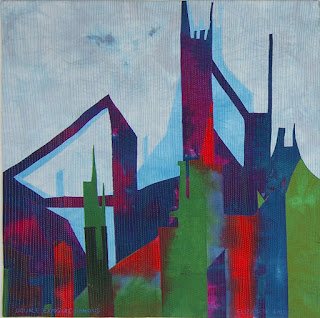 Another way to a style is to work from imagery that no one has used before...photographers are well known for this ...before Bernd and Hilla Becher  no one had shown interest in the Low Graphic  style they used or in the photographing of forgotten industrial buildings - factories, pit heads and the like. 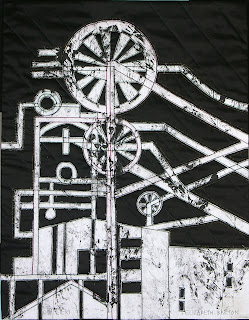 Well, if you have been...thanks for reading!! And do let me have your comments...your own particular path to style discovery.......