Creating Depth in two dimensions...and how to overcome cabin fever! 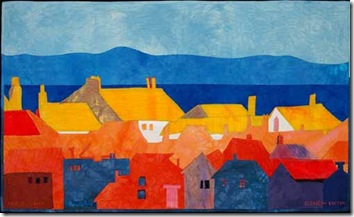 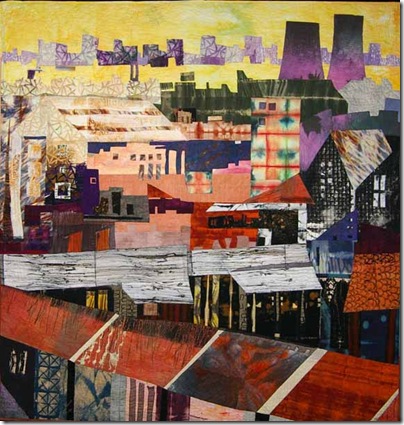 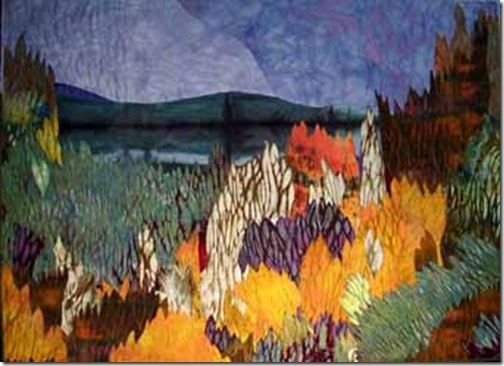 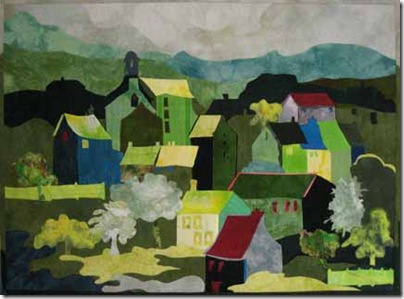 
Of course in real life and in designing life, you wouldn’t just choose or use one device alone to assess distance, usually there are combinations.  And, as you can see from above, you don’t always have to follow all the rules!!
If you want to experiment with designing with space – consider foreground, middle ground and background: 3 distinct levels of space. Starting with the furthest point in the landscape and building forwards..developing more contrast etc.
and if you're getting cabin fever - already!!! and we've only got 5 months to go...consider an online class.
the academy of quilting has some really good ones, and there are about ten different ones you can take with me personally.... I'm really interested in design and getting a strong composition from the start, and very happy to critique/evaluate your sketches or work as you take the class.  Think about it!
Happy to answer any questions in the Comments area...or email me directly:
elizabethyork100 AT yahoo.com

Elizabeth
Posted by Elizabeth Barton at 2:41 PM No comments:

Have you looked in the mirror recently and seen your mother? 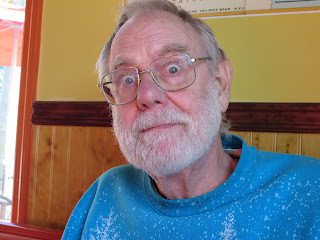 
Learning!
It gives you immense zest for life when you can feel learning taking place.
And you'll soon forget about the person in the mirror!

There's actually some science to back this up!!
well sort of....it's a bit of a goofy site, but the little video is hilarious and laughing creates endorphins too!
I love learning and it always makes me feel good.  and....learning leads to happiness, and the happier you are, the better you learn.  It's all to do with the endorphins of course.

but...what to learn??
Well you could learn something new...take a look at what your local community centers have to offer, and art centers etc...there's nearly always a lot going on.  Don't be afraid that you won't be any good!
Of course you'll be no good!!! you've never done it before!  Also please don't think you need something magical called "talent"!!  yes, to get really really good at something very difficult - whether in music or science or athletics - you need the right kind of body and mind, the right kind of upbringing and excellent coaching and masses of persistence....BUT

....to enjoy learning, to learn something new in just about anything is a real boost.  And teachers are very happy to help and they don't expect you to know it and be an immediate success!
Well, having said that I have run into one or two people who gave up on me after ten minutes because I was not immediately brilliant at what they were trying to teach me...but that does tell us more about them than about me.

What makes a good learner?  Willingness, enthusiasm, alertness, an open mind, and a sense of humour!!

Now if you live in Athens, GA...or thereabouts, come and learn watercolor with me at the Winterville Community Center......or you could learn aikido there too!  or Zumba!! or oil painting.  you can learn to swim at the YWCO   or a whole multitude of things at Lyndon House or OCAF or many different kinds of dancing downtown!

okay I know it's very unlikely that you live here! But I'm sure your community has all kinds of things to offer.
and you can also take classes on line...I teach here and have new classes starting all the time - last week was The Great Scrap Quilt!  And this week it's abstract art for quilt makers...
Join me in learning!

and, if you have been, thanks for reading.
Do write and comment on what you have been learning recently and the effect it had upon you.