I've been off the radar for a couple of weeks teaching and sight seeing......in the Pacific North West..
many things...wonderful things!!  Maybe there will be watercolors and quilts as a result, but certainly a lot of great memories.

We visited the Olympic National Park.  Unlike much of  the coastline of the USA, the Olympic peninsula coastline is a national park protected by our forefathers long ago so that we all could enjoy it.  It was wonderful to see open beaches and natural vegetation, no endless hotels and condos (my mother used to call them condoms, perhaps she was right...), no hoardings, no fast foods and exhortations to consume +++ 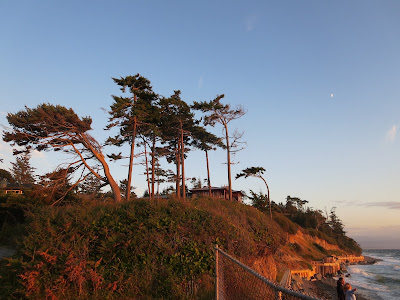 and  the Butchart gardens on Vancouver Island...which were steaming with people but enough flowers for all! 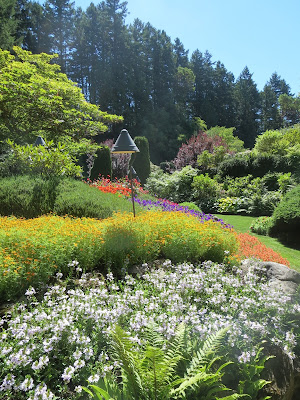 And I think both of these images could be simplified into pleasing compositions with good structure and focal points without too much manipulation.

The view from one wonderful home was awe-inspiring: 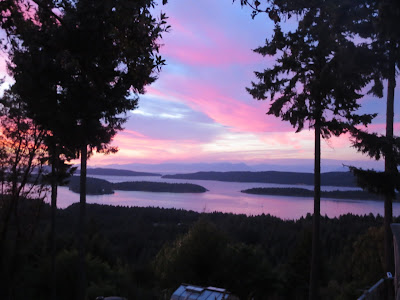 On pictures like this you really can't beat nature...best just to look and look and look....and not try to interpret..I think.  Especially with your feet up and a glass of wine!

And the workshop went so beautifully - everyone working away hard and all producing very personal and very different work - see below...
first the studies on paper...which meant that many went home with lots of ideas for future work...and then beginning on a fabric piece...
My goal is always to open up possibilities..different designs that you can achieve from one photograph, encouragement to try different value patterns, to consider mood and personal interpretation..and simplicity.  So I show lots of O'Keefe and Dove and Avery and Katz in order to inspire.
For the first time I had interpreted most of my lecture notes into Power Point presentations which made the design points so clearly and were much better to look at than my physog trying to explain design niceties!

There was lots more work, I just didn't have good photos of everyone....
and now for a nice cuppa tea while I think about my own work!

There's more info about my workshops on my website, by the way.
And I start a different online workshop with the Academy of Quilting every  month.
Dyeing to Design (which covers many different kinds of surface design) in August;
Abstract Art for Quiltmakers in September. 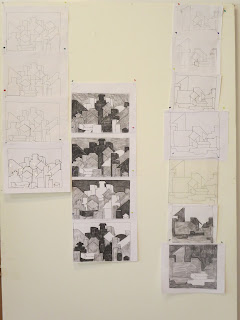 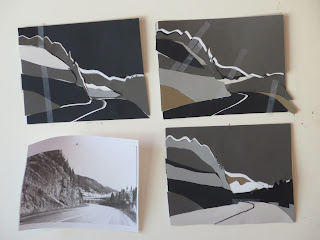 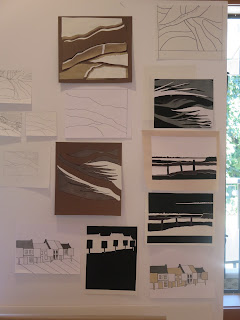 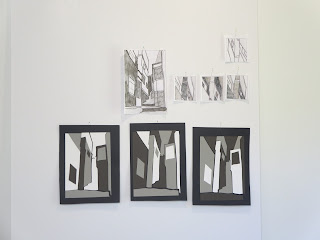 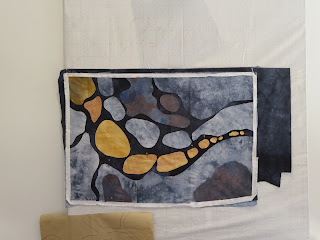 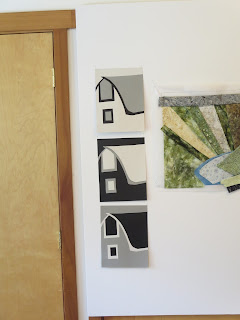 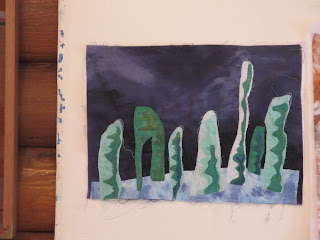 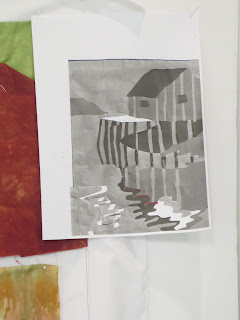 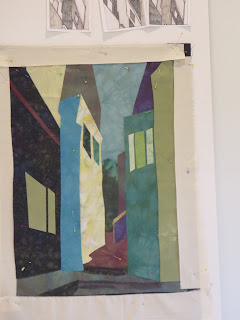 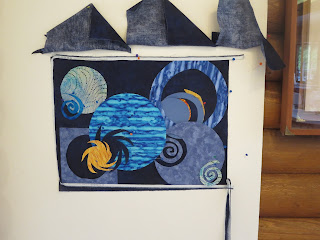 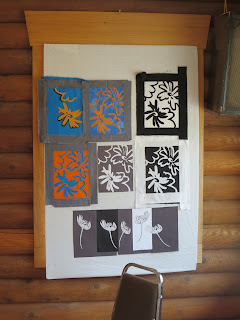 If you have been, thanks for reading and looking!!   Elizabeth
Posted by Elizabeth Barton at 1:31 PM 4 comments: 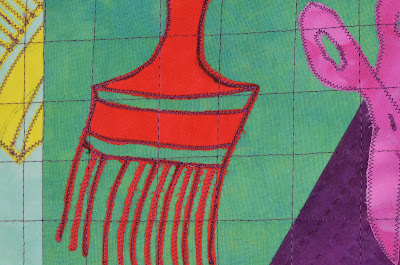 Unless you really really know what your doing!

Well why not?
I think the big reasons are:

1.  You can waste a lot of fabric - great for the fabric manufacturers and the shops! but...not so good for you

2.   You are more likely to play safe with color, fabric and shape choices, it will be much harder  to be really wild.  We do tend to fall back on the tried and true - there's no doubt!  And, in a way, the more experience you have, the more likely that is to happen. 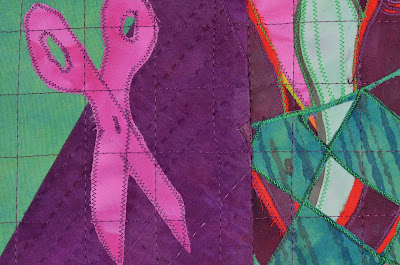 4.  You can also waste a lot of time - if you haven't decided where the darks and light go, for example, you might try the idea with a light background all cut out with dark elements on top and then think "oh no it would have been better  the other way round", then cut out everything all over again so you can see it the other way.  If you had had a simple sketch that you duplicated and then shaded in both way it would have been easy to see.  Even easier if scanned into Photoshop and values inverted.

5.  You are less likely to achieve your dream.  So many people say "oh I have this great idea in my head, but when I cut into the fabric and pin it up on the wall, it never looks like I've imagined."
That's because those imaginings are often largely amorphous (without shape), atonal (without values indicated), desaturated (few people, for example really do dream in color). 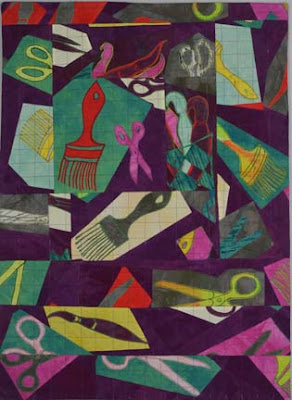 6.  When you're going to build a house or climb a mountain, it's very helpful to know the style of house you want to build, or which mountain you want to climb.  Seems obvious, right?
the same is true of a poem, or a piece of music.  For a poem you can't just start writing down random words "snipped" from the dictionary and expect a nice coherent, telling result.  And with music, random notes that are snatched from the air, sound like nothing at all.  They recently did an experiment in writing totally random music - no note could be predicted by the previous note...and they used all 88 keys on the piano.....the result was arid, formless, atonal, and utterly boring  - except to the mathematician who worked it all out!

Here is the link:

7.  and you know, those monkeys typing away randomly never did write a Shakespeare play!!

I really don't understand  the current mode in art quilting for  chopping directly into the fabric with no real idea or goal in mind...do you?

well, perhaps a nice cup of tea will help me sort it out!!
And, if you have been, thanks for reading!

PS my next blog should be from the Pacific North West where I'm headed shortly, teaching a workshop with a whole raft of new Power Point Presentations!!  I'm always saying "make visual decisions visually" and now I'm going to teach visual material visually too!
Posted by Elizabeth Barton at 11:19 AM 5 comments:

If you have been thinking about taking a workshop with me and also would like to visit a really beautiful place AND get out of  the heat, the opportunity is on Salt Spring Island * (just off Vancouver Island in British Columbia) in just two weeks.

The class was full, but a couple of folk have, unfortunately, had to drop out for health reasons, so there are some places left.  July 17-21.  Five full days of workshop in a gorgeous location in a fibre shop full of mouth watering goodies!!  Stitches Fibre Art Supplies   have asked me to come and teach my signature Inspiration to Design class.  I've been teaching this art quilt design class for some time and have improved it and added to it  every time I teach it so that it's both enjoyable and very very informative.

The class is about working from an inspiration - usually a photograph, but could be a piece of music, or an experience that you had - and developing several different designs.  We explore different ways of coming up with designs based on the inspiration.  I use both exercises and detailed Power Points to show how this can be done.  Once several designs are generated then I show you how to evaluate them, how to spot difficult areas, and how to fix them.

I also teach how to choose an effective color scheme, and how color can work for you to make a beautiful, eye catching quilt.

Then I teach how to make the art quilt from the A4 sized sketch (regular copy paper size).  As you work on blocking out your quilts out on the design wall, I spend a lot of individual time with you with personal critiques at the level that you desire.  Read Clara's blog to get a sense of how I like to work:

Many people tell me that getting a useful critique is something they have wanted for ages and found it very difficult to get.

You do not need to be able to draw!!  Nor do you need to be a master quilter....since I approach the design, the evaluation and the making in a very individual way...whatever level you work at, I will help you move forward with your art.  I really like having all levels of expertise in the classroom.
The masters can show their skill, but also learn from the different ways of approaching the tasks that the new people often have - those with no pre-conceptions.  It's a great mix.

You do need to be able to cut out fabric!!  However, you could manage very well without a sewing machine if it's a pain to haul it,   just pinning everything together ready to sew at home - or bring your machine if you wish.

I'm happy to answer any questions....and the link to Stitches Fibre Art Supplies  will bring you to their website and contact information.   Since this is a beautiful store with lots of fabric and supplies, you probably don't need even to bring very much with you!!

and think....cool!!
Of course I do hope that a nice cup of tea will be available from time to time!
If you have been, thanks for reading......Elizabeth