Working in a Series 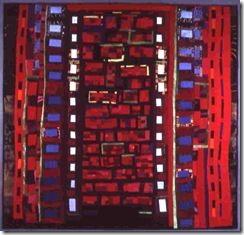 I’m teaching a workshop next week on Working in a Series and I’m really looking forward to it!  New faces, new scenery, flying south into the sun..and all that!

There are so many reasons for working in series.
After the first stages of elation of actually discovering Art Quilts and attending workshops in every last technique, style and embellishment, I think the serious Art Quilter needs to sit down and focus!  That’s where the real personal development starts.  It’s very interesting to me to observe this process in myself: in quilts I’ve definitely now worked through several series and really benefited.  But in the other medium I’m currently exploring (watercolour painting) I’m nowhere near ready to settle down to develop my own style, or paint a series of pictures on one theme.  I think it takes some exploration of different possibilities before one has matured enough within a 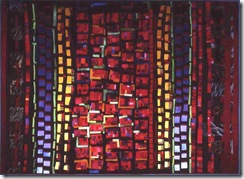 medium to be ready to think about a series.  I might experiment on myself though (single subject experiment!) and see if forcing myself into a series (even though I’m so enjoying gadding about trying this and that) with the watercolours might not lead to significant improvement.  I’ll report back on that one!  Interestingly there’s a long interview on line between Nancy Crow and  Jean Robertson on this very point.  Nancy stated that she began to feel that working in a series might be important even when she was an undergraduate, but it was never mentioned by the professors.  Even as a graduate student, the possibility was barely hinted at. 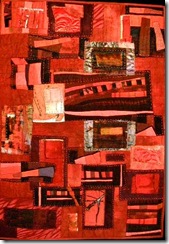 Working in a Series helps you to develop your own style, your signature work.  It is also useful in many other ways.   For me, it meant that I no longer put every single idea I had about my theme into the one piece!  yes! I was one of those kitchen sink junkies!  Trying to cram into a single quilt about 4 different ideas, talk about unity being lost!!  And forget harmony!  I remember one teacher looking at a piece very puzzled and then he said “it doesn’t seem to pull together”….At the time I hadn’t a clue what he was talking about, but now I can see it clearly. 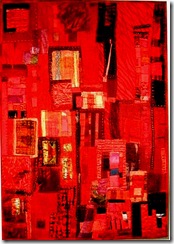 If you have 4 different ideas – say about daffodils.  Then, make 4 pieces about daffodils, each piece emphasizing a different idea.  There are obviously  other things you should do also of course: like trying to say and reveal things about daffodils that we’ve never seen before.  Which is another reason for a series.  Sticking with one idea pushes you beyond the obvious presentation of it.   Once you’ve got beyond the prettiness and cheerfulness of the daffodil, then maybe you can get to the daffodil as a dancer…or the daffodil as a herald (after all there is a trumpet!), and then the daffodil as translucent yellow layers with the low spring light behind them, then the crispness of the edge of the petals and the sharp crisp smell of them…and so on. 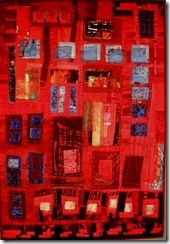 And you might have two or three equally good ideas for how  a particular feeling about daffodils might be presented.  If you are working in a series you can give yourself the luxury of trying out each different idea. 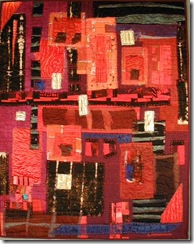 Another reason for working in a series is that it enables you to get better at actually making something.  Sticking with the daffodils for the moment…these would be a technically difficult image to either piece or applique (I’m ignoring the glueing!!).  But as you worked with the idea over several pieces you would build up a great repertoir of daffodil making techniques.  You don’t get good at something if you only try it once (at least that doesn’t work for me!).

Also, the more you think about something, the more ideas you have…they build upon each other.  You’re not going to fully realise your involvement with daffodils in one minute!  it’s lovely to give yourself the treat of exploring some in depth, not just skating around on the surface with the “usual” ideas about something, but allowing yourself to become really truly engaged with it.

so, if you have been, thanks for reading!  go forth and become a serial quilter…  Elizabeth
PS I didn’t actually have a series about daffodils to use as illustrations!  so the above quilts are from my Red Shift Series.

Posted by Elizabeth Barton at 7:47 AM

Intersting blog post - a friend of mine just took Jeannette De Nicolis Meyer at Asilomar about working in series. She has come to the conclusion that she definitely needs to make changes in her quilting life and will be focusing on the same thing. I'm not quite there yet though. (And I mean by art quilter.)

Always enjoy reading your posts Elisabeth. I loved the link to the Nancy Crow interview too. I have taken some classes at her facility but never actually with her.
Lots of good thing to mull over.

I have a question about working in a series. Sometimes when you see a series, the progression (not necessarily a straightforward path, but definitely movement)of the artist is quite visible from one work to another.

Sometimes, the change from piece to piece is almost undetectable. To my eye, it almost seems as though the artist is stuck. I would have to say that over the years I have found Nancy Crow and Michael James to be in the second category. After awhile the work stops speaking to me.

So, am I uneducated or unsophisticated in my vision? Or am I just looking for something else in the artwork that I choose to enjoy? Are both points of view valid, or do you have to work a series this deeply to be a "serious" artist?

I've just finished a series--in my
case it was about an architectural subject--and for me it was both rewarding and tremendously hard work. By the end, I knew the lines of the building intimately. Also at the end, I had the sensation that I had said all I had to say about the subject, and I was very glad I had said it. Thanks for your perspective on working in a series.

Good points (aka I agree with you)! I like your red quilts. When were those made? I don't recall having seen them before.

I thoroughly enjoy reading your blog. It's engaging and informative and provides lovely insights on design.

I have been working on art quilts about a particular subject (architecture) for a little while now. I haven't done an actual series yet, but that is definitely a goal.

Do you have any suggestions or guidelines about how to take a big, broad topic like architecture, which offers endless design options, and define a well-focused series?

I am looking to create a series of pieces that obviously relate to each other, but have substantial differences between the pieces and provide ample challenges and learning opportunities for me. I love your comment about how a series lets you explore beyond obvious ideas and interpretations of a theme.

Thank you for blogging!

Thanks for your blog.

I have been considering working in a series forever - I knew it would be good for me.

But I have not really done it until this week. And then, I opened up your blog and read this. Thank you Elizabeth.