Workshop: Working in a Series part 1

The Arizona Mavericks lived up to their name and produced an amazing variety of original ideas in a 3 day workshop last weekend in Phoenix.  I’m going to show half of them today and half tomorrow.  We talked about all the different kinds of series there were and they dreamed up even more possibilities.  They all committed to making at least 6 quilts in a series and promised they’d send me pictures…so I’m hoping!!  A series would be defined as a number of pieces that are linked in some way – but how they are linked can vary tremendously as you’ll see.  We also discussed the practicalities of working in a series, time management, motivation and why one should do it anyway.  But…now to the pictures: 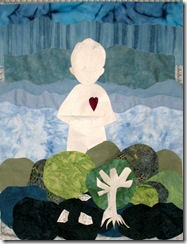 Claire conceived of a narrative series about Peter and the Wolf: there will be five quilts telling the story, one of each of Peter’s adventures, and then a final one where all the elements come together.  This is  final piece in process: across the bottom will be the wolf, the duck, the bird and the cat…as Peter remembers what happened.  As a really nice touch Peter will be dressed in fabric printed with the beginning of the actual score…it’s good to have a little extra something like that – not immediately obvious but a great surprise and interest to the viewer as they suddenly realise it.

Pam dreamed up two different series….the first one (not pictured) was about the desert cactus flowers…Pam has made documentary movies and her cactus flower series will mimic the movement of the camera as it begins with a wide shot and then zeroes in on the actual flowers.   A very neat idea for a series!
She also devised a series (of which the first 3 pieces are pictured above) based on doorways…the bold graphic images will be evident from a distance, but as the viewer gets closer, the quilting will reveal more detail.  A simple shape gradually becomes more complex. 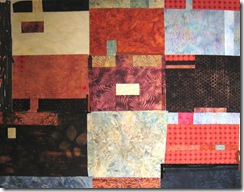 Diane drew out a wonderful series all based on a simple keystone block; these will be fairly large quilts.  Diane wants to work on the pieces in her series simultaneously as she  explores the possibilities of the block and its variations.  She will make 60 or more blocks in a rich colour scheme so they all harmonize and then arrange them into different configurations.  These will be very handsome pieces that have a very architectural feel to them. 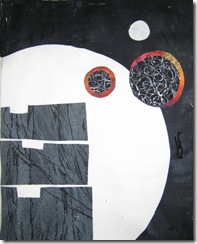 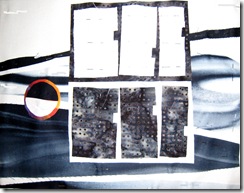 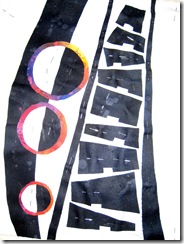 Margot came up with 3 stunning ideas mainly in black and white but with just a tiny touch of colour in each.  These are all based on a set of drawers that were in the workroom – plus one additional element; she also had a notebook of many other possibilities and I’m really looking forward to seeing them finished! 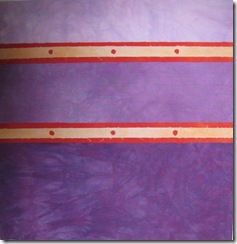 Linda actually derived her ideas from the same chest of drawers as Margot, however she has created something very different.  This was the first piece – simple and elegant.  It’s a lot harder than it looks to get such beautiful simplicity.  She has 5 more sketches in her notebook that become more complex and more dynamic – it’s going to be a great series.

Joyce had a wonderful sense of humour: she decided to make a series that are a little like a cartoon…there are small changes to each piece that tell a story of fish, bubbles and a ship riding high on the waves.
These were charming little vignettes and it’s a great idea to think of a series in this way. 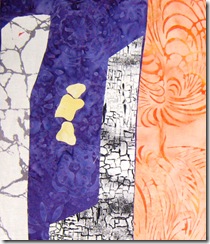 Jody devised her series based on one complex painting….she took different elements from the painting, simplifying it into delicious graphic morsels! 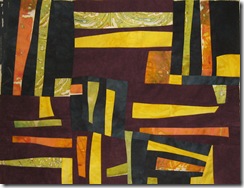 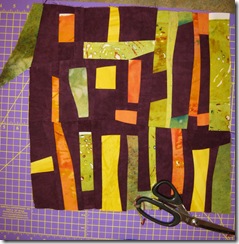 Marla worked up a series of at least 6 designs based entirely on 2 strips of torn masking tape and a label on the side of her sewing machine.  These made wonderful bold graphic elements.  In the series she hopes to combine these elements in different ways, and as you can see from the above, she is playing with the positive and negative shapes they produce.  Marla is a sewing fiend and had completed these two fair sized pieces by the end of the workshop!!  I wouldn’t be surprised if while I was flying home, she had two more done!
Do come back tomorrow  to see more!  Please respect these artists’ copyrights; I have their permission to put these images on my blog, of course.  I really enjoyed this workshop and this group was outstanding in their ability to take my suggestions and set to work and come up with so many different possibilities.
I’m teaching this same workshop in Fort Myers, Fl in October, by the way and also next year at a date and place not yet decided.
If you have been, thanks for reading!  And start planning your series!  There are a lot of different ways to do it.
Elizabeth.
Posted by Elizabeth Barton at 12:20 PM

I'd like to share the series of 100 lake pieces that I've been working on for the last couple of years.

Each piece has a different mood ... a different moment in time ... a different set of memories. Just as the lake changes from moment to moment because of the time of day, the weather, as well as the time of year. I've also discovered my moods that reflect what's happening in my life as well as out in the world have an effect on my work. I'm not sure I would've been conscious of that element without working on this series.

Another interesting revelation to me was that I cannot create one of these while looking at the lake. Observations that I've made during the day while I'm at the lake find their way into the quilt, but it doesn't work for me to make a "live portrait".

I've completed 68 lake pieces. The next 25 will work together to make one large lake scene that measures 9'wide by 7'high. If you'd like to see these click on the label "lake series" in my sidebar.

The workshop sounds like it was a great success and the work looks great! But I have to take exception to your comment, “Please respect these artists’ copyrights and do not copy their ideas.”

You can’t copyright an idea, which is probably a very good thing because if ideas had to expire with their originator, we wouldn’t have come very far in the way of science, literature, art or human progress in general. Some might argue that exchange of ideas is the very foundation of civilization.

Better to say “please don’t copy these people’s sketches or imitate their quilts – it’s so easy to come up with your own!”

I am using a "Mac" and for some reason none of your pictures came through. Darn! I am imagining what your creative students did. Sounds like the energy was flowing and swirling.