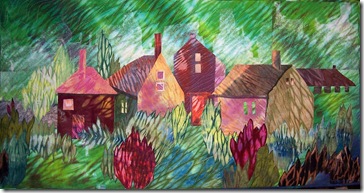 Recently I was writing some lessons for Quilt University (Inspired to Design, not yet open for registration but I’ll let you know when it begins) and in one of the lessons I wrote about the importance of colour and value in designing quilts. While I eventually decided to go with the old traditional Newton colour wheel, I began to think about whether it does really reflect what we know about colour.  For example, we’re told that adding two complementary (i.e. on opposite sides of the wheel) colours makes a neutral grey. When I add red to green, I get brown!! I always thought this was my personal failure!! (back to that convent school upbringing again!).  However, it’s more likely that it’s because the traditional  colour wheel doesn’t actually place complements  directly opposite each other.

We all know the Newton colour wheel: 12 steps with 3 primaries (red, yellow, blue), 3 secondaries (purple, green, orange) and steps between each of those which have double barreled names with the adjacent primary colour being first and the secondary colour on the other side being second e.g. yellow-green, red-orange etc.

It always struck me too, that there seemed to be a lot more steps on the warm side than the cool.   From yellow green through to purple there are eight steps  but as I look at the world I don’t see 2/3 warm colours.  So why is it that way?   Apparently, mainly for historical reasons relating to the availability of certain pigments!  (Remember Kuhn’s Nature of Scientific Revolutions?  we only believe science when sociologically we’re ready to believe it – witness the current widespread disbelief of climate change).  There were  more colours in the warm ranges available to painters…so there were more  warm steps on the wheel.

Munsell’s system, which has much more evenly distributed chromatic steps around the wheel, has been adopted by many different scientific agencies because they found it more accurately reflected actuality. There are lots of internet sites that address this but I suggest beginning with Wikipedia, and then reading James Gurney’s excellently understandable  series on colour wheels.

I’m going to try it out with watercolour this afternoon and with  dye when I start up the dye studio again this spring – out with the old! in with the new colour wheel.

If you have been, thanks for reading…Elizabeth

As color theory has always pulled me, I find this an especially interesting post.

If you look at my website (zoltanszabo.com), you will see that for many years, I worked with one of the outstanding watercolor painters/teachers of our time. He could make color do almost anything!

In choosing a red and green to get a neutral, it is important to note which red and which green are used. If you use Maimeri Primary Red Magenta and Maimeri Cupric Green Deep, brown is not apt to happen. Black can be the outcome and lightened to greys--with warm or cool leanings. It is important to test all the colors in combination to see what result you get. It depends on how you mix it.

Am I preaching to the choir?
Thanks. I enjoyed the visit.

As always, I enjoyed reading your post. In case you have missed it, a wonderful book about the history of color is Victoria Finlay's "Color. A Natural History of the Palette". It is a fascinating book

As Willa says, it depends which red and green! and a cool red will work much better to make a grey. and how fortunate you are to have had such a teacher - I'm warmly green with envy!

and thank you, Dee for the book recommendation, I'm off to the library website to order it!

I've been working on learning how to use color for quite a while now. I am using Joen Wolfrom's Color Tool and find it useful because I am not able to see for myself the fine distinctions. I looked at the Gurney site and think it's the same wheel Wolfrom uses; are you familiar with it, Elizabeth?

I painted quite a lot of colour wheels last year - it also depends on what paints brands you're using! Golden acrylics worked better than Liquitex but Winsor and Newton watercolours worked best of all (probably because of the high density of pigment and how finely they are ground)Also because of many years colour mixing experience!
Permanent Rose and Viridian makes an excellent grey with either pink or green cast according to proportions. Ultramarine and Burnt Umber for stormy clouds(with bonus of granulation)

yes I love ultra and burnt umber, and also cobalt and burnt sienna...I'm going to try them with dye too.
on with the greys!

I love the Nature of Scientific Revolution! I read it every once in a while to remind myself that the "authorities" aren't always right.

this post is right on for me this week. I have spent the last 10 days dyeing grays-some do have an unpleasant purply shift-and have had great fun.
I like to use a certain 3 colors but if one is careful titrating one can use almost any r-y-b, I believe.
It is kind of competitev with myself-will it be gray?

Most colour theory is based on light and not on pigment and this is where it falls down. Pigment does not behave as light does, mixing all the colours does not give white!!
I've always worked on the pigment colour theory that there are 2 colour wheels, a warm one and a cool one.
When people tell me there are only 3 primaries, I get them to name them, give them those colours and ask them to mix to make a colour I know they cannot make, so if they say red, yellow, blue - I ask for emerald green, you need turquoise and lemon from the cool colour wheel, cant be done from the warm one!!
Just my 02 worth, after a LOT of reading/playing!
Rosie
theduckhilton.blogspot.com

I have always felt slightly left out when people start going into thrills or worries about the color wheel. For those of us who neither paint nor dye, the whole concept of mixing colors is kind of academic.

As an intuitive / never-went-to-art-school type, I put pieces of fabric together and decide whether they look good. My use of the color wheel consists of the knowledge that a color is pepped up by its complement and calmed down by its meighbor.

I sometimes wonder whether my art would improve if I knew more about color theory, but I get the feeling the information would be 90% about mixing pigments.

I think it's helpful to know colour theory basics in order to develop strong colour schemes for a piece and especially when you want to be able to emphasize certain areas. But you don't need to know mixing recipes if you're not mixing!