Self improvement and the art of successive approximations

I had some interesting comments on my first Self Improvement post, which lead me to further cogitation! 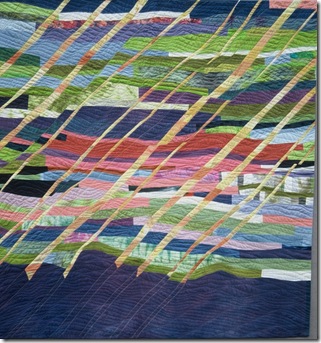 Self improvement, of course, is based on learning…so it’s important to figure out the best way we can learn to make better work. While it’s logical to think that the development of a good piece is totally linear: deciding the theme, then designing the piece, then constructing then evaluating, research shows that this isn’t really what happens in the best learning environments. We don’t need to follow this sequence so strictly and will learn better if we don’t. It’s like the old work on grief – it was thought there were 5 stages of grief and you had to progress through them one at a time in an exact sequence; people got worried that they were going in the wrong order, or “hung up” because they would appear to revisit a previous emotion…now we know that it’s perfectly normally to experience all the emotions in any particular order, or not to experience some of them.

So in our art work, we don’t necessarily have to follow the “steps” in any particular sequence, and having visited a step, it’s fine to revisit later. We may start a piece with a particular idea, like for example the piece I’m working on right now began with a study of a detail of a detail (sic) of an industrial landscape. But as I neared the end of it, I realized that the quilt was more about the light at a certain time of day on such a landscape…the theme of time (as ever) had crept back in! And so I went back in and modified my design to show that aspect better.

Our creative work is ongoing…the whole meaning of a piece is unlikely to be 100% revealed right at the beginning. I think it’s important to have a beginning (I know not everyone does, that’s fine – we’re all different!), but I also know that the characters (i.e. the elements) that I set up at the outset may easily develop some life of their own and start skewing things a little. We may well not have the knowledge of all that we want to say about something right at the outset. Creative ideas don’t come out all at one go and then dry up..they keep coming as we work on the piece. That’s why I’m against drawing out a full life size cartoon of the design and using it as templates. Doing that blocks continuing creativity.  Would you believe I practically have to take away the car keys of people in my workshops to stop them from dashing off to the nearest copy shop?!!

Start with something…and then allow yourself to learn by the continual stepping back and assessing. This is actually the method that has been used to develop Artificial Intelligence – I know nothing about this by the way and they may have moved on since I last looked! But the theory, as I learned it, was that it’s impossible to design a perfect intelligence from the outset. It’s better to develop a machine that can learn as it goes.  Which of course is what we are if only we allow ourselves to do this!!

I think the ideal sequence would be to draw out a rough sketch, which as a composition largely works i.e. across the room works…then begin to block that out on the design wall….
gradually adding/assessing/improving/adjusting as you go. And thus by successive approximations get nearer and nearer to the goal.

I have some more improving thoughts (!) but will save them for later in the week..meanwhile, if you have been, thanks for reading! go forth and learn!   Elizabeth

Posted by Elizabeth Barton at 6:42 AM

The more I read your blog the more I look forward to taking your class in April at QU.

Thank you for so generously sharing your thoughts and experience.

A term that suits this approach is "dynamic creation". I call it a "conversation" with the piece when it gets to that point of having taken on a life of its own. It's this part of making art that excites and rejuvenates me.

You are right about the process not being linear. If you are not going in circles, you are probably doing it wrong. And they don't have to be perfect circles.

You start with a postulate, an assumption, a theme, a goal.

You try something you think might help develope that gosl, theme, postulate, etc.

You observe what happens.

You evaluate what happened. Is it what you expected, wanted, visualized?

You analyze what happened. Why did you get what you got?

Then you start all over again.

The process is iterative and it is different in its details every time. With each iteration you get closer to your final result.

The difference in developing as an artist and developing a work of art is important. When you develope yourself you change the thing that does the changing.

The best place to learn is on the job .... you learn what you need to know when you need to know it. I f your job at the time is creative the learning is much more fun, and the lesson will be remembered with pleasure ..... unless it involves too much reversed stitching.

By the way, my word verification is 'presser' .......... this comment may not be published unless I resist the urge to add 'foot.'

How pleased I was to read that you don't always know what about a certain scene, etc. has captured your attention--turns out it wasn't what you'd thought. Thanks for sharing that, it happens to me all the time. I think I'm improving though.
Also, I do make a full-size plan and find it helpful to do so. I prefer to piece and hand applique so I need the seam allowance. Having a plan doesn't stop me from changing it, heavens no! My plan is no longer as complete as it was, but I like it full size. Actually I have it on an overhead and copy onto freezer paper only parts at a time, very easy to modify and I don't have to pay to have it printed large. I just don't move the overhead projector. Thanks for sharing all that you do!