D’you remember the “old days” when the self help books were on “self improvement” rather than “Embracing your Inner Guilt” or “Discovering your Weekly (or was it weakly?) Colour” or “How to Smell your own Armpits”?  I know self improvement is an old fashioned idea but that’s the point I’ve reached in my art journey.  I’ve got most (or at least enough!) of the techniques down, I know how to paint/dye/screen etc luscious fabric (I have cupboards full of the stuff to prove it!), I have a working method and (I’m told) a reasonably distinctive style…so how do I reach the Next Level.? For, I think, in a artistic journey  the paths we take should always lead higher. 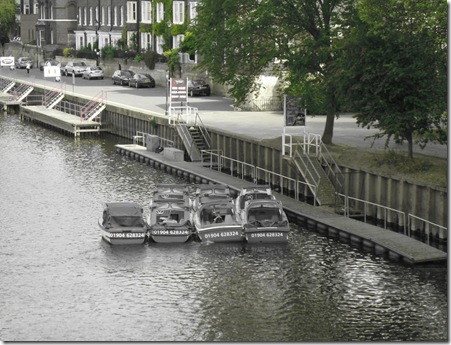 Which, now I come to think about it,  is different from ordinary life where there is a point where enough is enough – once you’ve got those things at the bottom Maslow’s triangle: food, shelter, safety etc you don’t (I think -  though certain politicians might not agree!) actually  need more of them.  You don’t need more food than you can eat, or more shelter than will cover you in your activities, you can only drive one car at once (though I did once see a man steering 7 boats at once down a river!) (see left!)

so, how to get there from here…

Work: one thing upon which all agree is that a key feature is the amount of work you put in.  All the people whose work I really admire have been working day in and day out for years and years;  they don’t allow themselves to be easily distracted and are very focussed.  How much time is necessary?  well the evidence is that daily practice is much more effective than the same amount of time concentrated into a short period of time, with a noticeable gap before the next practice session.  This is clearly evident with the crazy long summer holiday that school children get – teachers say it takes them most of the fall term to get them back up to where they were before the summer break. So, some kind of creative work Every Day.  No excuses.

Guidance: you also need to have some guidance.  The musicians who achieved most in the psychological studies were those who put in the time but who also had excellent teaching or coaching.   Listening to people on the talent shows who have wonderful voices but have never had any training reveals the importance of training.   But the guidance needs to be very skilful,  enough to nudge the person away from pitfalls (like getting into the habit of using the same composition over and over, or the same colour scheme, or making work that really is too accessible and therefore has no lasting power).  Pitfalls like that I know I have had to overcome!  You don’t want the kind of guidance that tries to push you in the direction preferred by the guide – as I have noticed when talking to people in workshops.  I’ve asked “why are you doing it this way” - “oh, because that was what my last teacher liked, but……”.    Hmm!!

A goal: I think you also need to know where you want to go.  Where is the top of the mountain for me?  is it acceptance by a certain type of show or museum?  Is it to to sell work?  Is it to have hordes of people begging me to show them “how to do that”?  Or, is it to make work that I find satisfying, a year later.  Work that I can pull out of the cupboard Next year and say “Wow I made that?  It’s so fresh, so clear, but so intriguing…”.   It’s helpful, too, to look at the work you really admire and try to figure out the qualities it has that you would want in your own work.  Choose your own end goal;   none, in the great scheme of things, is any better or worse than any other (except owning 8 houses, now that I think is excessive!) but make a definite choice.

A plan to reach the goal: this is the hard part of course!  I’m prepared to put in the time, I’ve got a little guidance lined up (though sadly I feel many are reluctant or unable to provide this), I have a goal.  Now I need a plan.   Obviously a time plan and time management must be part of it, but I think the key might be a two part activity of experimentation and assessment. 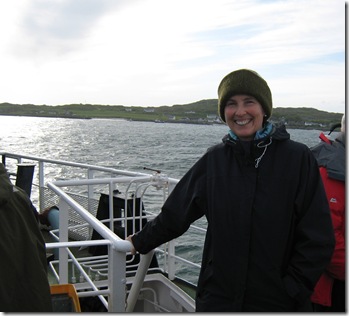 Experiment: if you’re trying to get to a new place, you’re not going to do it following the old paths.  You have to strike out across untrammeled ground and may easily end up nowhere,  but you have to take that risk and try it.  And be prepared to take time on it, don’t just repeat the steps you know work, but see if there are other possibilities.    Everyone probably has a different tolerance for how much experimentation they can allow themselves, realise that and try to push just a little bit further.  Honestly it doesn’t matter if you make a mess!!

Assessment:     Having experimented for a while, then step back – and Look.  No excuses.  Is what you’ve made any nearer to the goal?  If not,  ruthlessly discard anything that’s not working.  It might take lots of experimentation to reach the next level, attempts at each face of the mountain…but better, I think, than just going round and round at the same elevation.

And now, to go and try it!  Self improvement!  but first, a cup of tea, while I cogitate upon it….
if you have been, thanks for reading!  Elizabeth

PS  if you have discovered any more essential activities in Self Improvement, please comment!!  I’m (virtually) listening!

Posted by Elizabeth Barton at 6:54 AM

Excellent! Do the work. Increase time on task. I've done that and find myself more and more excited by what I'm doing! Sure, I get stuck and frustrated, but breaking through is so satisfying that problems cease to exist. I know I can overcome them. What a joy to work!

Messes are good. They show you are stretching. Study those messes....yes do. Save the good, throw out the less than good or at least put them away for a a bit....then get them out again. It all goes into the mix that will feed your creativity. Love your articles.

Your list of self improving activities was: Work, Guidance, Goal, Plan, Experiment, Assess.

I would re-organized it thusly: Goal, Motivation, Plan, Supervision.

Goal
You need to know where you're going or you'll end up someplace else. And you need to be specific. It's no good saying I want to be rich. How rich do you want to be?

Plan
You want that million dollars really bad. How are you going to get it? You need a plan. You need an overall strategy. Maybe you decide to earn it designing, sewing and selling quilts. Next you need specific tactics. You decide to set up a rigorous daily work schedule; seek guidance from other quilters; concentrate on pictorial quilts with contemporary themes.

Supervision.
How well is your plan working? you need to know or you'll be spinning your wheels. If what you're doing isn't getting you what you want, then you need to try something else. I see this as a four step process. First, you experiment, you try something new, you take a risk. For example, you might join a critique group. Second, you observe. What happened? What were the results? Who offered critiques? What did they critique? Third, you evaluate. Was what happened beneficial or not? Were you happy with the critiques?Di you get enough criticism? Fourth you analyse. Why did what happened, happen. Why was it good? Why was it bad? Why didn't you get the critiques you wanted? When did you get useful critiques? If everything is going according to plan,then that's that. But if not, you go back to step one and try something else based on what you've just learned.

To be honest, making a million bucks is not my idea of the ideal self improvement. But it is an easy example to use.

My final thought is that having a list of things to do for self improvement is a good idea. having and organized list is even better. It really does make a difference where you put the paints on your palette.

I think you are speaking directly to me!!!! (and I love exclamation points!!!!!).

Good ideas. I think the most overlooked one is assessment. If people don't carefully evaluate what they have done, how will they decide what to do next? How will they know what to avoid in the future? How will they recalibrate their goals and workplan?

Thank you for an excellent post. I often get sidetracked - doing a great project - then realizing it does not move me towards my goal.

As a weaver, I find sharing/giving is an important aspect of self-improvement. I think that is the main reason your blog is so rewarding to you. It has certainly been a gift to me. Thanks!!!

This is a fantastic post! I disagree with Wayne, I think that the work must come first. And only when I show up at the quilt (or canvas - I'm also a painter) that any forward movement happens. I think the work feeds the other areas - for me anyway. Thanks so much for writing this. As soon as I finish my tea, I intend to go make a mess! Bravo!
Cat
PS I found you through Deb Lacative's blog - more wiffs and glimmers...

so how does one find a person to provide guidance? and honest reponses to one's work?

I need someone badly...a mentor, a critic, somebody!

Thank you for your wonderful posts!