One of the reasons I was very attracted to quilts initially was the idea of tiling.  By making different designs (yes I started with the Sampler Quilt – and how horrible they were!) and putting them together into orderly rows of the same size you could create a coherent composition.  Like one of the old parterre gardens, or a herb garden, there’s something very soothing and predictable about a grid.  I also loved Jennifer Bartlett’s work where she painted images on metal panels about a foot square and then created large installations of them. 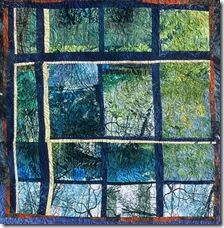 It is said that the square is more awkward a shape compositionally than a rectangle, but the beauty of a square is that you can arrange squares in a grid form, and rearrange them, far more readily than a rectangle.  It’s important to address the difficulties of the square format of course.  It is so stable a form that the main elements require a dynamic arrangement in order to counteract that solidity.

At first I used the grid within the piece as a whole (as above in Elkmont), but I have once or twice made separate grid  squares that could be displayed as a unit – below was a sequence of Hours.  I’m sad to say I didn’t get beyond 10 am, 1pm and 8pm!   but…maybe one day! 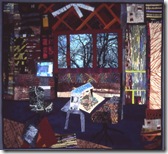 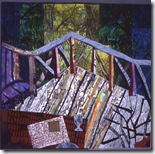 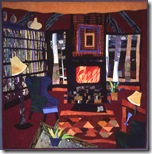 Most of the shapes we use developed centuries ago and were probably related more to pragmatic things like the shape a canvas came in, or the shape of the wall the Roman or Egyptian well to do wanted painted than to any artistic or compositional ideas.    Now we can go beyond pragmatism – well at least medieval practicalities! – and choose our  own shapes.

Whatever the shape,however,  it is still true that planning the compositional structure before you begin  leads to much stronger images, images  that are unified rather than haphazard as well as being more attention getting.  Leaving things to chance can work and it’s great when things happen spontaneously to fall naturally into place…nature is good at this!   But nature has volume on her side….she will produce hundreds, thousands of seeds which are scattered hoping that a good result will happen maybe 1% of the time.   I don’t know about you but I want a little more than a 1% success rate with my compositions!  There has been a tendency in the latter part of the twentieth century for artists to abjure preplanning but this is very recent.   Until this “post modern” era, artists carefully planned out  every aspect of their compositions. I suggest you judge for yourself as to which you prefer!

But…back to the square:  stable and solid and, therefore, I think able to support some shenanigans within!  It’s great to be able to play off large curves or swooping diagonals within that strong structure.   And, if you square the square (as it were) by making many repeats, you can have a lot of fun arranging them into a grid.  The New Image group in Washington DC did this with their Hive piece which is a wonderful roomsized quilt composed of hundreds of one square foot quilts.  Rarely shown, alas, because galleries don’t want to think about all those nail holes!

And so, you might ask, why am I wittering on about squares and grids?  Well because that’s what I’ve been working on these last few weeks…soon I hope I’ll have reached the point where I can begin to have fun arranging them, I have 3 that are complete and 3 more in various stages of construction.  It’s great to have a Big Plan, an overall compositional plan for the year!

if you have been, thanks for reading!   Elizabeth
all comments most gratefully received…..

Posted by Elizabeth Barton at 7:39 AM

I've always been a lover of grid format, perhaps because I came via a love of traditional quilts and for many years didn't even know there was any other way to make a quilt except by making a bunch of blocks first.

Since I have become more trendily postmodern in my thinking, I like the reasoning behind so much of new art: the grid allows you to arrange many elements without making value judgments about their relative organization or importance.

I'm enjoying your musings. Thank you for them.

A comment on planning: when I was in England and doing my City and Guilds, my tutor commented that we were in a "post skills" era. This was with specific reference to Tracy Eamin's Unmade Bed. I'm sure there was planning that went into it, but really no evidence of skill, in that or in her drawings. I think that we don't want to over plan - serendipity is lovely if we can recognize it's role - but we do want skills to execute our ideas well.

I recently saw black and white photographs of industrial sites by Hilla and Bernd Becher. A set of like images, for example water towers--all similar but each one unique--was arranged in a grid, about five images square. Each photo was individually framed but the effect was greater than the unit within the array. It was a quilt! And a powerful example of the integration of similarity and diversity!