The Benefits of Reading and Value sketches! 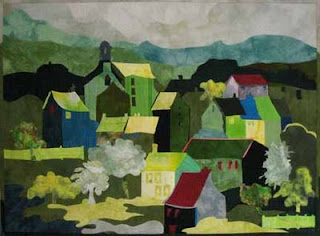 When you’re feeling a bit like the barrel is empty, the well dry and the old horse out of feed, turn to literature!!!
Yesterday I reread some of Edgar Whitney’s thoughts on painting, and also some of Charles Reid’s writing and some journals – I like Art in America and International Artist - but there are a lot of good ones out there. Both Whitney and Reid have published excellent books on painting which I’d recommend. In some ways these two artists are at complete odds with one another! Whitney firmly believes that it’s vital to know and follow basic compositional guidelines (unity, harmony, balance, tension, etc ) and he emphasized that over and over in his workshops.
Whereas Reid says someone with nothing better to do devised the rules of composition!!
His reason is that following the rules might lead to overly safe, correct and boring work. Bonnard often broke the rules, he points out - he rarely had a so-called focal point, and often put important elements on the boundary or corner. However, having written that, Reid goes on to give his rules. I do love the way people do that – I remember my first class with an extremely well known teacher who began by demanding we “throw out all the rules!!” then she said: “now, you must do this and this and this and this….”. Nothing like a nice contradiction to whet the appetite for a workshop!

Going back to Charles Reid. Here are some of his ideas (and yes they definitely overlap with Whitney’s ideas but we won’t say that out loud!!):

1. don’t compose with lines – it’s shapes, color and values!
This is so true with quilts – it’s not till we get to the quilting that we have a line to play with….and it’s important to remember this when looking at sketches – if you just draw the shapes you see white shapes with black lines around….you don’t see that these shapes are a solid colour until you put the values in. All compositions should be viewed as an abstract arrangement of shapes of color/values in relation to each other. (the basic elements from which 2D art is made). And in order to stress the importance of the value studies – both to you and myself, see below for an offer!

2. be aware of the placement and size of your objects in relation to the size and shape of your paper – and to the other shapes. (balance, proportion).
I think it's good to get this worked out on paper ahead, of time, but also as you begin to block out the quilt on the wall to step back and assess the relationships constantly.

3. backgrounds and surroundings are hard to compose – always plan ahead-
for quilters this step is easier as we usually begin with the background and then build up from it..but I think it’s helpful to consider the impact of different values of background. Many a time I’ve composed my entire image and then decided it would have been much better on a differently valued background – should have done that in the sketch stage!

4. Reid also advocates
i. a crowded foreground – little background
ii. objects connected to 3 borders
iii. dark colors one side, intense colors other side
iv. strong colors at the borders
v. warm and cool colours juxtaposed
All of these ideas could be borne in mind when evaluating a piece – especially if it’s looking a little boring, or a little chaotic.

5. Reid doesn’t like a focal point.
I think that sometimes people get hung up on the idea that there has to be one single small focal point. In actuality, the main area of interest can be a significant proportion of the picture/quilt…but you always need some quiet areas to give contrast to the more stimulating ones. And in fact, elsewhere Reid has written – there should be detailed areas, and blurred areas, soft areas and sharp areas, lost edges and found edges.... So as long as there is some variety, some interest and t he viewer is encouraged to look at all the picture/quilt then all is well!!

Regarding the magazines, I read where one artist (Paprocki) always begins with an underpainting in the same value but opposite temperature to what the finished area will be. I’ve also seen underpainting like this on some of Schiele’s work and been intrigued by how much it can enliven a piece – something else to add to one’s tool box!
So please, when you have one of those dry, dull periods where you’re wandering round the house looking for chocolate rather than engrossed in the studio, take to literature! It won’t be long before you’re thinking – hmm….now that would be interesting to try!

OK The Offer! If you took one of my workshops, and you’ve continued to do at least 2 value sketches before working on a piece, email me the evidence!!! I will put the sketches up on the blog to illustrate the importance of value sketches and send you a free packet of my postcards!!

And, if you have been, thanks for reading! Elizabeth
PS The quilt at the top is one where I was experimenting with an "underpainting" technique, layering some of the colours. A quilter who does this superbly is Dominie Nash.
Posted by Elizabeth Barton at 4:28 PM

I find it surprising that most quilters start with a background and then work on top of it. Normally, I design the foreground and/or the focal point and THEN design the background to suit it. I have been even known to piece the focal point first and build the background around it. Lately though I do make most of the value decisions in the design process - which easily clarifies what is going to be what during construction.

Thank you! Thank you! I'll be sending some value studies! Please continue to teach us.