Is Colour bad for you? 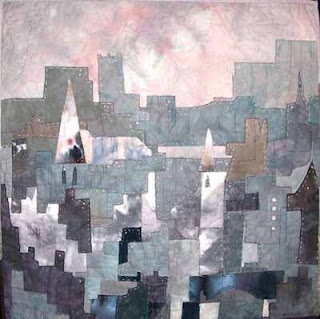 I thought it was just because I was peculiar that I get into certain colour grooves!
Sometimes I only want black and white, other time purple+orange+red is the only thing that will satisfy my appetite. One year I was totally bemused by grey. But it turns out I’m in good company!! Both whole societies and individual artists have at certain times prescribed or proscribed particular colours.

Colour has sometime been considered nothing more than decorative – it was though that if you exploited colour in your work it would turn it into nothing more than “eye candy” – and of course there’s some delicious candy out there!!! Bridget Riley was accused ( I think unjustly but then I’ve a sweet tooth!) of this with her switch from the optical black and white pieces to the coloured ones. There’s a nice range of her images here.


I love the snooty remark from Le Corbusier and his friend Ozenfant:
“Let us leave to the clothes-dyers the sensory jubilations of the paint tube”!!!
However they, and many others including Picasso, did enter the Elysian fields of colour leaving the rather “ascetic chromatism” they had previously espoused.

On the other side of the Atlantic, the reverse happened with a number of painters turning to black and white, or grey.
There’s a lovely painting by Frank Stella called Jasper’sDilemma where he comments on this: 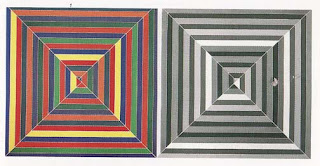 The idea that colour would detract from a design, and the belief that value and line were more important to the strength of a composition goes back to Renaissance times, if not further. In fact research with newborn infants has shown that they respond more to high contrasts of value (as seen with the eyes, eyebrows and hairline of the mother’s face) than to bright colours.

In ancient Rome it was felt that the use of too much colour indicated a lack of moral restraint; Pliny complained about the concentration of interest on the expensive fabulous colours, rather than on the genius of the artist. Of course centuries before that, colour was used extensively – many of the beautiful Grecian marbles that we see today in pure natural stone colour were originally painted. However Pliny’s view persisted, with the morality of excessive colour being called into question – especially in religious settings.

One of the most extreme negative views on colour was expressed by Al Reinhardt in his series of black paintings. “Someone once asked me about colour and I used the occasion to mention a number of times and places in art where color was excluded. ..There is something wrong, irresponsible and mindless about color, something impossible to control. Control and rationality are part of my morality”. (panel discussion in the 1960s) He was quoting from Lao Tzu’s Twelve Rules for a new Academy where Lao Tzu really lashes into the evil aspects of color!

Black had become popular in 19th century European painting too even though some complained it looked like everyone was in mourning! (Baudelaire). But the value of the dark black enriching and contrasting the few brighter colours was unmistakeable. Look how brightly the red cummerbund glows against the black suit. 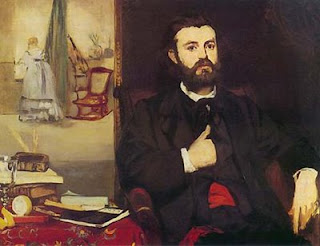 And then the gorgeous greys! Of Jasper Johns of course, but also Whistler and Richter…and the Andrew Wyeth watercolours. (we mourn his passing of just 3 days ago).


So how do these ideas and these precedents relate to quiltmaking today? I think it’s important that we use color wisely, that we respect its huge impact and value and don’t just slosh it around adding it everywhere like sugar is added to so many foods. We need to enjoy a smidgen of a taste, we need to let it work with the strong flavours of black and white and grey and not dull our palates (and palettes – it's not for nothing these words sound the same!) with a surfeit of sugar and sweetness. We need to respect the meaning of colours and how much can be conveyed by their use, over and above the actual physiological reaction. It’s the psychological reaction that is paramount.

And, if you have been, thanks for reading!!
Elizabeth
PS A lot of the colour ideas I’ve been writing about recently have sprung from my reading Colour in Art (yes it has a ‘u’!) by John Gage which I’d definitely recommend.
Posted by Elizabeth Barton at 7:49 AM

Such a huge subject, and I have been enjoying your posts on it. John Gage's books are thought-provoking, aren't they.

When I started in publishing nearly forty years ago we had to separate colours ourselves for illustrations - into the appropriate flat areas of yellow, cyan, and magenta, and so we very much appreciated illustrators who produced wondrous black and white drawings.

I love the challenge of a restricted palette, yet on the other had love to blend tones and shades to build up a different look at different distances.

Very timely and very interesting. I am working on a small piece right now using black and white, black and tan, and grey fabrics and enjoying the play of visual texture. It is a revelation.

Very interesting ideas about color - I am reassured to see how many different theories have existed at different times; it allows one to pick and choose for current theories! Like you I have been feeling urges for a different set of colors to work with. Change is in the air!