The Perils of Overworking 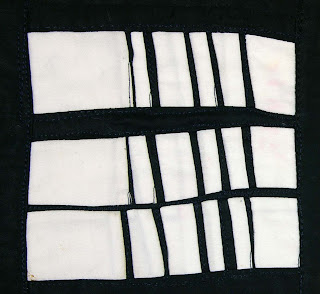 Parallel events are always fascinating! You know how you hear of a place you’ve not known before and then the same day read about it in the paper? and later get an email from someone living there?
The other day, I was
a) discussing an artist’s work saying that I thought it was fine and it was time to stop
b) was asked by someone at the other end of the country how long one should work on a piece, and
c) read an interesting post on Katharine Tyrrell's excellent blog “Making a Mark”
which addressed the same idea.


Katharine Tyrrell was writing about her New year’s Principles. It really is a universal truth that the First Commandment of all who wish to excel is Do the Work, put in the Hours. It has been suggested that 10,000 hours are necessary for excellence in anything. I’m always a little suspicious of nice round numbers like that so I would say probably 9,546.33 hours are enough!! This adds up to 3 hours per day (or 20 per week) for 10 years – I know many quilters who are putting in that amount of time so I really think that it’s possible. I do know that I’ll achieve excellence in emailing in a lot less than 10 years!!

The flip side of this, according to Katharine, relates to the question I was asked and the advice I was giving re how much time one should put in on an individual piece. Katharine emphasized that one should “know when to stop”.

Knowing when to stop is crucial for an art form like watercolour. You can easily see the difference between a watercolour painting where the artist has stopped just short of saying it all which allows you, the viewer, the opportunity to use your imagination (and your Gestalt abilities!) to complete the image…and a painting which is overworked where the freshness and spontaneity are gone, and the piece is dead, overstated. I think the same thing happens with books – I want an ending, a resolution to the main plot, but I really dislike it when the author then in one paragraph tells you all that happens to those characters in the next 20 years (sorry, Joanna!). It’s like having to parse a dream – to do it, you pickle it!

Now is the same thing true with a quilt? Can you overwork it? In my experience: yes! Yes! Yes! There is a vogue right now for quilting things to death – I know I’ve been guilty of it too. But the better choice would be to quilt only to bring out the main idea…and no more. In terms of details…you don’t need to spell out every detail in a building, suggest them…put details in the important areas but allow the others a softer focus. In my own process, I begin with my idea, and then many sketches, of which one or two (I often add them together) is chosen, then I glance at the sketch repeatedly as I begin to construct the piece on the wall. In nearly every piece a point comes where I stand back and begin to Take Away the excess…simplifying, simplifying…

Unless obsession and perfection are the Main Idea, the backbone, or your work – say enough – but no more! On which point, I’ll close! In my next post I’ll talk about my New year’s resolutions!!

And, if you have been, thanks for reading!
Elizabeth
PS. At the top is a very spare detail from The Affluent Drainpipe currently in an excellent show curated by Jeanne Williamson at the Danforth Museum in Framingham, MA. See her Jan 5th post.
Posted by Elizabeth Barton at 6:41 AM

I too constantly preach - Just do the work.
You can't help but get better.

As you look at your collective work, eventually you come to a place where you say "Gee, I think I got it. At that point you can stop - or you can go on and say "And what else can I do to make it even better, different, simpler, etc."
K

An artist friend once told me it took two people to make an artwork: the person doing it, and someone she trusts to tell her when to stop!