The Road to Improvement 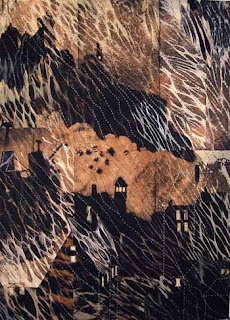 I came across a great post on becoming a professional artist the other day by the photographer Daoued Bey,professor of photography at Columbia College Chicago; he said one was free to pass along all his good advice!! So I thought I’d take the opportunity to mention his main points referring particularly to the Art Quilt world.

It’s very interesting to me that buyers seem to have a more discerning eye than jurors! I’ve had some horrors juried into shows (yes I know I shouldn’t have entered them – but somehow it’s hard to resist entering 3 pieces – two strong ones and an also ran…) well, not real horrors, (at least not by me!) those never leave the design wall, but definitely weaker stuff. They’ve picked the weakest one and passed over the stronger ones (to my mind). But I’ve noticed that buyers have a true eye – they go for the good stuff!! I think it’s important to make every piece as good as you can – and that might mean taking more time – especially at the initial design stage. It’s a difficult frustrating time I know!! One thing that gets me through that stage now, (after 200+ pieces nearly all of which gave me significant birthing pains!), is the knowledge that I probably will be able to resolve the problems. If I just put in the time, and take my time and keep on adjusting each problem area…then taking another photo…looking at it on the computer (you’d be amazed at how well I can critique stuff on the computer!)…leaving it a day or so …

The work has to be good!! If you’re not selling and not getting into shows…something’s going wrong.. maybe you’re a hermit waiting for people to discover you (actually there aren’t too many of those left!!), maybe you’re not entering shows, or the right shows…or maybe the work needs to be stronger.

Put in the time.

It does take time, nothing in – nothing out!


Hang around people who are better than you think you currently are.

This can be very difficult, but I’ve heard this advice many times in sports and games situations – you won’t improve at card games, or Scrabble or tennis etc if you consistently play with weaker players. I was lucky enough to get invited to join a group of excellent art quilters who meet once a year to compare work. Since then (1996) I would say my work has definitely improved. When you’re soliciting advice from those who are better, you don’t have to agree with everything they say obviously, but you’ll learn if you Listen to all they say. I’m so grateful when people will take the time to discuss my work with me and not just fob me off with a “it’s lovely dear, d’you fancy a cuppa tea?”

Show your work to as many people as possible.

I carry around a few postcards of my quilts – business cards are too small I think to see a piece…and I hand them out to anyone who will look…of course a lot just respond with the cup of tea thing (see above!) but now and t hen an opportunity arises as a result. Or they make a really interesting comment that sets you onto a creative train of thought.

Occasionally they’ll chuck the card in a waste bin as they walk away (yes I’ve had that happen!) – at which point you try to figure out why….was it the work that was poor? Or just not interesting to them? You can learn something! Don’t take it personally though – it was just the postcard that was trashed, not you yourself! It’s also helpful, I’ve found, to have postcards of more than one piece, that way you can say – these are some of my pieces, which d’you like the best? If people are completely unresponsive…something’s going wrong…


Know the quilt world and where your work fits in it.

I’m always amazed when I talk to quilters who say they are trying to make a career in quilting but they don’t know the key players and the important shows. It’s also important to know which shows to enter – I was reading someone’s resume the other day and Five Best of Shows in quilt shows were mentioned …..I thought wow that’s amazing…then realized that although I’ve never had a BOS in a national quilt show I have had them in art shows. I try to be aware of the work of all those I consider to be the best and I also figure out why I think their work is stronger than mine – how can I improve my work to their level?

Keep in touch with people

Bey stated that he had had many exhibitions that were the result of keeping in touch ….I certainly have had one or two, and I have missed out on some key shows because the organizer didn’t know me…this is a hard one for me because I’m not a natural networker – and moreover the next big opportunity (QN ’09) I’m even out of the country!

I’ve not been able to do this in the art quilt world per se here in a small college town in , however I have found it helpful in the general local art world. What is happening in your local art community? Any shows being devised? Open studio days? Organizations looking for work?


Be prepared for the long haul.

Remember those pop stars who only ever made one hit record? There are a few art quilters who made one spectacular piece and t hen moved onto some other art form…there are also many people who give up because their first few pieces aren’t very good….I think if you have the goal of becoming really good at anything you have to commit yourself to a significant period of time…having said that it is absolutely fine to quilt just for fun!! The same way as it is to learn to play the piano for fun, or learn a few phrases in French. But you won’t improve….

Bey feels that it is important to be able to communicate articulately about one’s work, and also to write a good artist statement. While I have read this advice in other places I would really like to see an example of a good statement versus a bad statement. I rarely get anything from reading other people’s statements – maybe that’s because they’re all bad!!! Probably it’s because I like to figure out things for myself…if I want to ask the artist anything, it’s usually technical rather than inspirational. And I find when I ask for questions myself, if I’m giving a presentation, most of them are technical – what type of dye d’you use – sort of thing – always a bit disappointing!! But that’s what people want to know.

Knowledge, solid knowledge is always important, no matter the field. I’ve always been disappointed with workshops I’ve taken that were really touchy-feely, airy-fairy and not informational. And the information needs to be relevant!! I remember one ghastly workshop where the instructor spent 3 hours every morning trying to explain obscure yoga practices to us!!! Other ones where we were given sort of kindergarten exercises to carry out – you know the sort of thing – you dip your hand in a box and what you pull out you make – blue triangles with bobble hats sort of thing…and a third workshop with a Big Name who handed out some multiply photocopied ancient art school exercises that were to take us the whole week!!! And he never critiqued the results! What a let down that was! always be suspicious if the printing on the handout is slightly diagonal to the paper!

I’m glad that Bey states that knowledge can be gained from either a good art program or from “your own obsessive seeking out of knowledge”. And he also states that if you do decide to have formal training that you have to be very careful where you choose to go – many programs are quite weak.


Don’t be afraid to create new paradigms for how you can exist and function as an artist.

I think many art quilters are really ahead of the game on this one – we’ve discovered that few galleries will accept us and have found other ways of showing and selling our work. People who buy my work are sometimes surprised at the cost ($200 per square foot; that’s about $1200 for a piece that is 24” x 36”) until I explain: 50% to the gallery, 33% (or thereabouts) to the Feds (though thank goodness I can at least now agree with the policies!! At least the policies as described in the campaign speeches!), 10-15% for supplies…. Which brings it down to less than $50 psf for me. Plus I might make many pieces that I can’t sell. I just sold my first watercolour painting! A friend said – “wow and so much easier than working at my job”. She was only counting the time it took me to do that one watercolour, but there had been 50 practice ones I couldn’t sell!!

All additional advice welcome!!! Plus all comments and any questions – I’d love to do a blog just answering questions one day, so go ahead!!

Posted by Elizabeth Barton at 1:25 PM

Do you think it's worthwhile to join SAQA?

Very thought provoking. I like that the ideas are delineated into "tasks" that you can reasonably measure yourself against, though all are inter-related. I do still have a few questions: In "Show your work to as many people as possible" do you have thoughts/ guidance as to what types of personal marketing you believe add value and/or work best for a textile artist? You mention handing out postcards of photos for feedback, but what about our cyberspace reality? Finally (for now), I think that somewhere in all this there needs to be a statement about being bold. It's tough to market oneself without the courage to thrust yourself and your work out there.

Jackie, I just recently started making art quilts and joined SAQA right away. And I would highly recommend it. I very much feel included in the community even though I've just started. SAQA is also an invaluable source for quilting art and business information of every kind.

My Gosh Elizabeth, what a useful blog. I love how your suggestions are concrete and practical. I will print them and put them on my inspiration wall for the times I get lazy about my art. That said, I was wondering - do you think a newbie should get a body of work before she starts marketing it? Also I know an artist should start a resume of pieces sold but I'm not sure what form that should take?