I usually work on more than one piece at once – today I counted up and realized I have 5 different pieces “in progress”!

There’s a small piece I’ve been completely stuck on for months and it just sits in a corner of the design wall – I‘m waiting for it to pull itself together and finish itself!! So far…not much has happened. 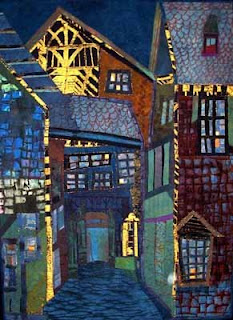 I have one piece that is finished except for whipping down the binding…but…I hate the colours and I’m contemplated just overdyeing the whole thing!! I did do this once before and it was magic – but mainly because I had had some gold pigment on the piece that didn’t stand out at all until I overdyed the quilt blue whereon the gold just “popped” as it didn’t accept the dye. (see the picture above). But the current piece doesn’t have any gold…though I could maybe brush a little on…hmmmmm

Then there’s the piece where I chose the wrong quilting pattern and “being in the mood” quilted away merrily listening to my favorite CD of the moment (“Morimur” (for the curious!)) and then realized the quilting was totally deadening the image. You have to be very careful with an all over pattern – it can pull a piece together but it can also blur it into a stew of clothy nothing! Since my arthritic fingers protest mightily at holding cloth tightly while I pick out stitches, I’ve had to enlist the aid of a friend for that disaster. 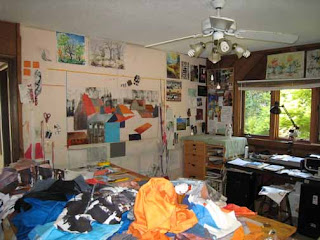 At this time of the year it’s just too hot in the afternoon to work in the upstairs studio (above), so I also have a complete set up (machine, design wall, cutting table –“ the full catastrophe” –) downstairs in the cool basement . 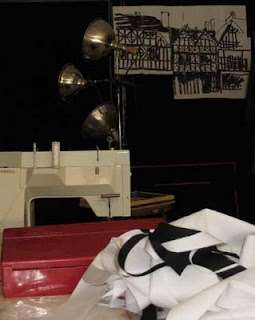 It’s interesting that the downstairs piece is bold and cool – the 12th in my black/white series based on half timbered buildings in my home land, . Upstairs I have a fairly delicate detailed piece with (surprise!) lots of orange roofs gradually being arranged on the design wall.

So – whatever I’m in the mood for – I’ve got something to work on!! Well…at least...I should have!