How d’you know when it’s good? 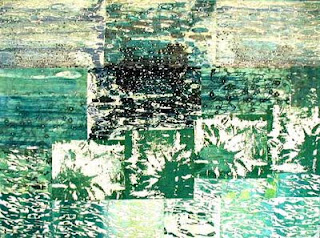 I love reading Dave Hickey’s opinion pieces in Art in ,which magazine by the way is one of the few that I take. If I have a “good year” with sales, I extend my subscription by several years – to get me through the lean ones.This month Hickey wrote about judging quality/value in art.Who could resist reading a column with this first sentence?

“no piece of art criticism written by me or anyone else contributed a whiff of pheromone to the fragrant panache that sustained the art world for nearly two decades as a market in luxury goods”!

Hickey is writing about the astonishing rise in art as a luxury product, a status product – now of course being dashed on the recession cliffs. He feels that, however, there were always a few voices holding out for quality, believing that it is possible to discern that some art is better than others though he bemoans the fact that those voices have not been clear enough or loud enough to make an impact.

I think the same thing has been true in the art quilt world. Though I would love to think of art quilts becoming a luxury must have decorator item, I don’t think it would actually lead to progress in the medium. There are some “art quilt” designers who sell to upmarket trendy stores like Takashimaya on . Take a look next time you’re in ! I find their work safe and bland, uneventful – not nearly as exciting even as the Emperor’s new birthday suit! Definitely priced as luxury goods, though.

However, who is to decide what is good work and what is not? There is some consensus about a dozen or so quiltmakers who are really at the top of their game – you know their names: Nancy Crow, Jan Myers-Newbury, Rachel Brumer, Dorothy Caldwell, Pauline Burbidge and several others, but what about the new folk coming alonge – where can we find strong innovative work? For one thing, As in the art world, there has been a tendency to go for the middle road, to opt for the “in” thing, or the politically correct thing. To choose work that is safe, that we’ve already decided is acceptable. Hence all the clones.

There is also a tendency towards equal opportunity that tends to dilute the overall effect. Quilt shows that ask for 3 entries but will only choose one piece per person – if Suzie’s 3 pieces are all stronger than Sam’s 3 and Lily’s 3 then why do we have one from each person? This is not showing us the best in quilts but giving everybody a chance. There was a book written many years ago by Thomas Kuhn called The Structure of Scientific Revolutions. It described how science was at the mercy of politics (well, we’ve seen that fairly recently too!) – perhaps progress in the quilt world (and in the art world in general) can be said to be a victim of the same problem. As Hickey says being fair, rather than being right.

The need for stronger critical writing in the art quilt world has been mentioned several times..it’s interesting that Hickey describes the same phenomenon in the art world in general!

And of course there’s a distinct advantage to (un)educating the public as to what is really worthwhile – you can definitely make and sell more!! In every arena. Quilting, Art, television (look at the rise of reality shows like Dancing with the Stars – why can’t we have expert gorgeous brilliant dancing instead of watching these folk stumble around with clever choreography trying to hide their mistakes – being judged on “personality” rather than skill?).

Hmm, I notice I’m getting off the subject a bit! What really fascinated me was that Hickey’s conclusion as to the best way to judge quality in art – something I’ve written about from the aspect of composition and content…was to focus on a more reactive approach.

Hang your quilt up, really look at it and ask yourself these bold, clear questions:

How memorable is will this piece? Both for me, and for others?

How often will I revisit it in memory?

What in particular will I most remember?

How does it compare to other work?

How does its presence improve the room?

How long will it stay fresh, interesting, even intriguing, if I look at it every day?

If I were to sell it, how much money would I want for it? Or, what would I trade it for?

How would I describe it in an essay?

When I ask others’ reaction, are they generally in agreement? (and not just being nice!)

How does it relate to the art quilt world in general?

What is the quilt about? And is that important? Is it relevant to others?

I would also add – at the end of the year (or when you have a dozen or so pieces)…it would be a good idea to hang them all up (if you can find somewhere to do it!) and survey them very critically as a whole. Pick out the ones that are still good and strong and memorable after a whole year, let the others go….

I think it’s also helpful to hang a piece for several weeks (at least) after it’s finished, to see if you actually want to look at it every time you walk into the room.

PS the quilt at the top is one of my few forever favorites.

Posted by Elizabeth Barton at 7:34 AM

I love this post!
Even I do most of this thinking. Though my quilts, or bears, are mostly for family and friends.

I really like this post - especially the concrete advice on how to judge your own work. Still, it brings up an issue that I find myself dealing with. Lately I have had to make a conscious choice to stop worrying about what people will think of my work. It really bogs down the whole creative process for me. I just need to create - to create. Basically I'm sure my body of work could be called - the Good - The Bad and the Ugly :) LOL!

It would be very interesting to see an exhibition, at a quilt show, where all the work had been selected by a panel of art critics who had no quilting experience or background, and at the same show have a panel of selectors from the art quilt world choose from the same entries and then see what would be included in both panels' choices. I wonder if any show organisers would be courageous enough to do this.
I would love to know how many private non-textile people buy art textiles/quilts.
You write that you would love to think of art quilts becoming a luxury must have decorator item;
as an artist working with textiles would you prefer to sell a piece of work to somebody who wants to buy it because you are a name and in vogue or to somebody who will buy it because the piece of work is something they really, really want and there is something in that piece that hits right home for that person?
Marianne

This is a really though provoking post. I recently finished two small wall quilts that I didn't particularly like but decided to hang them for a while anyway. Over the few months I have grown to like them more