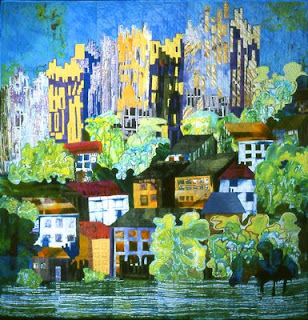 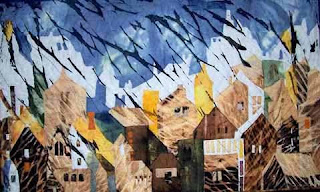 Gathering Storm
Quilt Shows
I was very intrigued by Marianne’s suggestion yesterday about a quilt show judged twice – once by a panel of quilters and once by a panel of art critics and experts who knew nothing of quiltmaking. what a fascinating idea! the show could be hung in three galleries – one for the pieces chosen only by the quilters, one for those picked by the critics and a third – where both had thought the work was strong. I don’t know why there is so much secrecy about the judging – more secrecy than the Supreme Court! I’ve heard that the 3 judges give “scores” – it would be so interesting to have the scores from each person in the catalogue.

Quilt National ’09 was juried by 2 quiltmakers and one art professor who has worked with quilters for years. Will this, therefore, be a very “quilty” Quilt national? Why do such juried shows play so safe by having mainly quilters on the judging panel? Are they afraid that non-quilters wouldn’t accept anything? Or maybe, there’s some kind of weird prejudice that a non-quilter couldn’t judge a quilt? Which would be fine if the aim was them to be only judged as a craft form. But I think most people who enter QN, AQE, Visions, Q=A=Q are wishing their work to be considered as art and judged in that vein.

I’ve heard it said that one reason is those who don’t know the art quilt world wouldn’t be able to pick out a copy or clone, which has some weight as there is a lot of cloning going on out there! Not that copying is bad or unexpected. It’s a time honoured way of learning a craft, but, of course, should not be entered into shows as original art. This problem could easily be addressed by a quilt expert looking over the choices after the works were chosen.

So – Quilt organizations!! Be Bold! You want quilts accepted into mainstream art? Then, choose more curators and fewer quilters as jurors!

The art quiltmaker, of course, can choose to enter all media art shows rather than quilt shows. The downside is that all media shows tend to be more local and the publicity within the quiltmaking world is pretty much insignificant, so if you’re entering shows to get “known” so that you’ll get lots of teaching engagements then all media shows would not benefit. But if your aim is to present your work as art and have it judged against other art, then those shows might be better. And which shows do I enter? I enter the big art quilts shows (above), though Visions has now got too expensive for me, and I enter wider “craft” based shows like Form not Function, and Craft Forms. I also enter several local all media art shows. Plus I look for opportunities for solo shows and have been lucky enough to have one nearly every year – my next one will be in the Campus Gate Gallery at Young Harris, GA in the Fall. (email me privately if you want to be put on my postcard list).

Quilt Sales
In her comment, Marianne asked:
"You write that you would love to think of art quilts becoming a luxury must have decorator item"
I wrote that while I would love for art quilts to become an item that everyone should have – like the flat tv that is desired by 50% of my household (!), I didn’t think that would necessarily make art quilts better art. I would love for it to happen because I think that the average person still will only think of a painting when they are looking for something to hang on their walls. Quilts, and all fiber work, have many advantages over paintings – for one thing if they fall down in the night, you don’t hear a crash of breaking glass and imagine burglars! (yes that has happened!). Also I think there is more to look at with the added dimension of texture and detail. Hickey was pointing out that it became fashionable in the 80s and 90s to have the work of an “in” painter on your walls – but that didn’t mean that the strongest work was chosen – by a long way. So it would be good for the quilt medium to have people understand that not only paintings can make a room a visual treat, but to increase demand wouldn’t increase quality. Sadly! Though maybe if art quilts were accepted into the formal art world, and more and more people with some knowledge of formal issues in art began to make quilts, that would lead to an improvement – maybe!! It would be exciting to watch – and I do think it’s beginning to happen.

Marianne also asked:
"as an artist working with textiles would you prefer to sell a piece of work to somebody who wants to buy it because you are a name and in vogue or to somebody who will buy it because the piece of work is something they really, really want and there is something in that piece that hits right home for that person?"
I have enough work for sale that both people could buy!! And I encourage them to do so!
Seriously, I sell some of my work through galleries, and some directly. It is always a bonus to know the person who is buying the piece and to hear from them how much it means to them. It’s lovely!

And, if you have been, thanks for reading...and
Thank you, Marianne, for raising interesting questions…
Elizabeth
PS the quilts at the top went to people who loved them for themselves - a good feeling!
Posted by Elizabeth Barton at 6:37 AM

Do you think they are judging on techniques such as stitch quality and difficulty, bindings, tension etc. some of which an art critic would not know what he should be looking for or the importance of it unless schooled first?

I think any good critic would definitely include craftsmanship into his judgment of a piece; I went round a show with a juror who was a photography curator and he rejected a metal sculpture because of the poor welding technique.
I think a difficult technique would only be appropriate if it was Necessary to the overall composition and meaning of the piece.

While reading the blog, I was thinking along the same lines as Barbara. I think "technique knowledge" is exactly the reason non quilters aren't chosen to judge art quilt shows. No matter what people say technique plays into a piece and there is a bias out there that thinks a non quilter could not tell good technique. I agree with with Elizabeth that this is untrue. I go for a the happy medium of both quilters and non quilters judging. I mean - everyone has an opinion of good art - if you're willing to put your work out there to be judge - then let it be judge by different eyes!

Can badly executed work ever be good art? I agree it would be necessary to make sure that whatever criteria was set for the exhibition was being met, but would uneven stitching disqualify a piece from being art if it had no impact on the over all design? No one has ever set a measurement for brush strokes. I think quilt art is the only art form that sets limitations such as 3 layers sewn together and lo and behold the middle one has to be batting/wadding otherwise it doesn't qualify; stitches has to be even lengths hence machines are now being made to rectify our feeble attempts to reach this goal.
I've noticed that quite a few people have started to mount their work on canvas, I wonder when that will start to appear at quilt shows.
You touch on cloned work being shown and a while back you also mentioned the fact that you can go to exhibitions and pick out work that shows that the maker has attended so and so's class. This problem can easily be addressed by entrants submitting their design work alongside the finished quilt. After all if an artist were to take on a commission, most organisations and private people would like to see some ideas on paper before committing to pay. I know that some exhibitions have more than a thousand entries so it would be a mammoth task, but coming to think of it, maybe this would reduce the number of entries? I am not saying this artwork should be made available to the public to view although it's always very fascinating and amazing to follow an artist's journey to the final piece.
It is intriguing to follow the development in the quilt world. A lot of what is happening now reminds me of the world of embroidery in the UK 15 years ago. A number of embroiderers moved into mixed media in order to be accepted into the art scene, a few stuck to fabric and thread embroideries and some drifted around either never to be heard of again or resurfaced in fashion or in the quilting world. It will be interesting to see how many of today's art quilters are around in 15 years from now.
I quite agree with you that it would be great if textile art became just another choice people looked at, when wanting to fill an empty space on the wall. As you say it has a great many advantages over glass covered wall hangings as well as an insulating property, just think why huge gobelins were used in centuries past. The best draught-excluding curtains we've ever had were a set of patchwork ones I made 8-9 years ago. They didn't drape very well though, LOL.
I am sure that textile art is more widespread in the US than here in Europe. There are a great many galleries where I live but I have never come across any showing textiles. There are certainly several annual exhibitions around Europe and many quilters and embroiderers travel to those. I'm not sure how many non-fabric fanatics go though. The current economic climate might very well put a temporary break on the development and the growth of those shows, so the evolution of the quilt art will see some years of stagnation. Maybe that will lead to a Darwinian future so only those who make strong art work survive and their work will be shown in galleries alongside art in other media.
Thank you for taking time to respond to my thoughts and my cheeky questions.