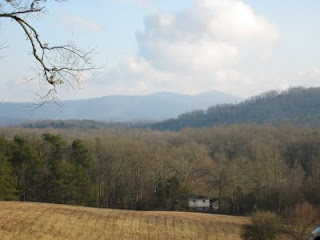 I started to think more about content when I was driving up and down to Blue Ridge, GA this weekend. The Smoky Mountains have very relaxed, you might say contented, lines and shapes in the landscape. Their colours are the soft smoky greens and blues and purples created by the moisture in the air. But I think it would be difficult to make interesting work from a scene that Nature has already made so beautiful, so calm so harmonious. The job of the artist is not to blandly portray something that Nature has already done – and undoubtedly a lot better! – but instead to reveal images, scenes, connections, discoveries etc that we might not have seen. Or, to show us awkward beauty, mystery and intrigue, passion or other strong emotion.

All beginning writers are told – introduce tension (or the equivalent thereof!) in the second act….the same in music – Remember the old formula for songs: AABA – (that’s not ABBA misspelled by the way!) – A is the main verse and tune, B is the contrast.
One of the problems I see in contemporary quilts is that the main idea or photograph that is the starting point is just a little too sweet and that, if followed literally, leads to work that is simpering and sugary. Even the Mona Lisa has that mysterious little smile that has puzzled the art critics for centuries!! Notice how in the reality shows, the producers try to whip up tension between the participants – and, I’m told, will sleep deprive them to make them irritable if they’re too relaxed and contented! Now I’m not suggesting that you pull a few all nighters with black coffee or IrnBru to get you nicely agitated! Rather that we all should Think through at least some of the Plot before we get started.

What is going to be different about this viewpoint? What have I discovered that others pass by? What mystery or intrigue can I give to this image. How can I bring some tension into this? Then, look critically through the latest catalogue from a quilt show …deciding which works are more sweetness and sentimentality, and which really pull your eyes in, which have something new to offer? Can you say –“I wonder if anyone else has ever noticed that?” about the scene to be depicted? What is different and special about this depiction of a small child picking flowers, or a dog romping in a field?

And it’s not just what you make a quilt about – it’s how you do it too. The same thing can be the subject of a piece, and yet have a very different meaning. So you could do a mountain scene with flowers in the foreground – and emphasize the sky and the rolling clouds. The clouds could be good rain bearing ones, or threatening ones. Or the scene could minimize the sky and emphasize the flowers – they could be non native flowers that had taken over the native ones, or they could be “weeds” like dandelions but portrayed so exquisitely that we think How Beautiful!! I’ll never get rid of a dandelion again!

And now…back to work!
If you have been, thanks for reading!
Elizabeth
Posted by Elizabeth Barton at 12:40 PM

If a 'weed' is a plant not intentionally sown, whose undesirable qualities outweigh its' good points, virtually any plant that is growing where we do not want it to grow is a weed. How far can we stretch this metaphor to fit the debate! Can't you tell I'm a botanist?!

stretched metaphors are just as much fun as mixed ones! stretch on!