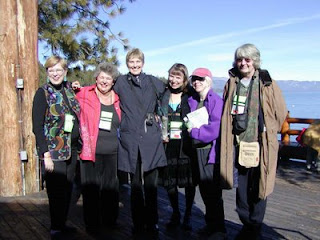 It’s a truism that people learn in different ways but however they do it, repetition and rehearsal are the key for anyone out of their twenties!! And probably long before that too.

For me, the best way to learn something has always been to read about it, make notes on the reading, then transcribe the notes, then teach it . That way some of it might stay in my head!

I started teaching quilt making because I wanted to learn how to do it. I knew that if I had to grasp the ideas, retain them and clarify them for others I would gain immense knowledge myself.

I had one 2 hour “lesson” in quilt making in 1984 –to which I had agreed because I wanted to meet some people (having just moved to a new town). I thought quilt making sounded dreary and pointless! But when I was asked to join a group of women from all over the world (, , , ) who needed a 5th to be able to afford a teacher, I didn’t hesitate!! We were to meet in each others’ houses and I thought what a wonderful way to get to know people. And it certainly proved to be very true with now 25 years of quiltmaking! After one lesson I was addicted, the poor teacher became sick (not as a result of my addiction I hasten to say!!) and went into hospital and I took over the group! (She recovered and we team taught for a while, then we had so many requests we just split them in two and went our separate ways).

One of the advantages of getting older is that you can pick and choose what you learn (as well as teach!). I soon realized that I was a lot more interested in the idea of making up your own patterns than teaching existing ones. Also, I was never very good at getting things exactly precise or in following rules. So, I gradually veered into art quilts and then realized that to get anywhere with art quilts you definitely need an “art education” (whether formal or informal).

Of course, I had already had a lot of “formal” education! And was very critical of the way things had often been taught. If there was one thing I saw as a difference between education in the USA and in the UK (I went to university in both countries), it was the emphasis on classifications in the USA. To some extent this was good as in the I absorbed lots of bits of vague knowledge about this and that without really knowing how it all fitted together – but I did have lots of pieces of information whose significance I understood. In the US, most of the books and lectures emphasized classification and labelling above understanding what it actually was that we were labeling and classifying. All ideas and no sorting system seemed slightly more interesting than the reverse!! Like the difference between a pile of mail for 20 different people, and 20 letter boxes clearly labeled but no mail! But to have both is obviously the best.

It’s very helpful when learning something new to have the structure laid out roughly…. I don’t need interminable details about who devised it, different types of structure, when it was made etc etc. A few years ago education seemed to focus on that, then art education suddenly became without any structure at all! Neither approach would help me learn. So it was very freeing to be encouraged by one of the art profs at the local U to be an Observer rather than a participant. I watched and experimented and read and experimented more...better for me than having to rote learn all the details of history so I could pass a test…. As well as classroom observation, I started going to as many art museums and art shows as I could and read everything comprehensible (!) about art.

I’ve read a lot of books on “the theory of art”, and composition in landscape painting and so on (see list at end) but I think what was the most helpful was the listing of the basic structures in Edgar Whitney’s classic book “Complete Guide to Watercolor Painting”. So many books just give a jumble of things that you have to remember e.g. they’ll say the following are important: value, balance and lost and found edges. Well, yes, they are all important but it’s like saying socks, bananas and steering wheels are helpful and useful! You find each in different ways, use them at different times, in different places. Edgar Whitney clearly lays out that there are a limited number of elements in art (shape, line, value etc) – the building blocks which we can arrange on a 2 dimensional plane (which quilts really are even though you sometimes have to indicate depth when filling out a form – which always seems so weird: 40 x 60 x 1/10th!!). When we have an arrangement of those elements we can then judge whether the arrangement is interesting, communicative, boring, enticing, emotive etc by examining it according to various principles (unity, tension, balance etc). From this basis I was able to come up with a simple series of steps (a true pedagogue!) that the artist goes through beginning with the Main Idea (Twyla Tharp) to the final standing back and ...thinking "and now for the next one!"

Teaching the basics like this and “playing the scales” every day myself helps me to learn and practice what I preach!

And, if you have been, thanks for reading!!!

And don’t read just blogs!! Go to your public library and get out all the art books you can!

I’d love comments on books that you’ve found to be really enlightening.

Here’s my book list in random order as found lying around the house!

(plus look at every art picture book you can!)

Kirk Varnedoe: A fine Disregard, and Pictures of Nothing

Charles Reid: any of his eleven books on painting

Art in a monthly magazine.

Posted by Elizabeth Barton at 7:41 AM

Thank you so much for the list of books-it is much appreciated. Incidentally, I often learn by doing which can mean following an example. Underneath this "learning by doing' however is having read about what I am going to do. I need to be able to grasp the task in a series of steps and what I call a mental construct before I can actually do it. Funny what you learn about yourself as you get older.