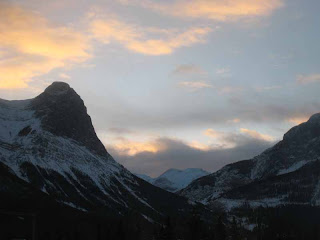 The above picture was taken last January in Canmore, Alberta where it got down to minus 40!! Brr..it's not quite that cold here but it feels like it!! An icy spectacular beauty.

So I've been engaged indoors...and while tidying up my Word files (at least better than tidying a real cupboard!), I came across my notes from a talk I heard about art quilts a few years ago given by a critic who writes for one of the major American art magazines. Her views on the place of art quilts (or rather lack of place!) in the mainstream art world were very interesting and I thought I'd summarise them here.

She stated that it was difficult to review art quilts in the general art context rather than the fiber art context and that many museums and galleries would tend do the latter only. Working in such a recognizable format as a quilt made it very likely that the work would be judged in that context – even more so if it was called “a quilt”. This would not be a bad thing or a good thing necessarily but would set a context for how the gallery owner, the viewer or the curator would judge the piece.

Surveying the art quilt world she felt that embellishment and the pleasures to be derived therefrom were apparently a primary concern in the quiltmaking world - lots of work that said very little. While this is a valid reason to make work, it is not currently fashionable in the contemporary art world. Contemporary art is particularly interested in taking people by surprise, looking at things in a different way, turning things upside down. This may be to convey a significant social theme, or it could be just for the fun of being transgressive! This is the current style, not a forever theme.

It is accepted that art can be made from anything (Julia Pfaff was on her way to a museum where she had a commission to do an installation and happened to see an uprooted tree…in a flash of inspiration! She installed the tree trunk and all the roots in the gallery)…so art could be made from fiber, or roots or trash just as easily as from paint and canvas. However, what the “art world” is interested in is that the work be provocative, assertive and startling - whatever it's made from. Thus, Ghada Amer’s embroideries are accepted into high fine art…not because they are embroideries, but because of the content of the embroideries – the social themes of war and injustice that she addresses.

One of the problems with art quilts being accepted and judged within the general art world is that the amount of work it takes to make a piece is seen in the art world as acceptable not in its own right, but only if it’s obsessive to the point of being excessive….for example: Polly Apfelbaum’s floor pieces made from thousands of pieces of velvet, stained or dyed and then cut out in flower and petal shapes. Here’s a You tube video of such a piece being installed.

The art world is concerned not with craftsmanship but with repetition. 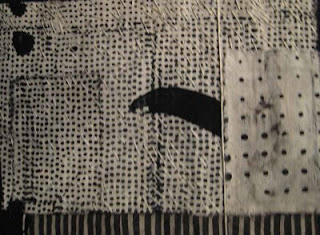 Dorothy Caldwell's work (above) shows the obsessive repetitive stitches that are so intriguing to both the quilt and the larger art world.

Another issue with quilts is that many are mainly decorative in nature – in the art world this is not an edgy issue!! A comment on decoration is new and interesting, plain old decoration is just – well – decoration! This is not to say that anything is Wrong with making decorative and beautiful work – just that it won’t be seen as having any place in the leading edge of art work today.

A third issue is subject. Fashions come and go – sometimes abstract is in, sometimes it’s out! Currently the art world is more interested in figurative work. Therefore quilts that refer to traditional patterns, or are more abstract in nature would be less likely to be of interest – currently.

Fourthly, while the use of fiber is acceptable, it’s not new and startling if the fiber is used in a traditional way. Textiles are not good (to the fine art world) if they fit the expectation of textiles. Furthermore, the fact that the work has been executed in fabric rather than in some other medium is not of interest. While, the medium has to make sense in the meaning of the work, it should not be the justification of the artwork. (Despite the fact that painters can get away with making paintings about painting!)

In the next blog - this is getting too long - I'll talk about my reaction to what this critic said - please add your comments and I can address them!

Posted by Elizabeth Barton at 1:51 PM

.."the fact that the work has been executed in fabric rather than in some other medium is not of interest." What interesting ideas you write about. I think this is certainly a valid point. There must be a concept, an idea, some point to the work. It isn't about the fabric. The fabric is a constraint that I myself selected and choose to work with. Whether I chose to recreate a landscape or a building or an abstract design in fabric, the point of the work is something beyond the fabric. It needs to touch the viewer, to speak, to move. One of my quilts, representing fall in Nova Scotia, received just the desired response from a viewer--"That's just what it felt like being there." It wasn't a photograph, the colors were not realistic but something of the sensation remained. That quilt has never won a prize but it touched someone in the way I hoped. This is prattling on a bit, hope it is somewhat coherent.

I'm looking forward to hearing your response to the critic (I'd like to know who she is...I definitely agree with her assessment of the "art" world versus the "fiber art" world).
And I especially appreciate her emphasis on current "fads" or what is currently acceptable in the art world as not being the final word of what is art.