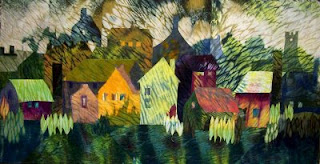 Inveigling a complete outsider to come and critique your work as a group is risky but can be very enlightening! Everyone has to take a chance that their quilt will be the piece that is totally condemned by the Expert, or even worse – completely overlooked.

Egos shouldn’t come into this at all…we are all learning and the way to improve is not by continuing to make the same old mistakes. The critic is not criticizing you, but your work.

Not everyone can manage this separation of course: if a person is very sensitive or defensive, they’re not at a point where criticism of their work can be helpful. The critic in that situation would do best to be reassuring; the artist would do well to listen carefully to the criticisms of other people’s work rather than focus on themselves.

There are many benefits to listening to somebody with a good eye (or even two!) and a clear mind, who is both articulate and knowledgeable, speak about the work. It helps you to see things about your own pieces to which you might be completely blind – when we look at our own work we see not only the actuality but also the hopes, the plans and the associations. Some elements may appear larger and more important – because they have a special meaning for us. Other aspects we may have become so habituated to that we no longer see them at all. Furthermore, critiques are one situation where vicarious learning may be stronger: you can see another’s work (necessarily) more objectively than they can. To compare your objectivity to that of the critic can help you validate or sharpen your own ability to really see the strengths and weaknesses of a piece.

A critic that totally praises and gushes over every piece is not earning their money; neither is the one who merely describes the piece in front of them, nor one who just questions the maker as to what they meant by the work – though this can be a great starting point. The helpful critic will point out the good and the bad – will explain why the good is good and the bad is bad, and give you several ideas to try that might strengthen the existing piece, or later works. They should also help you to see where your work fits both into your own body of work and into the art world in general.

Here are some excerpts from a critique I took part in some time ago in which I think the critic made some very interesting and telling points. (the comments relate to many different pieces, only one of which was mine.)

• The method you’ve used (fracturing an image) is something of a cliché – there’s nothing interesting and unexpected about it.

• This quilt exemplifies the danger that it’s easy to be pleasing, but very hard to be imaginative and inventive.

• A souvenir of a known view, or image can be lovely – but ordinary.

• Pieces are better that are based on, but do not exactly depict, reality.

• Images are more electric and interesting when they disorient, or disjoint.

• Avoid being too charming, in being disneyesque, too soothing or ingratiating.

• Allow some edge to come through.

• If the fabric is too beautiful, you might be in danger of creating mere eyecandy.

• Work is more exciting where there are dissolves (i.e. not all hard edges, but some lost ones too)

• I see no emotion in this piece.

• Jokiness can be a cop out from making a declarative statement.

• It’s interesting when you cannot exactly tell what an image is but if a piece is too fragmented, too broken up, then one tends to lose interest and wander off.

• If you’re using a mix of two very different mediums then there should be a justification for that.

• Extra stuff – like dangling strings, or uneven outlines, or things added on also needs to be justified.

• The urge to grid (the quilt aesthetic) can be a constraint – be careful.

• An opposition of interest between a distant and a close up view is good, intriguing.

• A lack of contrast is very passive and can be exceeding boring.

• A strong pattern of shapes that have feeling rather than specificity is powerful. Indefinite masses that interact with one another can provoke various associations and makes us work to understand the piece.

• Beware of gimmicks or conceits – e.g. borrowing from obvious sources and adding or reforming in some modern concept e.g. famous paintings in Dayglo colours – at best decorative, at worst diminishes.

• Pleasantness is a serious issue in many quilts….it would be important to push hard to make something no one as ever seen before.

It’s a long journey to become brilliant at something, but one step can lead to improvement.

Posted by Elizabeth Barton at 5:29 AM

And it (April Rains) will soon be off to it's new home!

Yes indeed!! and it sounds like it's going to a very good home!

That is especially helpful information, neatly condensed and very understandable. I appreciate that you took the time to post that-thank you again as it has prompted some thinking.

Ah, Elizabeth, thank you for this post - it is bound to hit home with all of us in at least one way. Thought-provoking and refreshing.