Using photographs as a starting point 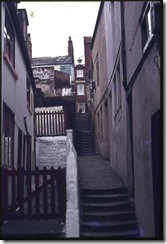 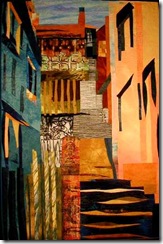 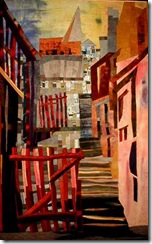 I’ve had the impression from some folk that there is a little snobbery about using photographs as a beginning point for an art quilt. Work that comes out of oneself (rather than a photo) is considered somehow purer…hmm well ..there are several responses one could make to that!! (but better not in a public forum!). However, I think the reason that starting with a photo is so looked down upon is because people often do a very bad job of it . They follow the photograph too closely (warts and all) and end up with an overly literal piece that shows the warts very well and not much else. This kind of work often looks exceeding stiff and lifeless. But I don’t think that work that comes from a photo HAS to look that way, and it seems to me it’s just as good an inspiration as any. Wherever you begin, you’re unlikely to come up with the perfect idea or image at the first try. There’s always considerable orchestration, presentation, refining and distilling needed to be able to gain even some semblance of that golden idea floating in your head. Have you got golden ideas floating in your head? I know I have in mine!! Oh! would that I could realize them!

Here are some points I’ve found helpful when starting from a photograph?

1. The best photographs of course are those that you take yourself because you were inspired by a particular scene; there was something about it that made you want to keep a memory of it. If you can, write that down when you take the photo! Even if you don’t use the photo to make a quilt, it will add to your pleasure of the photo itself to read your notes. And if you do make a quilt design, then you can look at your notes and compensate for the distortions that the camera makes, or thing things that it misses: the atmosphere or brightness that you observed but couldn’t quite capture in pixels. So often I find that what entranced me was the light, especially when it suggests some magic place ahead. A sunny corner (or in the South – a shady corner!), a clean fresh meadow full of flowers. The small flowers may not show up on your camera, but if you have your written note, when you make the quilt, you can sprinkle flowers in there, to be observed when people come up close to the work. Just like you might see the meadow from a distance and then, as you come to sit in it, you appreciate all those small wonders.

When you’re looking at the inspiration photo preparatory to sketching out some possible designs, think first what it was that attracted you. Then think “how can I bring this out in my art quilt version of this picture?”. If it was the freshness of the spring day…then it’s unlikely that your photo has captured the freshness very well…but it will have the main shapes and values of the scene and it’s up to you to figure out how to use color or value pattern or texture to indicate that freshness. Think: What colour is fresh? What texture is fresh?

2. The camera photographs everything, it is omnivorous! No discrimination at all!! But you are not…so the next step looking at the photo is “what can I leave out?” And basically that’s anything that doesn’t set the scene or contribute to your feelings about the image and what you want to communicate about it.

Leave out all the extraneous “stuff”. You can always put some back if you need it for balance later on.

3. Next, I like to assess the photo and see if there’s anything that might be better rearranged. You know how you just want to move things around a little on a dining table, or in a bunch of flowers, or the furniture in a room. As a teenager I drove my poor parents wild because I was always seeking the “perfect” arrangement of furniture in my room – with lots of crashing and banging and dings and dents!! It’s a lot easier in a photograph! You can make a photocopy and cut out the relevant bits you want to move, or simply sketch them.

4. Having left out unnecessary stuff and rearranged what’s left, check the value pattern. Just because the actual place happened to have lights and darks in various places, it doesn’t mean you have to have them that way. Nor d’you have to have the direction of light as it actually was. You can choose your direction (or directions – even Rembrandt often had multiple directions of light) purely by what you most want to illuminate.

Also it’s important to remember that a camera tends to overaccentuate the lights and darks – especially the darks, rendering them as a heavy black when in reality they might have been a rich mixture of deep values of several colours.

5. Now for the colour – what are the important colours to include in this piece to best demonstrate your feelings? You might have photographed the scene because it spoke to you of a fresh spring morning, but maybe that was the result of the cool air, the faint scent of blossoms and the warmth of the spring sun on your face. Sadly, the photograph won’t include those, BUT you can bring them out by altering the colours. What colour is cool air? What colour is the warmth of the sun? What color is the smell of flowers? Yes !! you know! You’re thinking of it already!! So add those in…but then check to make sure that you don’t have too many colours, the piece will be stronger if your colours are harmonized. And talking of harmony, it’s good to have harmonized shapes and lines too – even if they don’t occur in the photo.

When you have used a few existing photographs as a starting point for a quilt and made some of the changes described above, it becomes easier to “compose” the photograph as you are actually taking it. I think “fresh” photos are best (like eggs!) because then you can remember your impressions of the scene and why you were photographing it more easily.

Some people think that “copying a photograph” is cheating because it doesn’t involve any input on the part of the artist….but I guess they’ve not read the above suggestions!!! Input is all..the photo is where you start, not where you end up. So please, just smile gently at those who would look down on you as you look through your photographs to see where to begin…you know how much you’re going to add. It’s not the method, or the process or the subject that is important, but how genuine and unique the expression is.

Posted by Elizabeth Barton at 7:05 AM

You speak of using photos not slavishly copying them. The photos inspire and remind and beg editing.

There is another quilt blog I sometimes follow and see photos slavishly copied into quilts. Why not just take the pic and post it! The same artist tends to copy others' projects and present them so copying carries over to other aspects.

As you know, I have a long history in the world of watercolor painting. What you are saying is exactly what Zoltan said over and over. The photo is a jumping off point that opens the door to your own interpretation and creativity and to remembering an experience time and place.

I find in the painting arena now that plein air artists tend to look down on those who use photos. There simply is no one answer here. Photographs are a tool like any other.

You are as always wonderfully articulate and helpful!

Elizabeth, you are amazing! You always strip away the dross and get to the gold. I had always thought of the photo as the "true" image and tried to copy it, wondering why my pieces lacked heart. Now I know why--duh--wish I had figured that out for myself--but I am so grateful for your insight. You keep writing and I'll keep reading!

Willa, I do plein air almost exclusively when I paint, but I always take reference photos -- and I often use them back home. Purists shudder -- perhaps I shouldn't say I do plein air at all, since I have no hesitation to rework at home.

In quilting art, it seems like Elizabeth's advice is triply useful -- essential, in fact. There you aren't using paint to reproduce (which can be deadly enough), but rather fabric, which is twice removed from reality. So using the fabric to make anew, or a new vision, is the only thing that makes sense.

As you said, if all you are doing is copying, why not just post the photo -- photographers use the camera to do what the camera does best, but artists in other media do, necessarily, something else.

I too have noticed this 'snobbery' and your suggestions are spot on.
Happy New Year!

I am one who has hesitated, in the past, to use photos feeling the photos has the info. I am now in a class at my local art center and they all start from photos, usually slavishly copying.

I am now using bigger shapes to bring the feel of the moment in, with color and light , to show what I wish to show in my sailboat quilts.
I n longer feel it is cheating but helping me with composition.

I simplify greatly hoping my spirit comes through.

some of my very first art quilts were from photos, and i remember being advised to "never let anyone see the original photo." i guess that was part of the snobbery?
now, with blogs being so much about process, i actually love seeing how work has been interpretted from source material.
thanks for sharing your ideas on bringing your soul to the scene. you go places in your color palettes that spark fantasy and imagination. love it.

Thanks for this advice. I LOVE using photos as a jumping off place for my quilts and these suggestions will help greatly!!!

I learn so much from your blog! Now the trick is to learn to take good photos. That takes practice as well. But what you say about instinct in taking a shot may help me get better. In our design class, we're learning by copying the masters. Cezanne knows how to balance asymmetry better than I can!

Thank you for all the fantastic ideas you offer on your blog. It is a wonderful learning tool.

I often use photos for information/idea gathering and reference but would not be interested in reproducing them in fabric - what would the point be there? If I take an excellent photo, I am thrilled to let it stand on its own.