Dealing with the leftovers!

So what does one do with the leftovers?    An old saw in composition textbooks,  whether applied to wall hangings or garden landscaping is to have odd numbers and various sizes of things: e.g. in values: at least three, with a large amount of one, a medium amount of another and a small amount of a third.  We have (rather scraggly as they don’t like the droughts we suffer from in the SE USA) a little papa/mama/baby family of cypresses either side of our driveway!  But I hadn’t planned on it extending to my quilts!  though this seems to have occurred when I was looking the other way (probably at the online scrabble to which I’m addicted!).

Years ago I made a little collage out of magazine advertisements; it was an exercise in an art class at the U:

I can certainly see why people like fusing because it’s so quick and easy to glue and stick!! at least with paper cut out from advertisements.  anyway this little collage has kicked around the study (yes I’m definitely not on the “best dressed studio list”! we never even got around to calling it more than a study!) for several years now and finally I decided it was time to make a quilt from it. 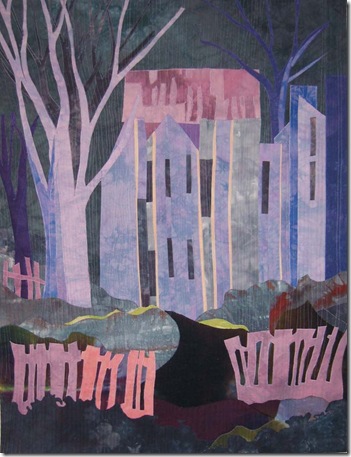 Of course it came out quite a bit differently as my quilts are wont to do.  The tree looked a bit clunky, the pale pink building in the back ground with the cut out (which probably occurred because I was cutting away some advertising wordage) looked very odd, and the foreground seemed too deep, the right hand didn’t appear to be related at all etc etc .  Plus, I was looking at a painting by a friend and thinking how much I loved the colours in the painting and was following that for my colour scheme.   I wanted a nice spooky feeling despite the lavender – I like the strange contrast of a colour associated with little old ladies and the gothicky hallowe’en feel to the house.  And that determined the title: Lavender Gothic. It’s about 35 by 45, stupidly I didn’t measure it before rolling it up in the quilt store aka the guest bedroom which is now tidied for guests, so they don’t have to sleep under 45 quilts!

But no sooner had Papa LG been made then I started looking at the left over bits and thinking about what could be done with them  Generally I feel the leftovers are often tastier than the original dish but I’m not sure about this one..I think I might have added a little too much sugar to poor Mama LG (Storm Dance – well the trees seemed to take over!): 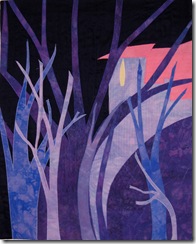 She is smaller: only 18 by 22.  At first I was going to balance that blast of pink with some pink verticals at the bottom left, but then I felt that the trees engaged in their own little dance had enough zest, movement and weight to compensate for the pink.  But they could still be added…so let me know!! 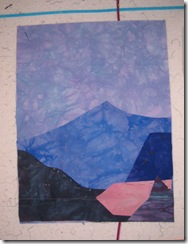 And I still have bits left over!   so I’ve pinned up this little fellow (13 x 17), not quite sure whether to finish him or not…the baby of the bunch.  Again comments invited…anything else left over though is straight into the compost!

Hope you all enjoy this season celebrating the winter (or summer!) solstice; I know I will if I can just get that darned Christmas cake made!!

If you have been, thanks for reading!  Elizabeth
PS don’t forget to check out the tabs at the top of the post!

Posted by Elizabeth Barton at 7:33 AM

I like both Mama and Papa LG. Papa is definitely an improvement over the sketch - as you say the tree was pretty clunky but now looks quite elegant.
Mama LG immediately brought the poem The Listeners by Walter de la Mare to mind. It was one of the first poems I ever learnt by heart in primary school and is still a favourite of mine. Isn't it interesting how images can conjure up words and memories?
As for baby - I have to say it does nothing for me. Imho you either need to do a lot more to make it interesting or abandon it. I find the pink in it rather jarring - it doesn't fit seamlessly into the images as with the other two.

Oh, I like these, particularly Mama. But I love taking the leftovers and making a nice stewy melange. I think the process adds to the depth and interest of the original. Great for exhibits. But then, I'm a sucker for context, and here the context enriches the original textile.

Fun to read, as usual. Yes, I think Baby needs something more--maybe some trees or a house, some uprights...? It looks like a setting, waiting for the actors to begin.

love the flavor and the feel. sometimes when switching from the study to the cloth, the piece starts to become too important (because of the effort & finality?), and it loses some of the playful intentions. i love the looseness of the study... i'd try to find that again in baby.
Actually, what if baby were twins? seems to me that halloweeny and gothic both could point to tall and spindly instead of fat and close to the ground.
just ideas.
love that you share and ask for them!

PS I'd like to comment on your store too. Do you still have these quilts in your study/studio?
If you could get higher resolution photos that showed the complete piece (including binding), I think that would be a plus for a potential buyer browsing the gallery.
I saw one of your quilts in person - I think @ a SAQA show in Grants Pass, OR - and it was STUNNING.
It's tough to recapture that vibe online, but bigger photos would be a great start. People say this to me all the time, so what the heck, I'll say it to you. ;)
I'm taking it to heart... new camera, taking a class, brought all my work back to the studio to photograph during all the "extra time" i'm supposed to have at the end of the year.

Hi cyn, thanks for the suggestion!! I never thought of it but it makes a lot of sense - will improve right away! or maybe tomorrow...
thanks!! Elizabeth

Okay, here we go, I'll throw in my two cents' worth. I enjoy the design of Papa very much but would like more variety of values in the house. Regarding Mama (accent on the second syllable, of course) I agree with your notion for a little pink on the left to balance the larger pink area, perhaps skinny lines of it along the trunk and branches like sunlight. Regarding Baby, I appreciate the sense of open-ness and anticipation. It does feel preliminary, unfinished. But do continue with it and please maintain that wide open feeling and blend that pink in. So there, I've said what I thought for right now with only brief glimpses of the pieces. I often change my mind and modulate pieces as I live with them more. but thank you for asking, it's a good exercise to critique a bit. Best wishes for a joyous Christmas and a Happy New Year to you and all your readers! Thank you for posting.

I love the two larger pieces. I know Baby isn't finished yet, but as it is now the subject matter doesn't seem to relate to the other two.

Cyn's comment about tall and spindly made me turn the picture sideways in my mind. If give it a quarter turn clockwise, the pink shape becomes a tower under a dark overhanging cliff.

I love the middle piece. I think it is perfect----the splash of pink adds a surprise among the stormy trees. Baby bear definitely needs a lot more, and perhaps some other colors