Inter and Intra inertia humps – a problem you didn’t realise you had! 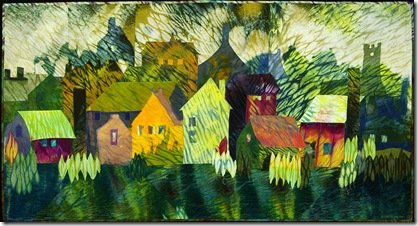 April Rains
Some of you may be wondering (and others may not give a damn!) why I’ve been blogging less lately. Well of course there are a lot of reasons, but the main one is because I’ve been writing a lot of material for a course at the online quilting classes at “Quilt University” and I find that I can only spend so much time per day sitting at the computer writing!! Plus there are only so many cogitations within my bonce upon which  I can pontificate!  I’ve been teaching an actual workshop called Working in a Series for a while now, and will be teaching it again at the Hudson River Valley fiberart workshops next May (looking forward to that, it’s a great venue!)  and that’s what I’ve been putting into an online course.   While taking an actual workshop is so much better of course, not everyone can manage that for reasons of distance, time and finance and it has been a very interesting process trying to put some of my workshop ideas into a virtual setting. 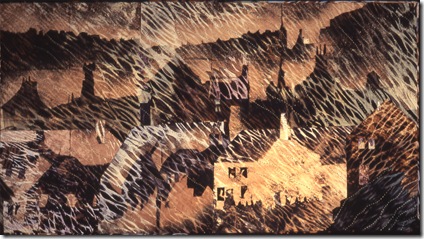 St Ives
I developed the idea of Working in a Series out of my own studio practice.  Like so many quilters, I love a novel challenge and tended to try one of this and one of that and not be able to wait till a new idea came along that I could have a go at!  But then when I looked at my work as a whole, it looked like a real mish mash and it didn’t seem as if I’d gone deep into anything.  Furthermore, since I generally had lots of ideas about something I would try to get them all into one piece!  With the resulting Gothic, spanish style ranch house with turrets and a picket fence to say nothing of the Victorian garage of a quilt!  I think also that Working in a Series helps you to get over the inertia hump between pieces that inevitably occurs. 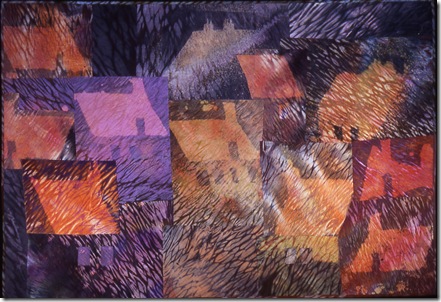 Semmerwater
I’ve discovered in fact there are two humps!  This is a dromedary of a problem rather than a camel!  Intrahumps and interhumps. The first  type of  inertia humps or stalling points is  within pieces and the second is between pieces.   Intra inertia is where it is very difficult for you to stay focussed on a piece as you are working on it.  Sure when we’re at the exciting stages of creation it’s easy for that interest to keep us moving,  like choosing the fabric!!  Flinging out great bouquets of glorious color across the floor!  But we all know (though for some reason I see few people admitting to it!  can it really just be me?) that there are long tedious passages, where you are working your way through what seem like endless value studies, or having sewn the piece together then facing the quilting – up and down, up and down, shoulders aching, thread breaking, bobbin running out of thread at crucial places and so on.  What I have found works best for me to overcome these kinds of humps is straight out of my background in behavioural change.  One can reward (and thus increase the rate of) a less attractive behaviour by following (note not preceding!)  it with short periods of a more attractive behaviour.  So when I’m engaged in a tedious task I do it for just as long as I can then when I start to flag, I have a little behavioural reward.  Now this could be any behaviour that seemed to be wanting to entice me away from the sewing machine!!  top of the list at present is online Scrabble!!  Thankfully I have a friend who indulges me in 4 simultaneous games!  So 15 minutes of sewing (maybe even just 10 on a bad day, or 30 on a good one!) is rewarded with a few Scrabble moves.  But my reward could be with a cup of tea, or even 5 minutes of house work.  Housework is usually very low on the list of attractive activities, but you know when you are ploughing away through something truly temper trying and tedious how suddenly dirty lavatories look very enticing!! 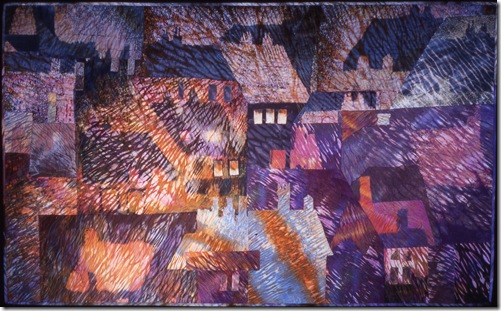 Rainy, Rainy Night
Inter inertia is that which occurs between pieces.  Now I deal with this in a number of different ways.  For one thing I’ve discovered it’s much better for me emotionally, mentally and physically if I work on several pieces at once: one in the planning and design stage, another that is being blocked out on the design wall, a third under the sewing machine being stitched together, quilted and finished, and a fourth that is having some handstitching incorporated into it.  Plus I usually have several earlier pieces in some stage of de- and re-construction. If I really hate them, they’re in the thrift store pile.  If there are good bits, they’re been identified and rescued from the morasse! 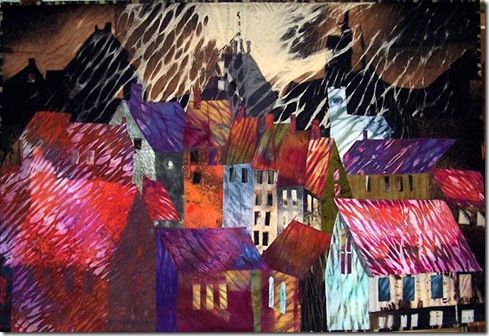 Hostler’s Row
The second thing that really helps me over my interpiece inertia is working in a series.  I have found it is so much more exciting to plan, imagine, think about a whole series of quilts on a topic that is engaging to me, than it is to put all my hopes onto a single piece.  I always liked whole novels rather than short stories, and in fact when I was a kid I usually chose books from the library based on the number of pages rather than anything else!    Well yes, now I’m a bit more discerning, but I’m sure that’s where it all began!   In Working in a Series, you don’t necessarily need to know everything you’re going to do up front, but you definitely have an overall plan, a backbone of an idea.  And that plot will carry you through chapter after chapter…what will happen next? What aspect of this idea (whether it be the drowned cities or the industrial landscapes, or simply the colour red) can I work on next?!!  I’m not good without direction, but I’ve found that it’s perfectly possible for me to give myself that direction with the idea of being a serial quilter.  And with that dreadful pun (oh how delicious they are!) I will quit for today.  If you have been, thanks for reading! Elizabeth 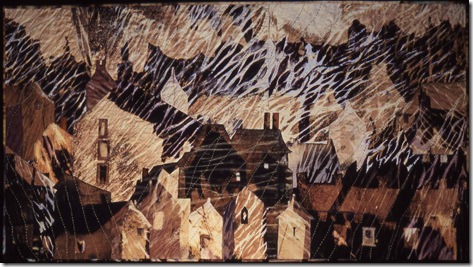 The Arrogance of Calm
PS I’ve included some images from my Drowned city series: the idea of cities being drowned is a very old one.  There are mentions in the OT  of all cities being under water, there are old myths from Celtic countries about the gods being so pissed off with man’s disregard for nature that they flooded the valleys and drown the whole town.  And there’s also the magical idea of cities under water: Atlantis , of course, and writers who build their plots on old mythical ideas like J.K. Rowling have also used these themes. I leave it up to you to decide whether my pieces are about the negative aspects of drowned cities, the positive ones, or both!!
All comments gratefully accepted!!  Plus a firm resolution of amendment, I will try to do better with  responses to queries within comments!
Posted by Elizabeth Barton at 8:23 AM

You have identified another step in the quilt designing process. Since I'm the in the middle of a design class, I am ruled by the deadline of the next meeting. Do you think that deadlines assist the quilter when doing series work?

Nicely said and very useful. I find it more than important to at least have something on the horizon as an idea when I'm finishing something. It may turn out not to be the next thing to happen, but at least it doesn't leave this empty dead space in the process-flow.

Taking notes on thoughts, planning decisions, progress etc is useful to me too. I find it brings me back to my moleskine to review ideas, make more notes - sort of keep all the balls in the air and recently handled.

Sorting/refolding/Stacking fabric can do the same thing. I call this - getting back in touch with the stash LOL. kind of gets things back under control and can trigger some interesting ideas.

LOL! Your comment on not liking short stories and wanting the book with the most pages, sounds just like me. If I'm in a hurry at the library, I'll still pick a longer book over a shorter one. If I have a bit of tedious sewing to do, I'll set it up on the machine and do 15 minutes before going off to work, 15 minutes after dinner etc. and get it done in those chunks of time without having to sit down for hours at a time and get discouraged.

I did laugh at your attraction to "dirty lavatories" when in the middle of a inter-block. Mine is mopping floors, something I detest, so I just have to decide which I detest more -- getting on with the art or mopping.

I like to think of my series as, perhaps, a group of short stories (although with panoramas and "sets" I seem to be working up to a novel.) In any case, it's context, context, context that keeps me going -- a bit like brainstorming -- in what context does this outlier seem to fit.

As for responding to comments, no need. Your thoughtful posts are so much fun (I like thinking) that they are reward enough. I only wish I had the same ability to work my thoughts into a series like your blog posts.

I laughed at your comment about trying to fit everything into one quilts. I find I have that same issue.

Even when I am working in a series quilt #1 seldom comes to fruition. It is still the one with too many focal points, decorative additions and huge color spectrum. I end up scavaging bits and pieces from it to complete the rest of the series. It is my information dump, the rest of the series will focus on one idea strand at a time.

And I find myself working frantically on multiple quilts in the series, trying to pin down the major direction and pieces before the muse wings off into another direction.