When I was a girl at a convent school being either fresh or loose was not considered a good thing!  but in art terms those are great qualities!  I’ve been reading about the last years of Matisse.  It’s so encouraging that there are so many examples of artists (in many media) producing wonderful work in their 70s and 80s.  No longer is commercial success a consideration.   At this time, a lifetime’s experience plus, strangely,  physical disability (e.g.having to paint with the brush attached to a long pole) leads the artist to produce work that is reduced to its essence.  It is both pared down and executed with the flair and panache and simplicity of the child but with the judgment, sensitivity and knowledge of a lifetime. 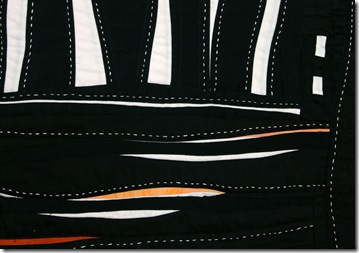 I’ve never had the chance to jury anything major (a couple of minor experiences which were very interesting..e.g. reviewing bodies of work for inclusion into a juried art fair where the sheep are easily discerned from the wolves!), but have often been the “victim” of jurors!  so I was fascinated to read in this month’s Art in America an article by Peter Plagens about a recent visit to several artists’ studios in Mississippi to choose work for a museum invitational.   It’s a fascinating read. Looking initially at CDs from 115 artists,  he comments that “two thirds of the images were pure dross”.  (How I’d love to see a juror’s statement in a quilt catalogue that was that clear and open!!)  The rubbish included work such as overly sweet paintings of flowers or cute children and pets, trite photographs of “noble savages” (usually the disadvantaged), semi abstract sculptures, autumnal trees along a stream etc.  We’ve all seen the equivalent in quilt shows and magazines!  and apparently the main art world is no different, for Plagens comments “such junk is a constant in museum juried shows”.    And so he cuts down the 115 artists to 15  whose studios he decides to visit.  He adds that he felt that anyone with his background and experience in art would have picked most of the same people – that (like my experience with the art fair) it was not that difficult to reach a consensus..that maybe the process (to this point at least) was more objective that one would expect. 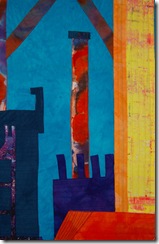 What’s most interesting is his thinking about the artists he ending up excluding from the show:  their lack was not that of skill or professionalism, education or training…but rather the antithesis:  the work was too predictable, too obviously slick or correct,  at times having a distinctly “commercial” feel to it.  Musing about the origins of this approach, he wonders if too much immersion in classes, in workshops and in reading magazines that have a similar aesthetic might not be the cause.  Then the work starts to feel jaded and formulaic.  Beware!

So let us all live a long time, work much, but freely and independently, and figure how we might tie a needle to the end of a long pole! Hang loose!   and thanks for reading!   Elizabeth

Posted by Elizabeth Barton at 7:02 AM

Elizabeth,
I would love to know which Art in America had that article? Great post!