One of the things I struggle with – both in my own work and in other people’s – is boredom. It’s very important to keep things interesting and there are several ways of doing that: contrast and variation being the most important. You can use contrast with any of the basic elements of design: line, shape, value etc. and, on a meta level, you can also use it with the way that those elements are organized into a design. That sounds overly academic! But it’s not meant to be…rather I’m trying to come up with an equation into which the design problem of “b – a – w – ring!” can be slotted. Boring was the one “dirty” word my girls were not allowed to use! – I didn’t care about any of the others! So you can see I feel strongly about it!

OK. For some examples: I could take a photo of a fence cutting across a meadow…and transcribe that fence perfectly onto my design sketch. But if the individual poles (lines) are all the same height, it would be less interesting. If I insert some contrasting lines – a little shorter, a little taller, a little fatter, a little skinnier, a little crooked…it becomes much more interesting. If I also alter the rhythm of the repetition of lines (rhythm being one of the ways in which we organize the basic elements) by increasing and/or decreasing the spaces between the poles then the fence becomes even more interesting.

I couldn’t find a quilt with a fence that I remembered! But here is a picture of a quilt called Beehive I made some time ago. I’ve tried to consistently vary the vertical lines that occur throughout the piece, while at the same time keeping them related to one another. Every vertical line has its own personality but is also clearly related to its neighbours. Even the tops of the buildings are all a little different, but also clearly of the same family. 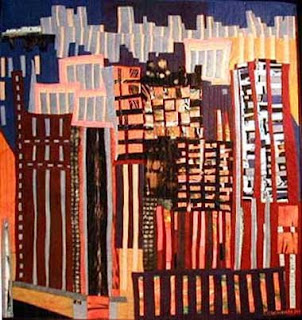 Back to the fence: I talk a lot in my workshops about starting with a Main Idea – or a “spine” as Twyla Tharp calls it in her excellent book The Creative Habit (this link is to an interesting review of it, next week I'll write more about what I got from the book). Once I have made the fence more interesting by altering elements and organization of elements, then I like to consider my Main Idea and see if further alteration would help to bring out that idea. For example I might be wanting to show the beautiful curves of the land, so soft and mellow . I could make the fence curving and soft and mellow too – but if my piece also includes the curves of the land, then making the fence more of a contrast to that will make the land softer and curvier…..Contrasts bring out differences! A warm colour in a cool palette will make the cool look cooler – a little pink glow of light on a snow scene makes the snow colder and crisper. A blue light might just make it look dreary!

Contrast and Variation!! I’m all for it!

PS Tomorrow I’m headed up into the looking for mellow blue curves with hints of orange colour!! And weird spikey fences! 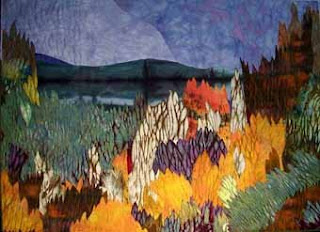 Posted by Elizabeth Barton at 7:46 AM