Have you ever head one of those days where you’ve got a wonderful (well, let’s hope!) idea for a piece, and you’ve dyed a great chunk of fabric that’s just perfect for the background – and then when you get it up on the wall, you’ve nothing to go with it?

That’s happened to me so often, you’d think I’d be used to it – but no….I’ve been struggling with this piece for days. My original inspiration was a steel mill seen across a great depth of choppy water ( – looks more like the sea than a lake). So I shiboried a super bit of water fabric: 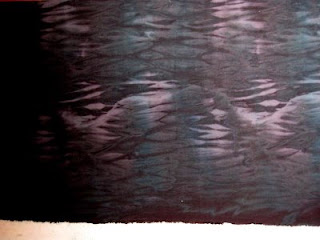 I don’t want to use it for the whole background, because I want a horizon effect…so I’ve tried a light value and a medium value with it: but they don’t really look right 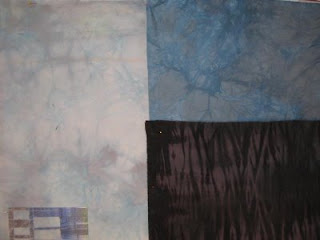 Using the same dark fabric at the top isn’t a good solution for it would reduce the depth significantly. I realized that last night in bed when I was looking at the night sky and thinking “yes, Carlson is right” even at night the sky is lighter than the land….(or water – because although water reflects the sky it also adds the water into the mix which darkens the value)….so even if I do a night scene I want the fabric above the horizon to be lighter.

So it looks like another day of trying to find the right value!!! And that’s just the background!

Meanwhile I’ve begun to cut out my fascinating little complex mill shapes but I’m also trying to keep my eye on the overall composition. Carlson is my sensei at this point:
“There probably never was a picture that was poor because it lacked detail or subject matter; rather the opposite. Bad paintings are usually so overloaded with useless detail that the essentials are obliterated”.
In my workshops when I stress Simplicity and Economy as being of major importance in composition, I definitely get some blank looks!! But getting the basics right in the simplest and most elegant way (mathematicians will agree) is the key.

And now, back to that wall! and Lord what a complicated mess it is! No wonder I can't figure anything out! 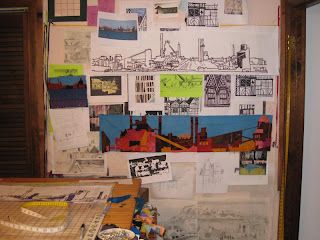 If you have been, thanks for reading!! Elizabeth

PS: here's the view out of the window....very distracting! 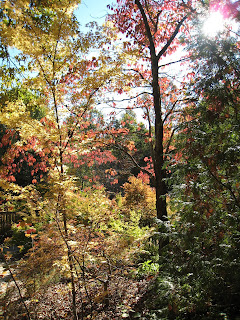 Posted by Elizabeth Barton at 9:07 AM

Good grief, I hate when that happens! I feel your frustration, Elizabeth -- so many times I have the perfect piece of cloth and nothing to go with it. I usually end up putting it away, working on something else and finding that 5 months down the road, I've dyed or printed something that works perfectly. What a process!!

I think it means that it's time for a DYE DAY!

Simplicity. The concept is clear and so is the result. still there's trial and error--at least for me--in determining what is essential. I'm getting better and what fun it is to grow and learn which bits I can do without. Keep writing,
Jackie