The illusion of movement in art 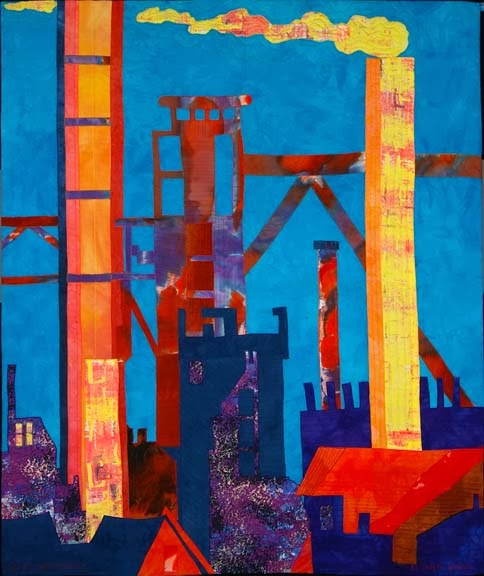 The illusion of movement is a great way to make an artwork very effective, but it’s quite difficult to do.  Recently I challenged my master class students to create designs that showed movement and many of them found this to be quite a struggle, particularly if they didn’t want to portray a human being or an animal actually in motion.  The Italian Futurists actually praised movement so much that they said that a speeding car was more beautiful than Venus de Milo!

Movement is involved in many aspects of our life.  We would literally die if we didn’t move. A tree that doesn’t move in the wind is likely to be a dead tree.  Movement is necessary to withstand external force. Even skyscrapers and bridges sway…and of course (to most of us at least!) the earth moves around the sun!
Anyone who has taken a life drawing class would be aware of how very difficult it is for us not to move…how amazing some models are in not moving…but even they are blinking and breathing!!

So since our existence and our environment is all about movement, why is it so unusual to see movement portrayed in art work?  Is it because we’re so used to looking at photographs where the action is stopped?  In many ways photographs distort our views of the world.  For one thing, a camera only has one eye and we have two!  A camera dulls colours, omits nuances and squashes values at each end of the value spectrum. 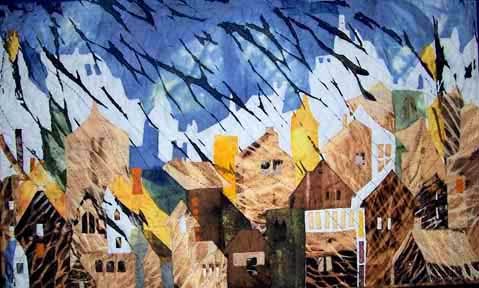 Another reason of course, it’s that it’s difficult to portray movement – as my students found out!  While it would be difficult to make art quilts that actually DO move, it is possible to create an illusion of movement.  And such illusions make for very dynamic pieces.  Here are links to some well-known artworks that create those illusions:

And here’s a link to many other such photos that he took:
http://www.metmuseum.org/collections/search-the-collections?&who=Harold+Edgerton&deptids=19&pg=1

or then there's Bridget Riley's optical illusions which shift constantly:

Movement is also indicated by unstable body positions - figures which appear to be just off balance.  You see this a lot in sports photos...take a look at your newspapers sports page!  What's interesting is that the best photos of sports people is when they are in action, just plain "portraits" are not very exciting at all.

"Kinaesthetic empathy" is the name given to the involuntary feeling within our own body that such an image produces.  It's a great way to give a sense of movement to an art work.

A feeling of movement can also be created by contrast.  This is one reason why we feel that the people might be moving when they are portrayed in a much more static setting - and painters use this a lot. The "off balance" or diagonal line is contrasted by a very static stable vertical or horizontal one. The designers of fast cars now use streamlined curves and diagonals rather than vertical lines in their designs: these cars look like they'll go very fast even just sitting by the curb.

And now I'll have to see if I can master that challenge myself!
If you have been, thanks for reading.........Elizabeth
remember t o email me if you're interested in buying a signed copy of my latest book: Working In Series.

Posted by Elizabeth Barton at 2:33 PM

What a great post! Filled my mind full of ideas and Makes me want to go and have a go straight away. thanks