The artist as flaneur 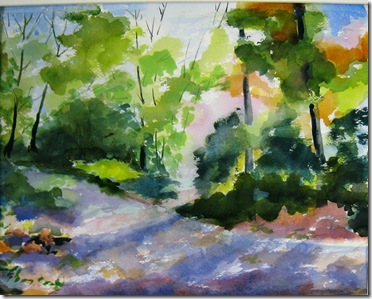 In a recent (May 11) AinA, I read a very interesting article based on a discussion with 5 artists about the nature of their non-art activities. They were asked: What helps to nurture creativity? What influences your work?

Most artists find that their ideas and energy ebb and flow – when the tide of creativity is rushing in, you’re flying along on the crest of the wave not noticing anything except the movement and the exhilaration. But then when it draws back, you’re dragging, every pebble niggling, reminiscent of Matthew Arnold’s experiences on Dover Beach:

“You hear the grating roar
of pebbles which the waves draw back, and fling,
at their return, up the high strand,
Begin, and cease, and then again begin,
with tremulous cadence slow, and bring
the eternal note of sadness in.”

Well – perhaps not that bad! At least not for most of us! 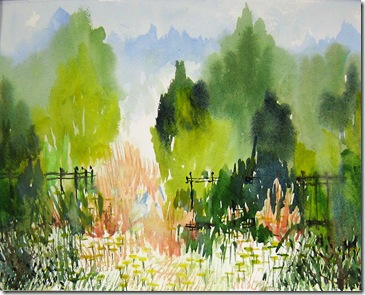 In a panel discussion: “Parallel Practices: When the Mind Isn’t Focused on Art” at the College Art Association’s annual meeting in NYC, Douglas Dreishpoon asked established painters and sculptors

Petah Coyne, Philip Taaffe, Kija Celmins, Robert Gober and Janine Antoni what they did when they were not making art. What do they do when ideas seem to dry up?

They all find it helpful, they said, to have quite different activities – things that don’t relate to art at all but, surprisingly, are able to inform their work “in unexpected ways”.

Of course there were several of the “usual” activities: reading, dancing, gallery visiting etc, but others less common are more ingenious.

Petah Coyne finds “wandering” helpful. She defines this as “visiting new place with your eyes wide open and your senses alert”. Sometimes she sees odd things e.g. an apparent pile of rubbish bags which turned out to be a “house” built by a homeless man, which later lead her to think about sculptures which could incorporate a similar hidden unexpected presence.

Vija Celmins gardens and reads – she especially loves mystery writers like Henning Mankell – so good to learn that reading mysteries can improve one’s art! I’m off to the library! 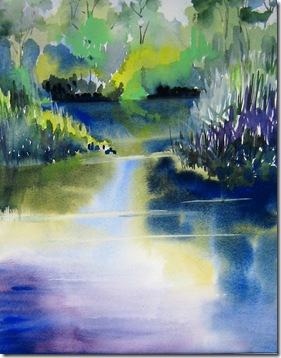 Janine Antoni states that she has always had a “parallel practice” which permitted her to explore ideas freely,she felt, because she wasn’t putting pressure on herself to produce. In her parallel practice she explores similar concepts but in a very different medium. This was fascinating to me because I’m learning to paint in watercolors and I’m finding that one is attempting to solve similar problems in composition but in a much shorter time that that involved with art quilts. So I can explore an idea pretty quickly – though it may take me 50 watercolors to get it right! However, Antoni has taken this to a very high level, she writes: “.. the elusive content I sought resonates in the gap between one form and another… by exposing the limitations of each form, I could mine the possibilities that exist between them” and that’s why she has chosen to vary the mediums within which she works. It’s great to be able to justify playing with different mediums in the way!

Antoni has found that dance is the perfect way to explore some of her ideas further. Her subject is the body and she feels that her “kinesthetic exploration” can reveal hidden and undiscovered ideas that do not surface with a more cognitive approach. Thinking about a problem often leads to rehashing old ideas, she feels, and she’s often been surprised to discover a solution through movement. It’s a fascinating concept…I wish she were here so I could ask her whether it was the solution to a compositional problem that the movement solved, or rather that it helped when one was stuck for ideas. I have always found that an activity like walking can help one to think more freely round and about a subject.

She feels that people tend to have a preferred sense for experiencing things: some learn better visually, some aurally, some via movement, many through different combinations. It’s curious to me that many motor skills are taught aurally, when you wonder whether or not some way of putting another’s body through the actual feeling of the movement might not be a better way to learn.

Philip Taaffe (he does those wonderfully complex pattern-like paintings) describes thinking about his “patterns and rhythms” as sometimes so difficult that he diverts himself, takes time off from the problems, by shooting pool or playing chess. The complex spatial problems of a game of pool (billiards), relate significantly to his painting and can help him to solve difficulties there too. Old silent black and white films with their complex shifting rhythms of light lead to a free floating contemplation of visual possibilities. He notes that “seemingly random and significant” events can surprisingly inform his work. He calls this an “ingathering of memories” that one takes to the studio. Reading philosopher Bertrand Russell’s essay “In Praise of Idleness” led to a key realization that no knowledge is wasted however apparently insignificant and that there is a “sanctity” to idleness. He wonders, in fact, if “unemployment is the job of the future”. How will people learn to cope with this? The pressure to succeed can lead to needless misery, the idea that you should work hard and make a lot of money may not be the best way to live. He thinks we should consider working less, enjoy life more and learn how to appreciate art!

“Learning to be in the world, as a finely tuned observer, is a profound lesion that art can help us with. Artists are still the flaneurs of our time. Our responsibility is to teach others how to live in the moment without feeling guilty about it”.

Maybe we’re going to come into a new age, where striving to get higher and higher returns and “quality controls” are seen as archaic and irrelevant goals – instead thoughtful observation of our world and its beauties and careful planning to preserve them on every level will become paramount. The artist as CEO!!

If you have been, thanks for reading!  And do comment on what non-art quilt activities you have found helpful in informing your work.  Elizabeth.

Posted by Elizabeth Barton at 7:14 AM

It's been 40 years since I worked as a newspaper journalist but I am still a news junkie. Almost all my quilts are about politics, so I guess that's a case in point.

I read the same AiA article and was underwhelmed. So artists have hobbies and outside activities, just like practically everybody else in the working world? That's a big deal? Recently you commented that you'd rather see/read about an artist's work than her studio. I feel the same way about her hobbies.

To me, a lot of art is about "problem solving"--how do I get the result I want? I've always found that letting the problem linger in the back of my mind while I do something totally different allows my subconscious to come out and play. Walking, playing solitaire, exercise, or scrubbing something are my usual choices--part of my minde is engaged while the rest is free to roam.

I also try to regularly view art in all media, get out into nature with my eyes and mind open (I like that quote from your post), read, and do anything else that I feel will enrich my perceptions and understanding of the world and to refresh my spirit.

BTW, I also like learning new words--thanks for "flaneur."

Love your art on this post! I've never ran out of ideas... maybe because life has many challenges and responsibilities OR my ADD won't let me stay with one thing long enough to become drained or bored? Anything creative stirs my imagination, from the view out the window to the window sashing. For this, I am truly thankful.

Reading and of course photography (which can really get me going on the quilting), but in addition writing. Writing is so different that it sort of orders my mind and makes it slow down to consider what is important? What is progress? Where do I want to go?

I suppose these are hobbies, but these are places I turn to when I am having a dry spell quilt wise.

Making music does it for me every time. I play the lute, albeit badly, and am a traditional singer. As an artist, I work in a very unstructured way; as a musician, I am required to follow someone else's structures, but the sign of a good lute player is the embellishments/variations s/he adds to an early music piece. Working in that way somehow allows my unconscious to get on and solve whatever issues are going on in my art work.

I have to add to your Matthew Arnold quote: The poem (almost) closes with the line "Ah love, let us be true to one another."

That is a kind of catchphrase in our house, when creativity and excitement sink and we are slogging through the rounds. Nothing like a good time with one you love, whether it's a walk through the park or a date at the museum or just a good dinner.

I'm liking your watercolours - but why is it that I see your hand-dyes in them? Colour blends in the watr and Shibori like marks in the greenery!!!!!!