To be a juror 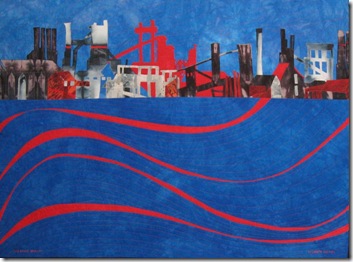 I was very excited to be asked to be a juror for the upcoming Art Quilt Elements show in Philadelphia next spring.  But as well as an honour, and exciting, it is quite a responsibility.  I want to make sure I have polished up my critical judgment:  that I have a “good eye”  - as they say –  which always makes me think I should have a parrot and a peg leg too!!  But I doubt the AQE ladies would be too thrilled if I turned up like that!

So I started looking at some juror’s statements as to what one should look for.  Obviously a strong composition is a basic requirement. Quilts that are all over the place, that don’t have good strong bones, that just look like they are thrown together would not be something I would choose for a show of this caliber.  Balance is important too: if something is leaning (visually) to the left or right, or has inelegant proportions (unless related to the subject of course), I would not want to include it.  And the piece should be unified, well pulled together, everything important in there, and everything unimportant taken out.

There are loads of quotations from artists discussing the necessity of getting rid of stuff that is not relevant.  It’s not only sculptors who have to discard the extraneous material! The art is in the editing.
”The wisdom of life consists in the elimination of nonessentials”. (Lin Yutang).

There should be a clear message, not a confused one.  The message doesn’t have to be world shattering like Guernica  - talking about Guernica, I heard a telling story  recently…apparently during the Occupation of France, a German officer went to see Picasso and there was a photograph of the famous painting lying on a table “Did you do this?” said the officer.  “No, you did”, replied Picasso.  Shiver…

Well, the message doesn’t have to be of that calibre, obviously, otherwise there would be very little art!  but I think the quilt should clearly say something..   it could be as simple as “look how lovely pink and purple  squares are!” (though I think the person would have to be a Very Good artist to be able to pull that thought off!). What did the maker intend for the piece?  And were they successful in doing that?

And what else?  One statement (alas of unknown origin!) really struck me:
“I’m looking for discovery when I’m jurying; something different, something mysterious”.
Some mystery, is I think, important – not confusion…but something that hints at greater depths and meanings.  I’ve bought quite a few art pieces in my time, and also not bought ones I wish I had.  And some of those I can remember so clearly – because of the mystery.  I remember a little dark painting of a shopkeeper holding up a bird cage – just what was that about?  I do wish I’d had the cash to buy it and enjoy the puzzle every day!!   Some ways in which artists install mystery is by using  lost edges or  by not spelling out every last detail – no ,you don’t have to show every window in the house!  Or,  marks that could be one thing, or maybe another….writing that you just can’t quite read (though I think you have to be careful with that one because it’s getting a bit over used).

Edrith Huws wrote:
“It is splendid if there is some inner tension, a hint of disorder being controlled.  that to me is the essence of an aesthetic experience.”
There are many technical way to convey this: rhythms that are syncopated or slightly broken rather than the obvious dum-dum-dum-dum of the funeral march, or slightly unexpected colour combinations.  Balance without rigid symmetry, lines that show the mark of the hand.  Homeostasis=couch potato!  And we know how interesting they are!

And also, of course, are those things that you do not want to see: stale copies of other people’s imaginations, cheap tricks and gew-gaws, the 500th piece in a series that was successful for the first 50 or so but now is so familiar you could make doormats out of it.

So, now is your chance to tell a juror what you think they really should be looking for!!!  I will read all suggestions very carefully!  and thank you, in advance, for taking the time to comment.  Comments are the blogger’s reinforcement, you know, without them the blogger would simply dry up and wither away…(hm, that makes me think it might be time for a nice cuppa tea!).

If you have been, thanks for reading!  Elizabeth

PS the quilt at the top, Strange Beauty,  was  my entry in the last AQE.

Posted by Elizabeth Barton at 9:13 AM

My criteria is less analytical ... does it keep calling me back for another look, and another...?!

I really haven't a clue about what else to look for since I've not really done much, yet. I definitely have not (yet) reached show stage. However, what you say makes me think. I appreciate seeing what is expected or necessary for a quilt to be art.
I am working (very slowly) on a quilt. I thought of nothing except the image I want to create when I started it. Since I started, I have stopped to learn more about composition.
Reading yours and others' blogs and having taken a couple of art/art related classes make me wonder about meaning or message. I see a lot about that. How does one know what that is when one is simply compelled to recreate a mental image?
I'm inclined to wonder if Grandma Moses had a message in mind when she painted. She might have, but I still wonder. I always had the impression she simply was recording what she saw... a lifestyle that was disappearing... but that may simply be my own ignorance.
I am happy to see you point out the mystery! This is something I know I want, but had not specifically thought about.
As for the rest... I don't think this is anything anyone else has done (at least not the same way -- the subject is certainly not new) and I have not even done 5, let alone 50 or 500! I know I don't even have my one voice or style, yet. Everything I do is new and experimental for me.

I look forward to what you say after the jurying experience. I find it one of the irritating parts of entering a juried show that you never know why you didn't get in or how close you were to making it. It seems a lost chance for learning how to improve what you do, assuming the juror has worthwhile things to say, and I know you would. I also realize the time that would take....
Your blog always makes me think. Thank you!

I agree with you that the element of mystery is critical - otherwise you will look at the work once and not feel compelled to look again. Something as simple as Morandi's bottles can evoke a feeling of mystery - doesn't have to be multi-layered or complex, it seems to me anyway. Always enjoy your thoughts.
Thanks.