I was asked an interesting question today about “the topic of naming quilts”.  Now M-C just wanted to know if there was a standard system that should be used but her question set me to thinking.  And, actually I should have mentioned in my call for the  Arty Quilt Show (see blog of last week) as well as an obscure theme, “your quilt title should be exactly 27.5 characters including spaces.” However, to be serious. For a moment, anyway. As you can imagine I was the despair of my teachers  (a very strait laced convent school in existence for “naice” young ladies since the 16th century for tending to see the funny side of things when I should not.  Back to titles.

I personally do not like titles that have no bearing on a piece. I had a joint show one time with a quilter who had very elaborate titles and I searched through her work to find how they related and it turned out they were simply lines from songs she listened to while quilting!!! I felt quite cheated.   Similarly I don’t understand artists who name a piece when it’s finished  after some arbitrary aspect of it that wasn’t the point of the piece in the first place: “The quilt with the wobbly edge”.

I also dislike “unnamed”.   How can one not have had words in one’s head when thinking about the piece?  It’s interesting that one of the other ladies in my current online class remarked that she could not work on a nameless project.  She found that having a name both inspired and focused her; even though  the piece might get re-titled it was an imperative starting point.  Many artists in many different mediums find it important to have a working title right from the beginning of the project.  I don’t understand how you could think about something in terms of “that thing currently on the wall” .  I even remember reading that, if you have no language, your ability to think, reason and cogitate is markedly diminished.  (And, as we know, most military endeavors have names – though, alas, there it doesn’t always aid reason and thoughtfulness.)

Now I know that in abstract art there was a period where making work about the process of making work was important.  I don’t think you’re ever making a piece about Nothing even if your work is purely about such formal or process issues.  For example (sadly I forget his name) the Italian (I think) artist who simply stretched a canvas and then slashed it (once) with a knife!  I saw it the the Tate/Liverpool – if anyone else knows the piece.    But if you make a quilt like that then surely you could entitle it The Slasher!!  or Slashed! or even Slashed when Sloshed!

And then there are the folk who simply number their pieces: “Portrait of Fred #42”.  You know that always puts me off.  I wonder if this is their 42nd attempt to capture Fred’s unique personality, or the 42nd Fred they happened to be asked to make a piece about?  Maybe they were obsessed with Fred and never had any other ideas about work?   Or  Landscape #124?  Was does that  mean?  It came after 123 and before 125?  I begin to wonder if they haven’t just found something that has now become easy for them to do, they’ve had some success with pieces like that and simply want to knock out a few (or even a lot!) more!  A propos of this point, we were discussing in my Working in Series class whether or not one could have too many pieces in a series. There are many reasons for Working in Series which are good ones, but it’s evident that one can go on too long.  In  every medium  you can find artists who are no longer stretching themselves by working in a series,  but who are simply copying themselves!!  To me, that's not a series that's just running in place! I think you have to ask yourself - does this piece have/say/explore something different...and if not, why not? And if you can’t even think of a different title for the piece then I would wonder if you really were exploring and stretching.

I think the name of the piece is  very important and I consider it very carefully.  If I don’t have the finished title initially I’ll have a working title which  might be  as long as a sentence and it’s up on the wall while I work.   For me the title serves  two purposes:  an identification so I can hold it in mind.  It’s like knowing the name of the neighbor, or the doctor or the people in your class .  I have the name and the named person/object immediately in mind when somebody asks me about it.  Secondly and more importantly it's an integral part of the piece, a very short summary of some of the meanings of a piece.

For example I did a small piece of oil drills, I quilted round them in gold thread. The title is "All that Glitters is not Gold".  The piece is not only about the awkward beauty of these strange objects obligingly and repeatedly dipping their heads to suck up the black juice, but also about the price we pay for that. 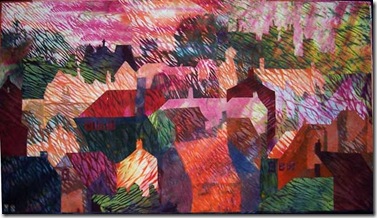 I made a quilt  called Red Morning. That was a description of the piece - it's morning light on a red town, and the sky is red. But also...I was referring to the old saying: Red Morning Sailor's Warning - i.e. times are going to get hard if we keep ignoring the environmental problems. 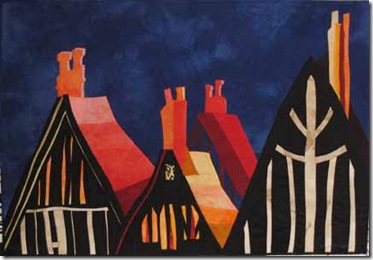 My quilt entitled Brighter at the Top, refers not only to that last glimmer of light limning the chimney pots at the end of the day, but also the fact that the better off we are (not obscenely! but in terms of not having to worry about money), the brighter and happier our lives are. Something we should remember. 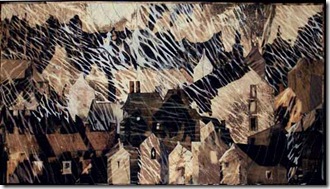 And the Arrogance of Calm refers to certain events in the last presidency but also to any tendency we might have to not worry about impending problems – especially environmental ones.  This quilt is from a series I made about Drowned Cities – nature’s revenge for thoughtless living!

Okay, this is getting a bit preachy, and I must admit I mainly want people to really enjoy my work and think it beautiful and want to imagine how marvelously their homes would be improved by having such a piece on the wall!! (including me!).    However, Titles Matter.  For that reason I put considerable thought into them and also stitch the title onto the front of the piece.

Well, if you have been!! thanks for reading…and do please comment…All of the above is just my opinion and I’m happy for you to disagree… carefully cogitated comments  come well to this forum!   Elizabeth

Posted by Elizabeth Barton at 10:39 AM

I must confess that I've always considered titles for my own work too much trouble, but, as of now, I am rethinking. I am rather obsessed with reading signage in museums, etc. but for information (of which there is rarely enough) not the title (which is rarely helpful to understanding what the artist wished to convey.) But, if artists used your system, titles would be actually illuminating! At quilt shows I read the titles/statements associated with the quilts I find the most intriguing or amusing.

I've been reading your blog for a year or so now, and I really enjoy your insights and comments.

I agree that titles are important, since they help the viewer understand the piece. And that they must refer to the imagery and idea, rather than to "Experimenting with New Materials" or some such. However, I seldom pin down the title until the work is nearly finished - or even completely finished. Allowing potential titles to percolate in my brain is part of my overall (slow) process of converting an idea to an image.

as you say, you have an idea in mind, but sometimes when you get to the end you find something else has been expressed more vividly. That is okay, too. if you didn't start with the original idea you may not have ever got to the final one.
Sandy in the UK
and why is the prompt word toxicies? A future title for a piece about things like nuclear disasters waiting to happen...perhaps?

I agree with you - one of my top pet peeves is "untitled" work. You might as well call it "couldn't be bothered". A close 2nd is the title with a number in it. Looking back and talking about our work with others, are you really going to be able to recall "Landscape #58"? How did that one differ from #57? Or am i thinking of #28?
Even if the title doesn't reveal much about your thoughts & work to the viewer, it should at least bring an image to YOUR own mind. It's like naming your kids "Boy #1", "Boy #2", "Girl #1"...
Sure it would be efficient but don't they deserve a little more thought?
Thanks for a great article!

I often have a working title for my pieces. As it gets close to being finished it becomes pretty obvious it's either the actual name or it's not. If not, the rummage and search is on for something else. Sometimes that's fun and sometimes challenging. Sometimes it seems hopeless. But something always emerges lol.

My QN piece was a rare bird - no real working title. When the time came it really needed to have a name I really struggled. An idle click on a rather random link brought me to an unfamiliar and transcendent piece of music with a wonderful name attached. I researched it and it seemed so right. I brought it to someone familiar with the language involved and he thought it was an amazing word. And that was that. When I showed it to another friend he wrote back right away that he really liked it. Then he wrote that he liked that somehow it seemed warm and feminine and just right.

A rare thing start to finish.

Must say that I v much enjoyed your sense of humour.

Reminded me of a joke I heard as a child.

"Red sky in the morning, shepherd's house is on fire!"