The person in the piece

People talk about developing a style or artistic voice and that is important…but that voice must also be saying something!  Not just blah blah blah or how cozy are the little houses with yellow windows in the snow, or  a pallid, predictable description of the beauties of nature…but something fresh, unique, curious and personal.  I think the work should reveal something of the maker, I don’t want to see work that anyone (including a computer!) could have made.  I’m quite unimpressed with those pieces where an image has been scanned into a computer and manipulated with few tricks in Photoshop, sometimes to be copied, other times even just printed out onto fabric and we’re all supposed to be amazed?  I suppose it is pretty amazing that someone could learn how to make ink or pigment stick to fabric…but that’s an amazement I can pretty quickly get over!

So in this my third (and, I promise, last!) blog about the David Humphrey talk, I’d like to report on how his paintings record his own thoughts and feelings.  What’s interesting is  how the work can reveal the maker.  Humphrey confessed that, looking at his earlier work, he is often embarrassed by the “heavy handedness of the psychological content”.  One can try too hard to impress: hint, discuss, don’t shout!  though, I think it is probably inevitable  that when you first begin to try to express yourself (whether you’re a painter, quilter, writer, song writer etc), it comes out a little bit clunky and self conscious.  And following that, there  may also be a typical stage to go through where you try out different styles.  Humphrey said that after trying on  expressionism, he went into several neo-isms! “I was interested in the liquidity of the paint, the nature of the support and so on”.  Definitely art quilters have done this.  You take a workshop in fusing or monoprinting or 3D flowers and for a while your quilts are all about the materials and the technique.    Confess!  you’ve been there, so have I!  And it’s a fun exploration, but it’s not a personal statement.

After these stages, Humphrey’s paintings began to focus much more on his own life; perhaps it’s a little self indulgent to do this, but I would always defend the personal story against the statistical treatise.  Why an individual does what he does and thinks what he thinks is generally a microcosmic reflection of the larger world – as Miss Marple so frequently discovered!!    So, having having a child, Humphrey “painted the baby as the imperial tyrant” in a painting of a diaper marked “Empire”.  I’m sure there are times we all felt that!  though didn’t want to admit it.  But, perhaps he was too frank, because the marriage ended in divorce!

He based  another series of paintings  on old photos from the family album: the classroom as a memory (on the left below),  and (on the right) referencing markmaking in painting photos..fusing dots on dresses with dots on the computer – and fusing the images of his three sisters wearing identical dresses. Triple fusion! 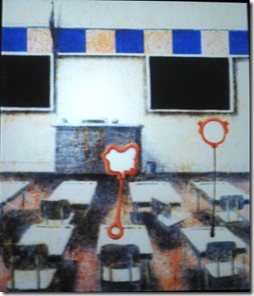 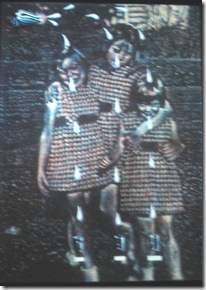 He was thinking about how a photograph can become more real than a memory:
“ Augmenting a fictionalizing of memories as evoked in photographs.”
His  playing about in Photoshop (deliberately lowering the resolution on the computer before projecting the image onto canvas) served the purpose of underlining the meaning.   Though he did wonder if he might at times be “telling a story and distorting it in the interests of making a lovely painting!”

Memory does strange things, and life even stranger.   His old family home was sold to someone else and then used as the set for a Steven King movie!  Quite freaky! Imagine the layers of memories and thoughts, past and present in that situation.  Humphrey made work based on stills from the film to express some of his experience in that unusual double entendre.  A strange quirky and personal event that would make a fascinating story if one met the person in a waiting room, or on a plane or train!!  Sometimes you can get the person sitting next to you to tell you something really curious about their lives!!

Humphrey went on to talk about many other series he had worked on trying to explore “Imagination’s plastic capacities!”  He feels that :  “Strength must be learned in weakness.”  This is the theme he explored in his earlier reiterations and augmentations of Ike’s paintings.  It’s hard to think how that could be applied to an actual art quilt, but I have found that it’s a great exercise in a workshop to look at Very Bad Quilts and discuss just why they are Bad.  Of course one can’t really do this online without offending !!  As the makers of the VBQ might be watching!! Whereas I know they are not in the workshops!!!

His appreciation of the visually curious in life was vast; he obviously really enjoys riffing on themes from other artists but also contrasting ideas almost as  visual neologisms e.g. in putting together images of beefcake and cheesecake!   Or the conceit of someone actually strolling into one of his landscapes in an Alice Through the Looking glass way: 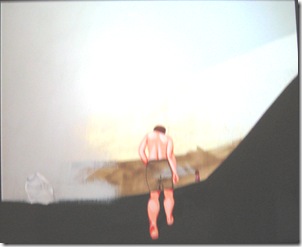 I loved his final piece, where he discusses the relationship between tough and sight, a theme important to him .  In the painting the subject is touching the picture plane – reaching forward  to try to touch us as we gaze at her…. 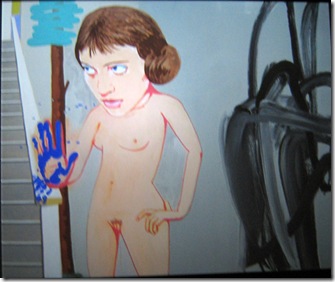 You may not like the painting, but it’s arresting and powerful and intriguing.  What is on the other side of the glass?  How much of your work is really a reflection of you and your unique personal impression of the world?

If you have been, thanks for reading!! and do please comment on my witterings!!!  Elizabeth

Posted by Elizabeth Barton at 6:53 AM

Jeez Luweez~! Finally someone saying out loud what I have been feeling (since I did it one time, years ago) about cramming a piece of cloth through a printer, copying a digital image onto it and stitching said transfer onto another piece of cloth and being astounded!

Get over this nonsense! All I could ever think of were tacky tourist t-shirts. Just because it can be done doesn't mean it should.

I've only begun taking a look at your blog, Elizabeth, but so far I like what I see. You're touching in this discussion on issues that have concerned me for some time, not whether technique alone makes art, but what makes a justifiable statement within the work: what art is it worthwhile to make?

I'll keep following you as best I can, and hope you continue along these lines. I'm still eager to learn . . .

Oh, and thanks for your efforts!

You have addressed a very current and important issue, but I am confused about the comments about digital work. Many use Photoshop to create art, whether whole cloth or pieced textiles (Linda Colsh, Joan Schultze, Gloria Hansen, Wen Redmond, to name a few).

My work usually starts with my own drawing or photo which I either create in Photoshop, or alter digitally, and then print on a textile. That piece may be used in paper lamination, stitched, used to make a thermofax -- the list is seemingly endless.

I would like my work to be judged based on artistic merit alone, whether I design the piece with my own fabric or use fabric created by others. Thanks for raising this topic!

What I'm not impressed by is when a person simply prints an image onto cloth and calls that a quilt. Using these self printed fabrics as fabrics with further manipulation, stitching and so on, cutting, appliqueing piecing - all the magical things that we do! - is something much more artistic. I think working with commercial fabric is difficult for in a way you have to overcome the designer's voice and intentions; having said that there are some people who do a marvelous job with this.

I think working digitally is a creative tool. Not only must you have an eye and take intriguing photographs. Your vision will show.
You can then leave them as is, manipulate them, layer them, fuse them with other photos, tile them, draw into to them using a digital pencil. Not to mention deciding how to print them. What cloth or paper to use. Add a digital underpainting, or not. THEN when they are printed, you can go forward in the creation.
Photo Shop tools are digital paint brushes!
It is a very creative technique- much as any surface design technique is!

That's so true, Wen, use your tools creatively and let your voice and the marks of your own hands ring through and you can make any techniques work for you. Use the tools in a careless, thoughtless facile manner and that's just the sort of work you end up with. Like they say, you've got to put in the time!