I‘ve always been intrigued by the edge of light along a piece when the sun is fairly low, or the shapes are backlit.  There’s something magic about the glow. 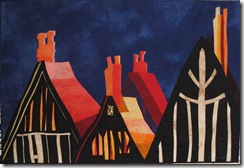 I made a piece called Brighter At The Top on which I tried to show that last golden glimmer on the chimney pots. 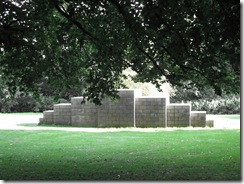 And I had seen another artist’s work at the Yorkshire Sculpture Park (alas I didn’t make a note of the name; I was so fascinated by the effect of the light on the cubes as I walked back and forth) make a large stone sculpture of this same effect. 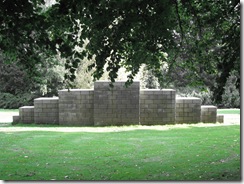 See how the light changes? 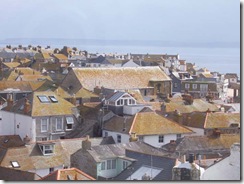 from the cafe balcony which has a great view but, sadly, such poor service that after half an hour waiting for a cup of tea we left in high dudgeon and thirst……..but the view is good! 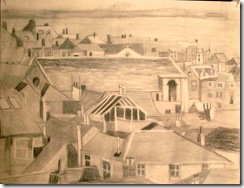 Then I made a sketch from my photograph, and looked for place where the buildings were seen as an edge against the light…..from that I made sketches just of those details and finally picked the one I liked the best and made a quilt called Edge of Light: 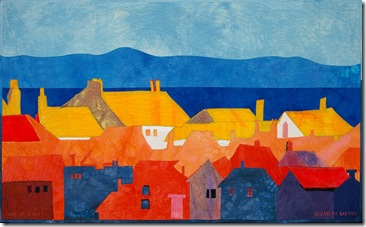 I reversed the values because I wanted the chimneys and rooftops to show the glow I love so much; I thought that putting the deep blue behind the golden yellow would really emphasize that intriguing edge!   I made the houses nearer to me deeper in color  so that the piece has some weight toward the bottom and also added a few (just a few, don’t need to spell it all out!) details to give a sense of depth.  I wanted to bring out the horizontal line patterns of the sketch.  If you notice there are 3 or 4 lines going horizontally across the piece in somewhat syncopated rhythms…..these contrast to the very straight edge of the sea, and the rounded edges of the distant hills.  It’s really a kind of 6 part harmony – I often find it helps me to think of music composition when I’m tried to compose a visual piece.  I’m no musician and, to my great chagrin, can only croak not sing….but I once did a harmony class and the concepts were (0n the music page) very visual.

So…these were my aims and process for this little quilt..I hope I succeeded!  And now to go and look for more edges!  If you have been, thanks for reading!   Elizabeth

Posted by Elizabeth Barton at 6:19 AM

I sometimes lie in bed in early morning and watch the light change on the railing outside my window. The definition between the faces of the skinny, squared posts is lovely! I am entranced watching that definition become less and less as the day blooms. Another favorite is when the clouds are limned (is that a verb?) and they look magical. By the way, it is possible that 'Edge of Light' is my favorite of all your work. Thanks for talking about the process for narrowing your focus on the scene and --gasp! reversing the values! With your help, I've gotten over my simple belief that the photo or sketched image was the only way! So thanks for that!

In Alberta, this wonderful glow happens twice - once at sunrise and once at sunset. I am in awe of it each time (if I get up early enough!) and love what you have done with light in these quilts.

Elizabeth,
Only a nominee? I think you are better than that!
Judy B

Yes, I agree about the effects of low lighting and like the way you have captured it in Brighter at the top. The photos you took of Sol le Witt's sculpture at YSP are great. That piece changes so much in different lights: the last time I saw it was on a dull misty winter's day when it loomed like a ghost.