Revelation: art is improved by subtraction, not addition! 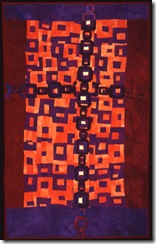 Michaelangelo realised this long ago when he said he “simply” removed from the large block of marble everything that was not the subject of the sculpture!

It has taken me the act of revisiting a piece I made in 1995  to come to the same conclusion.   I was given a commission to make a piece similar to Chain Cross (see left) . 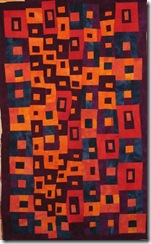 First, I began with the basic structure…I immediately junked the border – I think borders are a hangover from traditional quilts …where their purpose was simply  to extend the quilt over the edges of the mattress…since (with luck) my quilt is going on the wall (not on a mattress!), I had no justification for adding a border and it restricted the action unnecessarily.
The second change I made was to vary the fabric much more…slightly shifting hues, values and intensities brings a piece to life..it’s a little more effort than cutting everything out of one piece of fabric (which we’ve been taught to do doing with strip piecing) but adds so much more depth to a quilt that it is well worth it.  I must admit I wondered when I took the improv strip piecing class years ago WHY one should use the whole width of fabric to strip piece …who wants 45” of the exact same colour?  So….my advice would be NEVER use the whole width!!  Much more exciting.
The third thing I did was to try to make my value shapes join up much more…so the lights add together to form more of a cohesive pattern, as do the darks…I never even thought about value and value patterns in 1995.  But doing this gave my piece depth and movement that didn’t exist in the original.

The original design had a chain across it…   I tried several different ways of adding this chain.    I tried doubling it in purple and blue, I tried one vertical purple chain, and then a kind of spiral.  I did also try it with the light centres that I had on the original piece – but didn’t take a photo…they looked so bad..like giant zits! 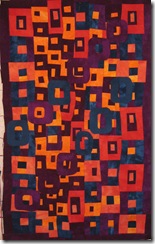 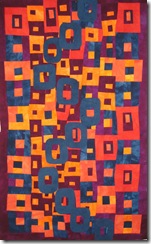 I wasn’t really happy with any of these possiblities, they just looked messy and confused: I remembered that I had added the chain all those years ago because when I first started making quilts I was afraid that I wasn’t putting enough into a piece.  I would add more and more things in case the quilt was boring.  Also every time I looked at an “in process  piece”, if I was unhappy with it, I had one solution: add more!  Eureka!!  I still  do that!! Aha!!

I sent the client the pictures ( I love to do this for a commission, try out all the different possibilities I can think of and then get some input)..hoping that he could see what I (with my more mature  and hopefully educated vision) could now see…that the piece when unbound and enriched with more colour and variety instead of the rote strip piecing did not need a chain or anything else.  It’s rich enough on its own without adding any clart!

and I’m happy to say he could!   So now I must baste and quilt it…before starting something anew.
If you have been, thanks for reading!  And now I must go and frame a dozen watercolours – life is so hard when you have TWO engrossing interests!  I think I’ll give up housework as well as cooking and shopping to make time!    Elizabeth

Posted by Elizabeth Barton at 7:05 AM

Couldn't agree more. And you can add to your quotations that by Antoine Saint-Exupery:

The difficulty is in the seeing, isn't it? I've just struggled with a plan for a piece that has eluded me (though at least I knew it had done so!), because I was mistaken about what it was in the scene that appealed to me. Now I think I'm on the right track. Thank you for hammering away at our looking at things we've done and paintings, quilts, photos, etc, that we are drawn to, so we can learn more about ourselves. Thank you!