I usually overlap several pieces and ideas at once…I find that works out better given my restlessness…if there’s a problem with one piece I can put it aside on the “other” design wall, and turn to pieces at a different stage.   I’ve finished the commission piece I wrote about before – finally opting for the less cluttered version: 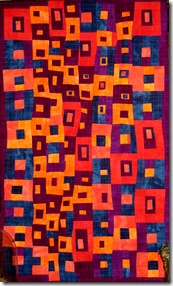 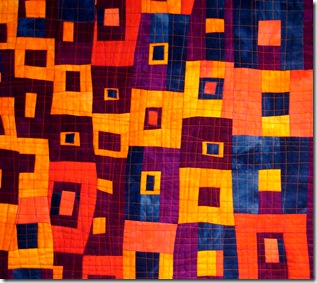 Full view on the left, and detail on the right.  I havn’t worked this colorfully, abstractly or traditionally in several years and it was a lot of fun…I think I might have another go at it!

However before that,  I need to make one more piece in the industrial landscape series for the Festival Of Quilts, where I’m mainly going to feature industrial pieces – but not entirely!! don’t want to seem too one-dimensional!

I’ve been sketching out ideas from some of my photographs: 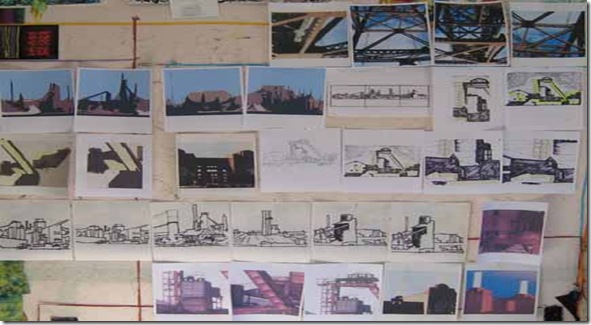 I definitely think I have enough to be going on with!   I blow up, crop, distort and simplify both the photographs and the sketches based upon them – I’m working from the steelworks in Ontario again, plus some bridge struts (lying on my back in the car while we went underneath (and no I wasn’t driving!)) and some old colliery pictures – my grandfather was a miner at Stanley in Co. Durham so I like that connection and of course I’ve visited the fascinating museum at Beamish – definitely recommended.  I also have some photos I took of Battersea power station when I took the Thames trip upto Hampton Court.  I love boat trips!  If there’s one to be had – I’m on it! Let me know if you need a companion! 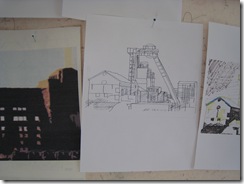 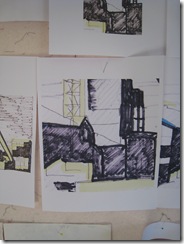 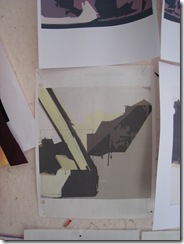 I’m going to let these “air” a little bit on the wall, while I pick out some juicy colour schemes .  I continually cast my eye over the sketches and gradually eliminate those of less interest.
While at the same time, of course, consuming Christmas cake, mincepies, apples and cheese and various libations to the the solstice gods!! All my good wishes for peace, health and creativity – or if you can’t be creative yourself, then an appreciation of creativity in others!
And, if you have been, thanks for reading!   Elizabeth

Posted by Elizabeth Barton at 7:32 AM

Thank you for your Christmas wishes! I've been thinking a lot about all that you write to us out here in cyberspace, I am a diligent student. You often recommend that we examine our own work and the work of others (quilters and other artists) that we enjoy and discern what it is that we appreciate about them, what they may have in common, then we can better create that in our own work and know whether or not we succeeded. As I said, I'm a diligent student, so I've been working hard on that, pulling out tons of books and trying to recognize what it is that I appreciate about the paintings and quilts I so love and enjoy. But, darn it all, I can't put my finger on it! I think I've been so intuitive in my appreciation to this point that such articulation is very difficult. I often identify incorrectly what I like about a scene or motif that I create a quilt around and spend a lot of time correcting that erroneous impression, finally getting it right. I had planned to figure out this bit--what I liked/appreciated about favorite paintings before I made more quilts, thinking they would be stronger, but that effort is doomed in the short term. I have realized that it will take some time and much more contemplation and articulation to determine. That studying--and enjoying--of art can take place simultaneously as I create. I feel good about that decision and know I'll be the stronger for such study. Thank you for being there and guiding me on. I do appreciate and take to heart your recommendations. Thank you and Happy Christmas with that dear grandchild!

As a City and Guild student working by distance learning it is important for me to understand how to go from photo to sketch to design. This post was very helpful althugh I would have liked to be able to see pictures of the photos and sketches a bit closer up