I know many of us are staying close to home these days...and this may go on for a long time...so...instead of constantly reviewing the dire numbers...compulsively watching people spouting hot air on tv, or worriedly eating and drinking and stacking piles of toilet paper (for who know when it might be in short supply again!)...let's figure out what benefits there are to our situation.  For one  thing, think of all those dreary appointments and visits that you don't have to make!!!  There's so many things we do that really don't have much point to them, or, even worse, much enjoyment!

And there are so many things for artists and cogitators to enjoy....making art, observing nature, watching dvds about making art, taking on line art lessons (there are a lot of those!*), reading and learning.
Slow cooking, slow pursuits like embroidery....the quilt below is covered in little stitches in the windows....one of my favorite quilts to make, and to look at too.
Reading, going through old photographs and making digital copies before they fade any further, but thinking about the people and places and times depicted.
And learning learning learning.... improving and exercising those "little grey cells"!!!! 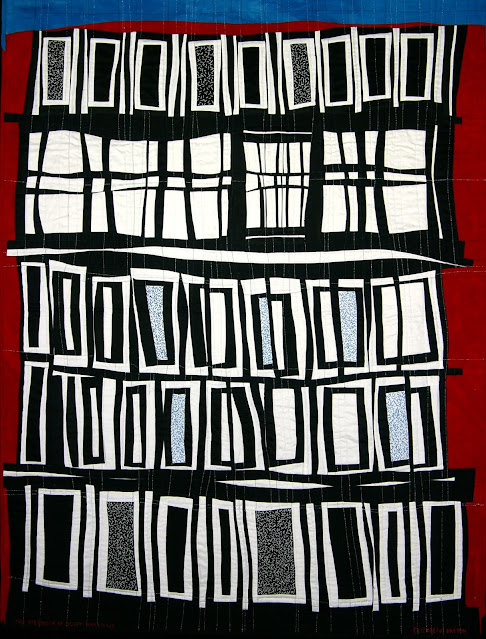 I love taking lessons so much - especially one on one..but any lessons really - from a good teacher...not one of those frustrating ones that tell you everything you do is wonderful - I'm sure we've all been in workshops like that...at first it feels good, then you think "I'm not getting anything out of this!"
Some, but not all, online classes have good feedback from the teacher.  I make a point of answering all questions from students very carefully and I can also work with you one on one if you so desire **.
Thinking about why learning is so good I realise I really enjoy learning new things, or - even more -  learning how to do/make those things I already do, better and stronger. I love learning more about art, and music, and more about learning itself.  I'm particularly interested in finding out the best ways to learn. Robert Bjork is very interesting on this - he's made lots of You Tubes.
And, yes, there's the 10,000 hours idea...but this number has been challenged on many levels.
If you haven't heard of it, a popular science writer summarized a number of findings on learning - (particularly with respect to music) and concluded that 10,000 hours of practice would make you an  expert.However, many researchers dispute this e.g.  Macnamara et al (2014) examined all the relevant research and concluded:

The original research was carried out by Ericsson, Krampe and Tesch-Römer in 1993 on violin students in Berlin. They noted that the best students had practiced around 10,000 hours by the time they were 20.  However to conclude from that research (as has been done)  that 10,000 hours is both a necessary and  a sufficient amount of time to become an expert is invalid.
In 2017, Ericsson and Pool wrote a book about the limitations to the 10,000 hours idea **. (by the way there are a lot of negative reviews of this book too!).  One of the big problems with the 10g hours theory is that the variation of the number of hours the students had practiced was great, some of the better ones had done less than 10g, some more...10 g was only the average. And, there are other studies suggest that it takes 10 years  rather than 10k hours...to achieve a good level of mastery of whatever craft/acitivity you wish to learn.

And what does "practice" actually mean?  Making or doing the same old same old just doesn't cut it.  Everyone does agree that you need to push yourself further, take risks, make the tasks progressively harder, get lots of feedback about mistakes or weaknesses and then devise specific strategies to work on those.  As the athletes do.
People who are very honest with themselves about their work, and who gain good feedback - even if difficult to hear - (and believe me I've been through that!) -  do improve faster than those that keep repeating the same stuff.  Often it's when you hit that brick wall and struggle and struggle and really think about what you have to do to overcome it that you make the most progress. 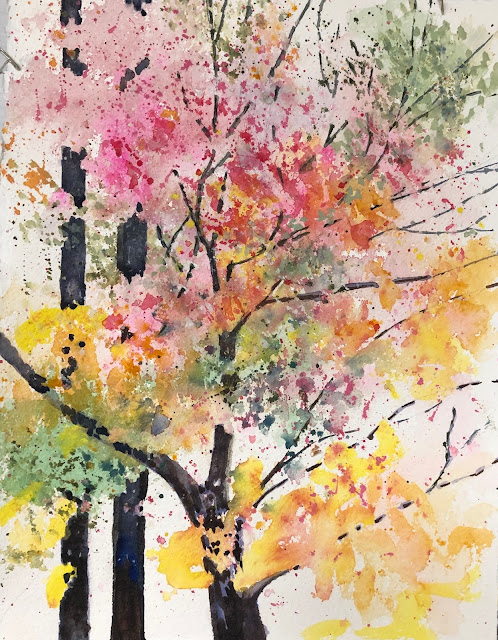 The research on so-called brain games also suggests that it's not just using our brains that makes the differences, it's taking on ever more difficult tasks.  So, if you want to get anywhere, it's probably not going to be easy.   But then...you are in good company!  If you learn a new brain game and then just settle into playing it over and over,  the brain begins to make things automatic. That doesn't lead to more cognitive strength.  which is why most "brain games" are completely pointless once you've got the hang of it.
NOW...we have the time to learn...no excuses!  No dashing around on all that mindless stuff!
We have the time to learn, to listen, to look, to absorb...let's celebrate that instead of bemoaning what we have lost.
So ...what do you think?   Is there a way to consider Isolation positively?
Please comment!!
And, if you have been, thanks for reading.   Elizabeth
*I have ten different online workshops with the academy of quilting - reasonably priced...and low numbers in the classes so you can get plenty of attention!
** I do private tutoring too.  Please write me: elizabethyork100 AT yahoo.com for more details.
Posted by Elizabeth Barton at 11:31 AM

Elizabeth, just so you know you aren't sending these cogitations out into the void, I am sure there are many like me who read your blog all the time but just don't comment. For whatever reason. I am impressed that you keep talking to all of us since we rarely participate. Hard to have any dialog that way! I do love your posts and find them inspirational and informative and thought-provoking. So please keep posting and I will make my attempt to comment more than just a good intention.

Thank you Mary Ann!!! I do so appreciate hearing from you and knowing that there really ARE readers out there!!!
Having feedback is a great reinforcer....I did slip and not post for ages...health issues mainly....but now we are all free of many mundane pursuits (! haha!!), there is a little more time to blog.
We have to make something of this strange time we're going through, alas there's nothing we personally can do to alter the political climate, but we can keep ourselves and families and friends safe, and also support those local businesses that might go under and are so important in our communities. We have a very few "real" restaurants, not just mega chains, and we're ordering out once a week...we don't want them to close permanently. some people are getting their hair cut outside sitting in the hairdresser's garden!!! Stuff like that. I must admit I'm simply aiming for the Yorkshire terrier look!!!!
so glad you commented. Elizabeth

I do not mind isolation and agree that it is a great time to do the things you want to learn. I really want to take a class with you but summer on our 5 acres of new house and landscaping is not the time. Second summer now so my quilting mojo is back! Perhaps this winter. Luv your cogitations!

Hi Elle! Good to hear from you...and sounds like you're having fun landscaping 5 acres - that will take some doing...hope you are getting good rainfall...and good to hear that the isolation isn't a problem. We do have to make the most of things...it's going to be a while yet till things settle down - meanwhile, as artists, we can take the time to grow...as well as plant!!! Thanks for writing! Elizabeth

Elizabeth, I have a problem I don't remember having before the pandemic. It's almost like I'm paralyzed by having too much time and too many choices. I feel untethered and aimless. Even when I have my supplies all set up and a list of projects I want to do I dither around. Every evening I am gung ho to create and in the morning I feel ho hum about it all. It's not artists' block is it? Maybe just mild depression? This isn't like the me I used to know. Thanks for any insights.

Hi Mary Ann, and thanks for writing...you ask some very good questions and I shall continue to cogitate upon them...I'm thinking the problem and my thoughts on it might make a good blog...so I'm going to answer your questions in my next blog...of couree I will not use your name, and will change some of the words. I do appreciate you writing because it's quite likely that many are experiencing the same thing.
I don't know if I have any answers!!! but I'll try!!!
Elizabeth