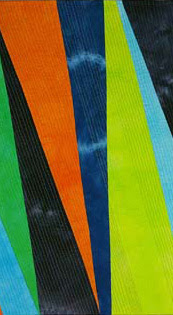 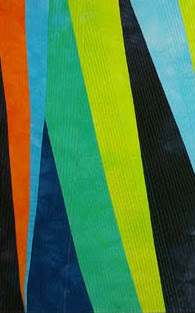 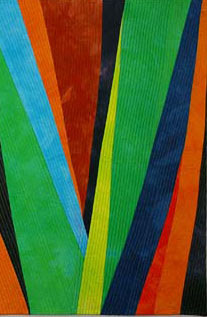 Posted by Elizabeth Barton at 11:33 AM

Interesting. My daughter makes an excellent living following those exact principles. She just finished a residency at Fullerton College where she exhibited her new experimental fine art paintings. She writes and illustrates books and also does client illustration work and numerous other products for sale. She teaches on a couple of web platforms. She amazes me.

For a few years I've been following Austin Kleon, author/artist of Show Your Work and Steal Like An Artist. Show Your Work does not address your thoughts directly, but indirectly discusses the synergies between continual creation, sharing of process, and sales. I guess this is art, teaching, and product creation/sales.

I do think quilts can be difficult to market. Because most people think of them as home decor (like a couch or coffee table,) there is less layman's appreciation for process and time involved. And that makes it harder for them to see the value of the quilter's time, and imbue the quilt with that value. Smaller pieces created/sold as ART (not as placemats) are probably easier to market in some ways. (Note on placemats -- if you value a "homemade" or "crafter-made" placemat including the amount of time of the artisan, they would cost far too much for anyone to use them on the table. I've written about that on my blog. Here is a link: https://catbirdquilts.wordpress.com/2016/05/13/how-much-are-those-placemats-worth/ )