I have a Working in Series class coming up with The Academy of Quilting
and it lead me  to think about my own series that I've worked on over the years.
I've made an awful lot of quilts!!!  Thank goodness many have left home, otherwise, I'd have to move out for lack of space for myself.

It just seemed natural to me to work in series from the start...I think it's because I didn't have access to a lot of really fun workshops (time, geography, money, kids etc)....and I've always made quilts about my own life.

My first series was about Windows...coming from a dark Northern city, windows were always an important feature of a room.  In our old Victorian house in York the upstairs bedrooms had only skylights, but you could stand on a stool and stick your head out of the roof (literally!) and look all round.  I like the idea that the window frames the view...and when there's a slight breeze it's like this lovely little movie going on outside the window...leaves tossing up and down, shadows and shades...

BUT I also liked it when you walk around at night - in a city - and there are all these little vignettes of indoor life, especially interesting when seen from a train!  Reminds me  of the film "Rear Window"!!

so my first series was Windows, here's a typical example: 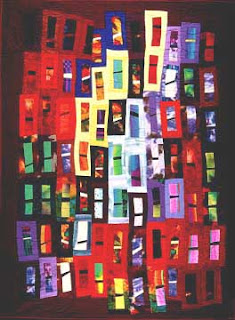 After I'd made about a dozen or so like this I began to put the windows into buildings: 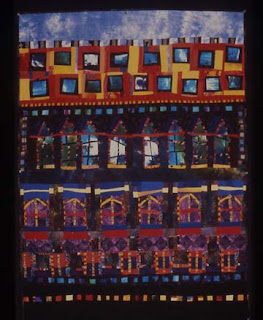 I made rows of different kinds of windows and stacked them up together...I'd seen a building like this in my home town and thought it worked just fine!  also a lot more interesting to do than making the same window over and over...

Well then I thought about the night time windows I'd seen and did a series like that: 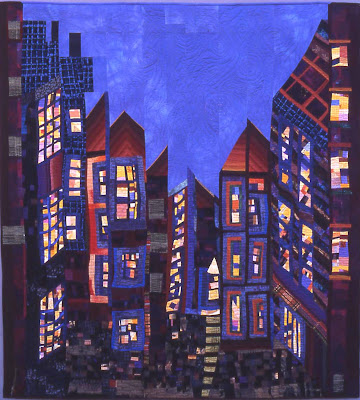 all the windows lit up at night and all sorts of  things going on inside!!!!

Gradually the building became more complicated and there were more of them: 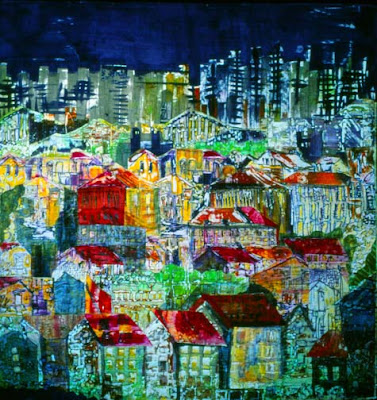 and I was really getting into the idea more of a city, than individual windows...and in fact entitled a series of about ten quilts, each 60" x 60" Idea of a City.   Above is just one of them.

Well, then I started thinking about how many of the old building in my home town (York, UK) had t exterior beams....now many of these buildings are painted bright white and the old beams are quite black...creating elegant and intriguing black/white patterns: 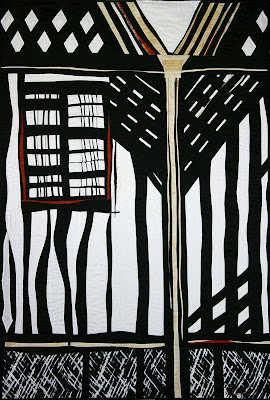 so now those windows are almost becoming like woodcuts.... and very abstract..

while colour is very very seductive and I dearly love RED, you must admit that black and white is totally gorgeous!!  so clean, so bold, so evocative......so I did a lot of black and white pieces.....

but then .....the Red really pulled me in...and I just (well!) saw Red!  I was involved in a series of very frustrating and tedious and argumentative meetings at work and seeing red was definitely the Emotion of the Day.....so I got into the habit of going to the meetings with a bag full of red scraps.... 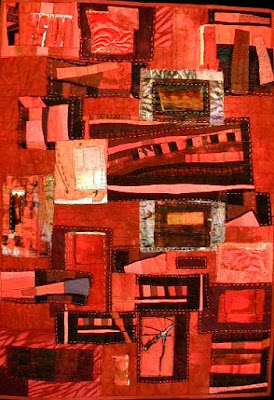 What a great way to cope with hours of people yelling at each other! and me calmly stitching away on RED........

but when things calmed down I was still with the old houses and streets: 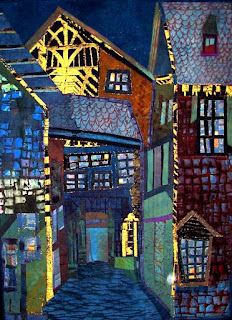 And then I read about the drowned cities....when Old Ma Nature really thinks we humans have totally screwed it up...(according to the old folk tales..) ....the cities get drowned... 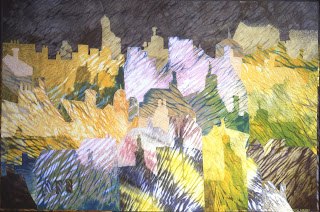 and so began my Drowned City series...and that was a lot of fun...basically I'd taken a new surface design technique - arashi shibori ( a kind of tie-dye) and applied it to my city series....

And I did a LOT of those...maybe 20 or so...before I began to be intrigued by other kinds of buildings...industrial buildings have a lot of different shapes that you'd never see on a domestic building and that got me into a series of quilts about industrial buildings.
Here is a typical example: 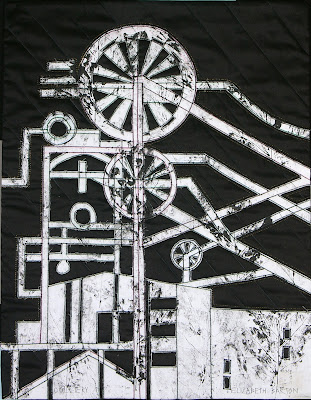 However where I live now there arn't cities or industrial building, there's a pond - and that's what I see every morning: 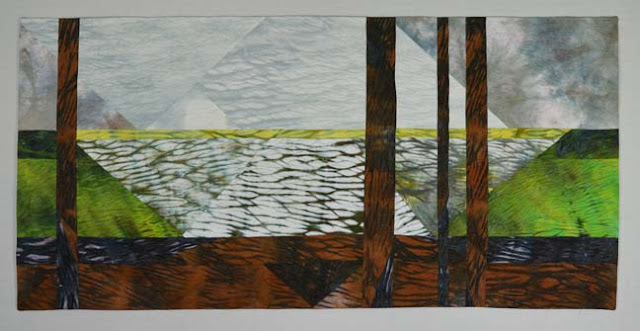 One of the reasons we came  to America was all the beautiful space there is here!   ....so now I'm enjoying creating a series of almost abstract quilts about the space and openness that I love....

I think  Working in a Series (and I've written a book about it) is a great way to further your talents and career as an artist, but it's also a lovely way to really explore something close to your heart.

Love the comments!!!  Do keep on making them.....
And, if you have been, thanks for reading!   Elizabeth


Posted by Elizabeth Barton at 1:28 PM

I think series work is the best way to work out design problems. I've mentioned before that I do medallion quilts primarily. I've done dozens of them, and at this point would venture that I know more about making medallions than ... anyone else. Other than format, they don't look alike, so perhaps others wouldn't think of that as a series of work. But one leads to another, and I can see design issues now as they arise in ways I could not when I started.

I've also mentioned before that I own your series book. I have a small library (for a quilter! only about 100 books!) and your books are two I will keep.

there's no doubt - if you focus, you get a lot better at what you're doing! Look at any profession, the ones who are really good at something are those who have focussed on it for a long time.
Thank you, Melanie! Your medallions are beautiful....and how lovely to have a quilting library - and I'm honoured that my two books are a part of it. I must admit that buying art books is a significant weakness for me!! yes, it's true...I should focus!

way back in 1986 just after I had started doing patchwork I set myself the task of making a Year Quilt depicting world events. The task I set myself was that I would do them until I was fed up or fell off the planet! Events of 1912 was my last of the 27 years of them. I was fed up depicting natural disasters like earthquakes, flooding etc and conflict and forest fires. While doing the series I made a number of pieces that could be considered part of the series. Two peace quilts as I live in Northern Ireland where we had many years of conflict (still not fully resolved: also a hanging called 10 years of earthquakes using photos of the images in my year quilts and then a 3 piece hanging depicting the unfolding disaster of The earthquake and Tsunami and Nuclear Plant in Fukishimo, Japan 2011.This last piece is due to be shown in an exhibition near Fukishimo in 2017. An exhibition curated by Roberta Bacic relating to families affected by conflict and natural disasters.

Each of the Year Quilts has a file of newspaper cuttings relating to the events I have depicted plus other miscellaneous cuttings like medical developments, achievements etc.

The 27 year quilts/hangings gave me opportunities to experiment with techniques and in a way became a learning process. They can be seen on my website www.irenemacwilliam.co.uk

I always say "Series are Great, you don't need a Different Idea every morning" Probably 1100 Tree quilts, and counting..
HH