Memoirs of a Serial Quilter

Somebody told me that there was a discussion somewhere about working in series and about how some people were doubting that it was possible to make a  series of representational quilts.

Since I have always been a serial quilter,  (and have actually written a book about all the series I've work in) (and put together an interminable Power Point lecture which I would happily show you for a generous donation!)..I would certainly feel that it was entirely possible to make a series of quilts about anything at all, in any style, whatsover.    The most determining thing about doing so is that you are sufficiently interested in the topic to WANT to do it...something that drives you forward to explore the idea, and make another, and another and another!!

My very first series was all about Windows...I come from Yorkshire.....it's often grey, the winters are long and the days are short, and we needed all the light we could get....windows were really important.  My current house now has twice as many windows as it did when I moved in!  74 to be exact - I'm not kidding!  so you can tell I'm a little nutty about windows.

Here are some of those first quilts: 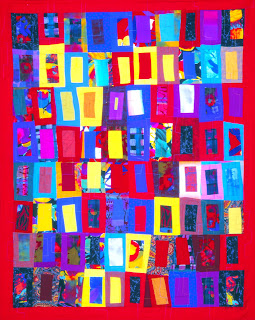 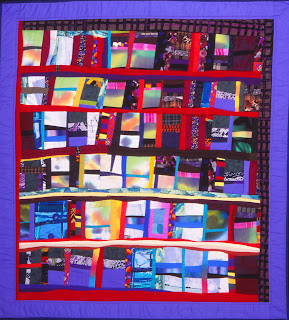 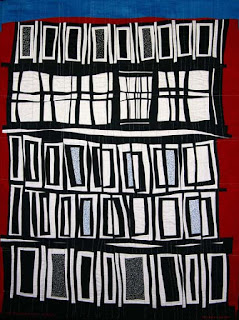 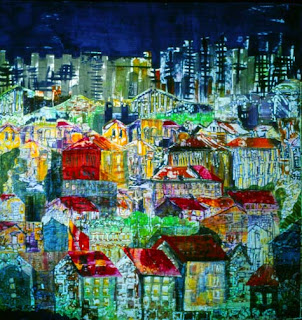 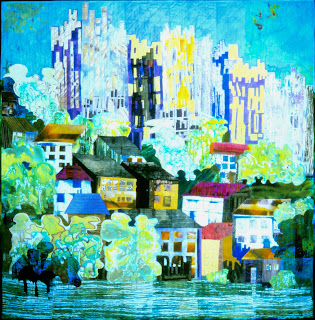 And then there was my industrial series: I  must have made 8 or 9 about this steel mill in Hamilton, Ontario.... 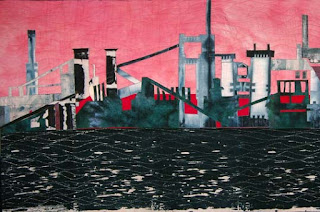 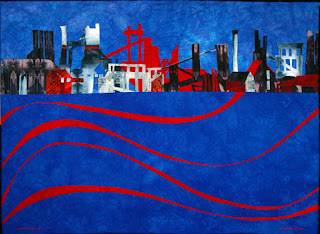 I also did a series about the old streets of York, and a more abstract one about memory called Red Shift,  and one about rooftops and chimneys, and one about landscapes I love, and one about my current town...and...and...and....
It's really great to work in a series, there are so many benefits...plus each one moves you forward to the next...
And, of course, it just so happens that I have a new class starting with academyofquilting.com
next week entitled Working In Series!!  The series can be abstract, or representational, or somewhere halfway in between....serial work is NOT limited by the type or content of the work. And, it's a really deeply satisfying way to work.
If you have been, thanks for reading!  And do write and comment about your own experiences as a serial quilter.....                    Elizabeth


Posted by Elizabeth Barton at 4:58 AM

As you know, I am a committed serial medallion quilter. I have made dozens over the last 4 years and am nowhere close to done, as I keep finding new facets to explore.

But this made me laugh: "(and put together an interminable Power Point lecture which I would happily show you for a generous donation!)" Do you mean YOU will give ME a donation, for the pleasure of showing me the PowerPoint? You're ON!! :)

I Have an Idea-Quilting, Art, Etc said...

Haha I aspire to be a serial quilter. I enjoyed seeing the photos of your series. I am inspired to try again.
Thanks for sharing your journey.......and someday the PowerPoint!!

Leigh in Portland (we are not burning down) said...

"about how some people were doubting that it was possible to make a series of representational quilts."

Oh heavens. Makes me want to say, "THINK PEOPLE! Use your imagination for 2 seconds!"

Not a one of them has ever take a photo of something from two or three different angles because it looked cool? Can't get more representational or serial than that. It's just slower if you quilt it.

I wish I were a serial art quilter. For now I'm focused elsewhere (f/t job, gardening, spinning, knitting, beading, sewing, embroidery). So much fun to have so little time to have it. :)

(grin) Well...you know from my being in your Master Class that for me it's the rolling prairie landscape...sky, grass, trees, hills, sloughs...over and over and over again! ;-) Clearly I am smitten!

I did a series of birds (ten over about 6 months) and I was amazed at how much I learned from one to the next. I never doubted that you could work in a series with representational work, and I still don't!

(Here's a link to them all together if you're interested: http://kitlangfiberart.blogspot.ca/2013/04/taking-flight-all-together-now.html )

Your bird series sounds lovely, Kit, unfortunately the link wouldn't work...but I really take your point that one learns a tremendous amount from one to the next. thank you for commenting!