Some people appear to have both the fortitude and the time to spend hours in their studios. Alas, I'm not one of them......my time is very broken up not only by calls on it from outside (as it were) but also by a restless internal clock that only seems to work for about 20 minutes!
So, often I worry that I will never get anything finished....however I've discovered a way to do it. 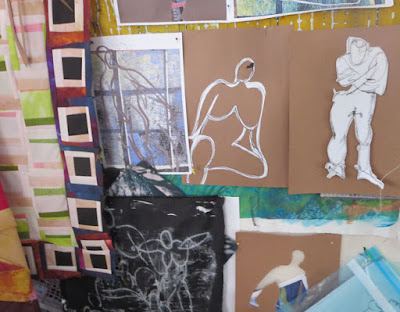 When I'm in the first sketching phase of working out a new piece, I make sure I do one sketch a day - now it's great if I do more, but one a day is the rule.  In a month that means I would have around 30 sketches up on the wall from which to choose - and usually there's more..because, of course when you've done one and you're looking at it.. you think, hmm now I've done it that way round, but what if I tried it this way round.  Or, would it work better as a square than a rectangle?

Gradually over the month - or whatever the period of time is - I realise that some sketches are a lot more compelling than others, so then the duds get dropped into recycling...the rough diamonds (yes! I'm an optimist!) move onto the value stage.

In the value stage each of the sketches has to be worked in at least 3 different value studies, I don't let myself be satisfied with just one.   And the goal for the day....the value studies for one sketch.

Now I've a wall full of value sketches, I keep popping in and out of the sewing room - some have life, others, don't - off with their heads!!!  and gradually the keepers emerge. 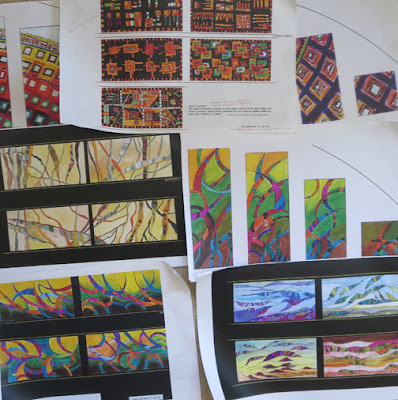 The fabric is chosen...now, I don't know about you, but pulling out all that fabric is the easiest part of the whole affair!!!  One could do that for ever!!!  Once I've got my fabric chosen, and arranged by VALUE (yes value not colour!), then I can see if I'm missing anything, or any stand out as being horribly wrong.

The cutting stage: again the rule is: one piece cut out per day, even if I'm dead on my feet and the house is filthy and the guests are coming down the driveway!!!  Get ONE piece cut out and pinned in place!

If the quilt has 50-60 pieces...then in 2 months all will be cut out - more or less...sometimes I just cut a chunk approx the right size and then refine it later.

The Sewing together stage is also One per Day, today's ONE is sitting behind me right now on the sewing machine awaiting its personal 15 minutes of fame!

And it won't take two months...because as they're sewn together they become a bigger chunk!  so at worst it will be done in one month...and sometimes you just get galloping along and everything is fitting together right...but if it's one of those sew a seam and take it out and resew it days...well at least one will be done and I'll be inching nearer the goal of the completed quilt top.

I like to make a few tops and let them mature in peace in the cupboard...when I take them out I'll see them with fresh eyes and decide which should be quilted and finished.

One a day!  it works....
now I must get today's seam done then I can have a nice cuppa tea......
If you have been, thanks for reading!
And do write with your work strategies...I'd love to know!!!   Elizabeth

PS My brand new class for academyofquilting.com starts at the end of next week; it's called More Abstract Art for Quiltmakers....in my next post I'll write more about it.
Posted by Elizabeth Barton at 11:56 AM

Ha ha I so work like this. I work full time as a manager of a nursing home and often when I get in I just want to crash on the sofa, but once I walk into my sewing room I look around, take stock and try to make at least one decision. Sometimes I sew, or evaluate what I've done the evening before or prep for tomorrow but whatever it keeps me moving forward. Tonight I added some paint to some background fabric I'm working on and then stitched together some strips for an entirely different project and that was enough. I was tired. So tonight I also read your blog and realised I've done my one a day and feel good!!

and forward progress is made...and you're thinking about it too...

Your theory works well with gardening, too.

Thats the same way I work too. I tend to need a push just to get started, and sometimes I lose momentum somewhere around 20 minutes. So I do tend to require that I work at least one 15-20 minute period a day, and sometimes I am motivated to do more than one setting to move projects forward. And yes, some progress, even at fifteen minutes a day, does result in finished quilts.

I don't do those sketches ahead of time though. My process goes straight from idea to fabric, which isn't necessarily a good thing.

I've worked in 15 minute-½ hour chunks for years. Like Shasta, I don't sketch either.But I think it doesn't matter how you do it, as long as you DO it.

You're right - it is the Doing...and once you have invented your own process wheel, if ti works well for you, best to stick with it!!!

I can't claim to be anything like as methodical as you are Elizabeth but I suppose I work in a similar way. I always have at least one project on the go and will dip in and out of my workroom for short periods most days to move it on.

well I think when you write it down it sounds more methodical than it is!!

Mary Helen in OR said...

This is going to be my required
Read once a day".
Thanks for the kick in the pants sometimes lethargy is the greatest enemy.

I keep a log. Every night I record what I did that day. If I did nothing that day, I have to record NOTHING in the log. This often motivates me, even though very tired, to go into my studio and do something. Then I can record the small step I took that day.

Well I certainly needed to read this tonight. What you said made total sence to me. Thank you for giving me the push. I felt like I had hit a big bump and had totally run out of steam. I will be back at it in the morning after reading this. I had wanted to finish a big quilt that I had been working on quite a bit this week. Suddenly I just ran out of oomph. Maybe I just needed a day of doing nothing much. I usually try to at least do 15 min. of sewing in a day. Of course that usually turns into an hour. That is how I get things finished.

Oh gosh yes, recording NOTHING for all time would be VERY embarrassing!
sometimes life forces me into a day off, but usually if I"m really out of steam I think of something I desperately want to do...but tell myself I can only do it after I've done one thing in the sewing room!!!

My new post links to this. Making and sharing, regularly, both important. Thanks for the motivation. The only way to walk a mile is to take a step at a time, and keep going.
https://catbirdquilts.wordpress.com/2016/03/28/making-and-sharing/