The Importance of Being Titled

"What do you think about titles", asks Tricia from Canada, "how important are they?"
Looking back over the centuries I don't think titles were important to many artistst - it was the work itself that they expected to speak (or not!).  However, our modern age is much more verbal - not necessarily appropriately and often not very well informed and frequently singularly lacking in erudition - nevertheless words pour from us in torrents!!  I often laugh at the sports commenters: "he's in this to win!  He really wanted to get that goal! She's practiced for this for years..." etc etc!! Comments, yes, but pithy, no.

One legitimate purpose of a title is simply to identify the work; it is helpful to have names for things.  Many of us do have a "working title" as we create the piece.  It's hard to think about "the thingie on the wall"!  Working titles are usually quite literal as in "Green Houses on a Hill".
Later on as I finished the piece I liked the triple meaning of Green Houses and made that the name of the quilt.

As I'm putting the quilt together I often have a list of possible titles up on the design wall; as the design gradually comes together my thoughts about it solidify until one title seems more apposite than the others.  Sometimes, however, a piece goes out with the wrong name and has to come back for a renaming ceremony!!  I remember one quilt I did where the principal color was red and it was of abandoned industrial buildings, so I called it Red Abandon.  It was much later that I realised that the phrase brought to mind a very different picture: "she threw herself at him with red abandon!"

Like Tricia, I often feel that "untitled" is a bit of a cop out but I wonder if over time the number itself begins to have meaning for the artist.  Untitled #69 then develops connotations for him or her that it doesn't hold for the rest of us.  It's like the old Chinese restaurant joke where the regulars order their meals by number, and also tell teach other funny stories by number too: "a plate of #45 and, let me tell you Joke #73 - oho! that was a good one!"

While Untitled + a number is bland and meaningless to anyone other than the artist, an extremely cute title is also distasteful e.g."Mommy's Little Darlings" sickly sweet and cloying - Cleopatra did not cloy and neither should we! Of course if the quilt so titled was a picture of gin bottles such a title might be rather appropriate!

Even more annoying are totally irrelevant misleading titles.  A few years ago I had a show with an artist whose pieces all had these really long titles: "She done her Man Wrong When She Left Him for Hairy Harry"  or "Tell Me Your Secrets and Ask me your questions" etc  I looked and looked at her quilts which were all based on the same pattern (a "Broken Dishes" variation) and finally asked her where in the quilt were the secrets, or Hairy Harry?  Oh, she replied, the title has nothing to do with the quilt, it's just a line I like from a popular song!!  Talk about feeling cheated!  She made me, the viewer, try to make a connection between title and work and it was all a trick!

I do think that it's absolutely fine to have a somewhat ambiguous title which leaves room for the viewer to interpret the images differently.  For example you could make a piece based on the effects of light as I did in this quilt: 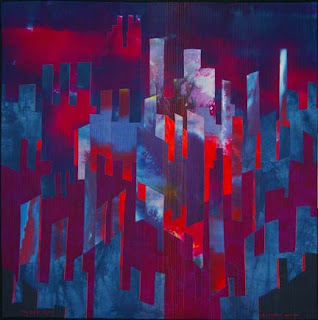 I entitled it "Last Glow" which mean something very specific for me, but is open (I hope!) to interpretation in different ways.
So - what do you think about choosing a title for a quilt?  Is Untitled #6 enough?  How explicit should a title be?
And, if you have been, thanks (as always!) for reading!   Elizabeth
PS I'm happy to say I've graduated from crutches to The Boot - though I'm so impressed with my new arm muscles I think I should do a little crutchercise each day!!

Posted by Elizabeth Barton at 9:35 AM

Glad you are improving. Great thoughts as always.

What do you think about using another language to express the title?
I sort of think that sometimes it works to help link the viewer with the story in the image. Equally sometimes it adds a bit more mystique and mood to nudge the viewer to the feelings you had about the work.

For instance, I recently used the Portuguese phrase for 'little girl of the slums and water' because I wanted the focus to be on the little Brazilian girl before they thought about the conditions she was living in. "Menina de Favela e Água" just seemed to work better.

I realise sometimes it would just be pretentious!
Sandy in the UK

well I guess you can be pretentious if you're titled!!
And certainly Menina de Favela flows more easily than "little girl of the slums" especially as we all know the particular kind of slums that favela are.

Excuse my grammar! I meant to write " but doesn't lead the viewer.

I feel cheated by "untitled"; I also feel cheated by obvious objective titles, something I could easily see by looking, something like "red circle on blue square." (I'd have felt cheated by green houses on a hill). And even as I say this, I think that the more abstracted my image, the less I want to draw attention back to the originating idea with a title.

I like titles that make me look again (multi meaning 'green houses' does that). And if I looked again and it wasn't there, I'd feel cheated in a different way.

One thing really refreshing in your discussion is that the idea/title doesn't have to be there from the start but can grow as the piece grows. On the one hand, having an idea can help with decision making; on the other hand it is good not to be tied to it.

I like a good title. Usually I have an idea, but the finished title grows with the piece and sums up what it's all about. I try to get more than one meaning in if I can and it sometimes has nothing to do with the first impression that someone might get of a piece. Titles mean a lot to me, and I love it when the synapses fire and I can say "yes, that's it".

I agree with Annabel--my titles grow with the pieces.

And I do not like Untitled or numerical tags, either.

Using foreign words in a title is a complex issue. I have done it once--Cabeza de Vaca on a longhorn skull--but when I see a title in a language I do not understand, it puts a barrier between the work and my ability to appreciate it.

Glad you are healing. Perhaps you could develop a crutchersize video....

Glad you have been able to set aside the crutches! I like titles because I like words and wordplay, (such as your 'Green Houses') and ambiguity and poetry. I think though, that textile work is like any art, including literature - once you release it into the wild, you have no control over what others make of it. Before that, it is wholly yours and you should call it something that makes you happy or deepens your thinking about, or connection with, the piece.

thank you all for your comments - I like the idea of a title that makes you look again - "aha, now did I see that too?"!