Can color carry the weight of the composition?

I’ve been reading about Kandinsky who is considered to be one of the founders of abstract painting. At the beginning of the 20th century with the advent of increasingly popular and sophisticated cameras, it was really no longer necessary for artists to make copies of real world events or places. Now they were free to explore other possibilities – of course many did not, and do not! There are large sections of the modern art world devoted entirely to making lush copies of the real world. Looking at a current exhibition going up in a local gallery yesterday, I saw that realism is alive and well in Athens, GA!!

While about two thirds of the quilts I’ve made have been “somewhat” representational – I never aim for realism, rather to communicate the beauty of the patterns I see in cities or buildings or in natural landscapes – about a third have been “abstracted” down so much from the original image that it’s hard to think of them as anything but abstract. 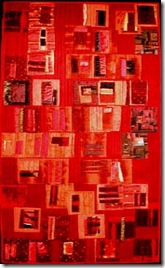 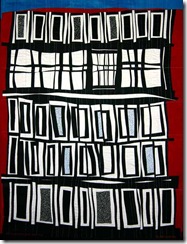 Kandinsky was not only a painter but a considerable art theorist – he’s written several books on his theories of art, what it should and should not, can and cannot do. He was very interested in the way that composers of music didn’t find the need to be as literal in their depictions of scenes or events as did (and do) many painters. From his observations that music obeyed certain principles of harmony, he developed his own theory of harmony for painting. He saw both colors and shapes in terms of their harmonic resonance. He wondered how  a specific set of colors could be brought to obey harmonic laws in the same way that notes did? He saw chords in great paintings like those of Rembrandt and when he listened to music he saw colors in chords. This ability (synaesthesia: tending to see colors in connections with sounds, or other cross over experiences between the senses, which we all tend to have a little of: think of a green smell versus a yellow smell!) was highly developed in Kandinsky.

You know how sometimes if you look at something you can’t immediately guess what it is – especially if it’s a detail? Well, Kandinsky noticed that when he first saw one of Monet’s haystack paintings he didn’t immediately know what it was, but he found himself emotionally responding very strongly to the piece. From this he concluded that if one used color and value well, it was possible that specific form was not so necessary, possibly not necessary at all. The power of the color in all its nuances of shade, value, hue and temperature might be sufficient. He felt that the strength of the palette alone could make the picture have a profound effect. Effect and affect, actually!! He later credited this particular experience with the start of his journey to dispense with references to particular objects in his painting.

Well I don’t know if I’m going to completely renounce objects! But it is a very interesting thing to ponder. Out of all the elements (shape, line, texture, value and color) it is color to which people seem to respond the most. And respond to first. You rarely hear someone say “oh I love that quilt because triangles are my favorite shape”!!! I know I have a strong reaction to high versus low contrasts in value – while a Rothko in the bedroom (one of the more cheerful ones, not the gloomy ones that he painted towards the end of his life) would be dreamy, I think a Klein in the breakfast room would get the day started with greater vigor!!!

Kandinsky originally trained as a lawyer - believing one couldn’t make a living in art. How many of us were steered by parents into making similar choices! Actually the nuns steered me away from art when it was discovered I couldn’t spontaneously draw perfectly rendered images depicting “A Day at the Zoo” etc!!! There was, of course, one person in the class who could do that and she was the scale against which we were all measured – and found wanting. Veronica, her name – I remember it to this day!!

Actually Kandinsky’s first experiences of art school (where he went when he was about 30) were not very positive: he complained of having to draw “smelly, apathetic, expressionless, characterless models” in life class! Outside of life class he painted landscapes in riotous colors – now I wouldn’t mind living with one of those! He wrote: “I was intoxicated with nature…again and again I tried to make the color carry first the chief weight and subsequently the entire weight”.

He took the musical analogy even further “Color is the keyboard; the eye is the hammer. The soul is the piano with its many strings. The artist is the hand that purposefully sets the soul vibrating by means of this or that key”. I think we can learn a lot by thinking of 2 dimensional visual art in musical terms: setting the overall structure, the mood and the harmonic color of the piece before we start out. And then to start the vibrations!!

Well I’m off to set a kettle vibrating…..next week I’m taking a mixed media workshop which I think will be more fun than theory but I shall continue to peruse Kandinsky! Hope to bring back some pictures and ideas from the workshop.

And, if you have been, thanks for reading – whatever color you did it in! Elizabeth

This is a great post. Thank you. I'm in the middle of moving, but am going to think about your words today, maybe even as I look at ho-hum boxes and imagine them in vibrant colors or think about purple grass and melon skies.

Thanks for setting the brain cells sparking, yet again. I wonder what Veronica does today?

Looking forward to the results of the mixed media class. I've been dabbling and have confirmed that it is fabric and stitch that is my first love

I saw it in Periwinkle with spots of orange...
love this post...
thanks for writing it

For me, colour is almost everything. It is where I start a piece usually. Then I figure out what I want to do with it.

Thanks for the interesting post. One more thing to contemplate on my struggles to be less literal (in many aspects of my life).

Wonderful read...colour has called my name ever since I can remember.

This post was just so inspiring and even though I too am in the middle of packing up to move house, I have been trying to think of ways I can put these ideas into a quilt. Colour is really at the heart of everything isn't it!

Thanks for the info on Molly Bang's book. I got it from the library and wow! What a great presentation of the material. Stuff that makes sense, but that I've never really *thought* about.

Thank you for another inspiring post. Kandinsky's thought that "concluded if one used color and value well, it was possible that specific form was not so necessary", is something I have been asking myself for some time. Interesting topic.