The Importance of Art in creating behavioural change

So, what is Art  about? Why do we do it?  Some would say they make art to please themselves, some make it to please others,  some to find expression for their observations and emotions and visual cognitions.  Others for the fellowship (there’s nothing like trying to speak at a guild meeting to know just how much fellowship exists!).  Personally, I love being able to learn new things and to feel like I have some expertise in making something. 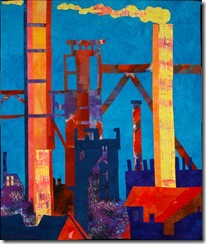 There are many reasons for making art and one of the most powerful and, probably, the most ubiquitous  is Education.  Of course, sadly, art has often been misused in propaganda – is misused every day in advertisements cleverly produced to convince us of something.  Somebody just said last night “why doesn’t the food look like that when we go to that restaurant?” But art can – must - be used for good.   Therefore, I was very interested to read that the National Science foundation had actually awarded a large grant to an artist to make work to convince the public about the importance of the environment.  Mary Miss and the Institute for Learning Innovation were given the money to explore “how art installations can shape the public discourses surrounding the science and engineering decisions that shape the city”.  Mary Miss has made art about the environment for the past 40 years.

Sadly, the public at large, the man in the street,  is not very interested in environmental issues .  Despite the fact that all my neighbours complain about the heat and the lack of rainfall and ask me when I’m going to learn to do rain dances – I can’t convince any of them to use free heat from nature to dry their clothes, to stop watering grass and sweet gum trees, to turn off their a/c at night when the temperatures drop, to not leave the telly on all day, to recycle everything that can be recycled, to save up errands and just make one trip instead of 4,  etc etc.  They are not ready to make the changes necessary to reduce their reliance on gas and electricity.    Furthermore, businesses are largely against making any of the changes necessary to decrease the pollution that is likely to be the cause of climate change because of the cost.   (although some of the changes would actually save them money! for example, if they stop over-packaging: a small bottle of pills is packed in a box 4 times the size, therefore 4 trucks instead of one are necessary to deliver those pills to the store.) 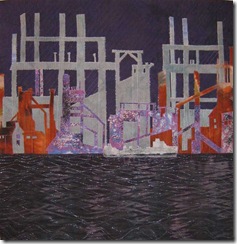 Climate researchers are faced with  considerable political skepticism only parallel to that shown by the flat earthers of medieval times.   Thomas Kuhn’s classical text The Structure of Scientific Revolutions  (1962)  discusses the history of scientific discovery focussing on what kinds of ideas were even thinkable at any given time? Kuhn researched the historical ways in which people could be  convinced of the new  scientific discoveries of those days.  His main thesis was that new understanding in science is not, as one might expect, the result of the straightforward accumulation of facts, but rather from a set of changing intellectual circumstances and possibilities.

Mary Miss’ first art installation (Broadway 1000 steps) was actually designed as a scientific experiment: the hypothesis was “can art change people’s mind?” This was tested by making many observations of the site and the public as they passed by.  That data is now being evaluated.  Meanwhile Miss has installed a 3 year project at the Indianapolis Museum of Art: FLOW: Can You See the River?

Art rules!  Art educates! Furthermore, we are now probably at a time in the history of the world when visual learning and stimulation is at its peak – we are constantly bombarded with visual images to convince us of this and that all day long – let us make  Art Speak Out Loud!  think about it….

And, if you have been, thanks for reading.  Has anyone got instructions for the rain dance, by the way?

PS: the quilts shown are all mine and are titled, from top to bottom: Steelyard Frieze, Oh what lovely smoke!, Heavy Metal, and All That Glitters is Not Gold.

Posted by Elizabeth Barton at 8:35 AM

came across this quotation from Beethoven:
"Don't only practice your Art,
But force your way into its secrets,
For it and knowledge can raise men to the Divine."

Great post, Elizabeth, and wonderful observations. You are so right about it all. I look forward to seeing what Mary Miss' results tell us. Please do share when you find out.

Thanks. Lisa (who wishes that her neighborhood ALLOWED clothes lines.)

The arts demonstrate our power to innovate by providing visceral examples of how imagination is transformed into creation. It's the arts that teach us how to think beyond boundaries and inventively overcome obstacles.