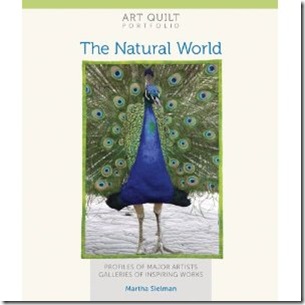 Announced by a rather splendid peacock on the front cover, Art Quilt Portfolio: The Natural World is a 192 page feast of color and nature. Curated by Martha Sielman, but not wearing her SAQA hat! There are nineteen featured artists with several pages of quilts and text for each one. Each section is followed by a 10-20 “gallery” quilts. The sections are: flowers, birds, water, animals, leaves, insects, trees and natural textures. The featured artists are: Judith Trager, Paula Chung, Ginny Smith, Ginny Eckley, Sally Dillon, Karen Miller, Cassandra Williams, Betty Busby, Annie Helmericks-Louder, Dominie Nash, Katherine Allen, Annemieke Mein, Melani Brewer, Ruth McDowell, Elaine Quehl, Dottie Moore, Nancy Cook, Barbara McKie and Patricia Gould. A fine galaxy of talent! The range of quilt artists is great and there were several wonderful people of whom I was unaware. It would have been good to include website and blog urls, by the way, so further reading would be easy.

Artists were selected following a call for entries to all quiltmakers and considerable research through online and in print images. Sielman stated that she “looked for artists who had a mature body of work that fit the theme”. The “gallery” artists were chosen both to complement the main theme and to add to the variety. All but two of the featured artists in this volume are American; however, in the next series, People and Portraits, there is a more international mix, with 8 countries represented among the 21 featured artists.

There is an excellent introduction by Martha Sielman – which I suggest you read before diving straight in to the pictures…it’s good to know that background of the writing of the book and some of the artists’ comments and processes. Each artist has written fairly extensively about their inspirations, education and working practice and it’s very telling to read their own words and hear their own special voices. Also quite intriguing to learn something of their lives: I’m envious of Judith Trager’s 96 (!) cousins when I don’t have even one. Maybe she could spare a couple!

Many of the artists give excellent pieces of advice and while their comments are summarized under clear paragraph headings, I would have like a little more continuity between the artists, since the paragraph titles were somewhat various and arbitrary. Perhaps Martha could ask the artists in future volumes to organize their comments into the same sequence and the same topics? Obviously each artist could write more, or less, under each paragraph but it would give consistency. Then you could compare inspiration, working methods, background, general advice, education and so on.

The design of the book is nice and clean – virtually no unnecessary “designer touches” which invariably can reduce a worthwhile book to a cheap magazine. However, the best use wasn’t made of every page…trying to fit two or three small images to a page often left unused white space sometimes quite awkwardly placed. Better to go with one big image per page unless there was some compelling reason to do otherwise. Several times I thought – if only the text had been at the bottom instead of side by side with the image, the image could have been bigger. The pages with one big glorious image are wonderful. I do also applaud the neat, unobtrusive and very complete amount of information that is tucked in beneath each image but I don’t like the unnecessary lines (on just a few images which is odd) with dots indicating to which picture the text belongs (p53 is an example) – but it’s a minor point.

If I had a complaint to make it would be that though the color and the imaginative representations in most of the quilts are excellent, the compositions are often quite dowdy! Making a wonderful picture of a bird, flower or animal and then surrounding it with awkward lumps of fabric to fill out the space makes ordinary what could have been extraordinary. Obviously this isn’t true of all by any means, but, as you look through, lack of training in design, whether formal or informal, really shows.

An interesting gallery section is 13 ways of looking at a blackbird – the title taken from the series of short poems by Wallace Stevens. The pieces in this section are from a group of artists who got together to make work reflecting the poems. It probably wasn’t possible for the whole poem to be printed in the book – so I’ve included it below since, according to Wikipedia, the poem is in the public domain. It was published in Stevens’ first book of poetry, Harmonium, and consists of thirteen short separate poems in which blackbirds were mentioned. There’s a lot more information about Stevens here: http://en.wikipedia.org/wiki/Thirteen_Ways_of_Looking_at_a_Blackbird

For the most part the images of the featured artists are superb but I would have loved some details!! Especially of amazing piecing like that of Ruth McDowell, or the hand stitching in Dominie Nash’s work – and others. And some of the “full” pictures are really quite small. Some of the “gallery” images are worthwhile including, alas others not so – presumably added to show the breadth of the field? But is it is good to include weaker work just to show the range? Better work could have had more space – bigger pictures.

I was also sorry to see that Elizabeth Brimelow, who has made some of the most amazing works about the natural landscape I've ever seen, was reduced to one small image in a gallery section. Likewise some other people who have made stunning quilts, e.g. Leslie Gabrielese, Dianne Firth and Nancy Erickson.  However I was told this was because all of these artists have been  featured in the two Masters books which makes sense.

And I do feel there were too many digital photos on fabric...the day when these were wonderful has passed! Plus, there was a little too much emphasis on realism without obvious intent at communicating personal emotion, especially in the gallery sections.

Edit edit edit!! is the key to good crisp meaningful writing (which of course I should say to myself!)…I saw lots of examples of trite statements that could well have been omitted. And the thing about a book of images is that you want really want the pictures to be the stars while also having all the key information very succinctly given in a well organized manner.

Overall however, it’s a lovely book with a wide range of work and much of it not seen before, a great addition to one’s art quilt library – I look forward to further editions in this series. The next one is People and Portraits, which will be published next spring.  If sales go well, then the 3rd volume will be Abstracts and Geometrics after which (with luck!) will be Landscapes/Cityscapes and a 5th volume on Commentary (political, social, economic).

I’m very happy that books of quilts are now more like books of paintings – lots of images, some commentary and no need for pathetic little projects to keep the little woman happy and out of mischief!

Take a look! See what you think – me? I’m off for mischief!

Thirteen Ways of Looking at a Blackbird

I
Among twenty snowy mountains,
The only moving thing
Was the eye of the blackbird.

II
I was of three minds,
Like a tree
In which there are three blackbirds.

III
The blackbird whirled in the autumn winds.
It was a small part of the pantomime.

VI
Icicles filled the long window
With barbaric glass.
The shadow of the blackbird
Crossed it, to and fro.
The mood
Traced in the shadow
An indecipherable cause.

VII
O thin men of Haddam,
Why do you imagine golden birds?
Do you not see how the blackbird
Walks around the feet
Of the women about you?

VIII
I know noble accents
And lucid, inescapable rhythms;
But I know, too,
That the blackbird is involved
In what I know.

IX
When the blackbird flew out of sight,
It marked the edge
Of one of many circles.

X
At the sight of blackbirds
Flying in a green light,
Even the bawds of euphony
Would cry out sharply.

XI
He rode over Connecticut
In a glass coach.
Once, a fear pierced him,
In that he mistook
The shadow of his equipage
For blackbirds.

XII
The river is moving.
The blackbird must be flying.

XIII
It was evening all afternoon.
It was snowing
And it was going to snow.
The blackbird sat
In the cedar-limbs.

Posted by Elizabeth Barton at 6:51 AM

Oh! The poem is wonderful! I'll get a book of more this afternoon at the library, thank you for printing it. Thank you to for introducing me to what sounds like a spectacular book and for critiquing it as well. I sometimes feel that I must be out of sorts to not appreciate gladly whatever is served up. I've added it to my list. Thanks again.

I would just like to clarify that the poem by Wallace Stevens is in just one poem divided into stanzas. It is meant to be read, perceived and enjoyed all together as one piece!

Thanks for your constructive criticism- there's always room for improvement!
-Betty

Good critique of the book. I do like detail shots of the works as well, since so many of these fiber artists are such skilled craftsmen. Yes, I 100% agree on the photo on fabric quilts. Done to death now. Thanks for posting this.

Elizabeth, I love your blog. However, anyone who gets to your thank you has been reading. No need for the conditional when you say "Thank you for reading."
Thanks for reading, Mary

thank you, Mary. I sure hope they have been reading, but you never know! and forgive me my bizarre sense of humour!
the phrase is also a reference to an old radio show that used to use a similar line...

Elizabeth, it's a pleasure to read your blog, which is always educational or thought provoking with some wry humor. I especially appreciate your keen eye, thoughtfulness and the fact that you don't sugarcoat. Now I am really interested in this book.

and please refrain from removing your refrain, it gives a nice cadence to your blog