A Quilt on the Cover

I don’t know if many quilters noticed that the August edition of Art in America has a quilt on the cover:  Tracey Emin in bed with her curator (note, he’s fully dressed!) under one of her iconic quilts.  Inside, critic Ossian Ward writes, in a review of her current retrospective, “Emin: Britain’s famous “bad girl” (she was one of Saatchi’s YBA discoveries a few years ago along with Damien half a shark Hirst) artist reveals a depth and vulnerability seldom evident in smaller samplings of her works”.

About 3 years ago I saw a Tracey Emin show in Edinburgh at the museum of contemporary art and what struck me most about the work was its authenticity and also how well crafted the quilts were.   Emin now has help to sew the quilts though she did make them herself originally: “I have a team of about six stitchers and they work for me. However, I don’t get anyone to do any sewing that I couldn’t manage myself. I do know how to do all the stitches they do – so I could make all the pieces myself, but if I did I would be a much slower artist”.  Her quilts are basically wool blankets with layers of cotton, wool and felt appliqued on top with a blanket stitch.

There were a number of quilts in the show in Scotland but the vigilance of the guards only permitted me to get three photos!  You can find plenty of Google images though and some of them will probably make you goggle as well as google!   But the strong language for which she is well known, especially when drunk, shouldn’t deter you from the obvious validity of the messages.  Yes ,she is lamenting her own life which has not been easy, but she is fighting back, hard.  Too often abused children  become permanent victims, Emin is determined not to be one even if this has led to what the critics so delicately and prissily (and, perhaps, fearfully?!) call vagina dentata. 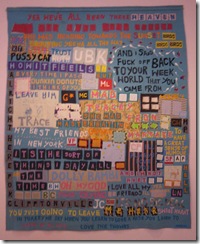 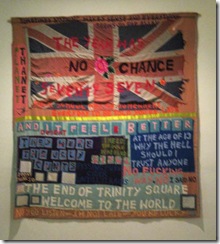 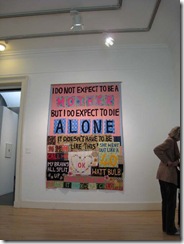 A Tracy Emin quilt was part of the finale of the big V&A quilt show in London last year and there was at that time even a newspaper article on “how to make your own Tracey Emin quilt”!   Presumably the editor of that particular established bastion of the 4th estate felt that a cutesy appliqued cat was what quilters reading about Emin’s work would want to have!  Though it might have been much more interesting if the instructions had read “get drunk, think about some of the awful things that have happened to you in life, write them down and then cut out the letters from innocent little floral fabrics”!!!  Now that might have lead to some great follow up work!  It would be kind of fun to come up with a quilt instruction book like that now I come to think of it! (potential publishers please note my email ad is at the top right of this blog!)

Germaine Greer, who collects authentic traditional textiles from around the world,  wrote: “My treasured textiles are not art. Tracey Emin's quilts are. They exist to be exhibited, not used. At first, Emin's sewn work annoyed me, because I thought it a coarse travesty of women's craft practice, which is another case of my missing the point. Women's craft practice is one of the subjects of Emin's work, which is conscientiously imperfect.”

So what can be learned from an art quilt making the cover of AinA and from Germaine Greer’s remarks?
And from  Emin’s work  as a whole and from her many shows, including a current major retrospective in London ?
Firstly, I think that we should stop whining about quilts not being accepted as art!
Secondly, that we should put our honest naked selves, the good the bad and the ugly, into our work. The stitches should reflect our humanity.
Thirdly, the images should be powerfully strong, eye catching, thought provoking, well designed and composed.
If the work is strong enough, valid enough and different enough, it will be shown!

Well, I’d better start thinking up some instructions, so on with the kettle and the thinking cap!
If you have been, thanks for reading….love to get your comments!   Elizabeth

Posted by Elizabeth Barton at 11:36 AM

Lucky enough to get to the Hayward for the Tracey Emin retrospective yesterday - a stunning, painful, thoughtprovoking exhibition which didn't always make for easy viewing but did succeed in making you look at things in a different way, often questioning your own assumptions!

And why oh why does everything I do start out serious and end up pretty! It can be so difficult sometimes to shed the craft assumptions and make art!

Feelings are not always pretty. If I want art to express my feelings, my art will sometimes express deep grief and harsh anger. Use the calicoes if you wish, but say something!

Thought id stop by and say hello. Richard from the Amish community of Lebanon,pa.

I am not sure that these Tracey Emin pieces qualify as quilts. To me, they seem to be more posters-made-of-fabric than quilts (defined as: three layers [backing, batting, front] held together with stitches.) I am not saying that it's not art, but does it qualify as "quilt"? And if we do define these objects as quilts, do we take something away from works that do include the traditional definition of quilt? I think so.

Did it bother you, Elizabeth, to have your work defined as "fabric collage" rather than "quilt"? How important are names?

So Jealous of Sandra being able to see the retrospective....
And I can certainly sympathize with not wanting to end up merely pretty - whether in oneself or one's work! It's good though to have any piece as immediately visually attractive, and then as you get closer, there may be a different message (not referring to self with this! I hope!)
Re Sally's comment. There are so many things called "quilts" now that are really not if one holds to a very strict definition that I think the "name" is not that relevant. Emin works on blankets, bed coverings, with hand stitching, layering fabrics which I think is close enough. If she enters some into a show where I'm a juror, I'll probably accept them!!!
And I will use the time fiber collage myself if describing what I do to people to whom that term is more explanatory than the term art quilt. The semantics, I think, relate more to the language spoken rather than to the objects. It's also good to carry a few postcards to bestow upon the unwary!

Thanks Elizabeth. I wasn't aware of this retrospective - and I had no idea that Emin was so prolific as a quilt maker.

I've always like her work - never really thought of her as a quilt maker.

If you need any "pattern" testers for your book, I'm raising my hand! ;-)