To be strictly correct (or even loosely correct for that matter), “abstract” as a term comes from “abstracting” – i.e. taking something out of something (usually some kind of scene) and making a piece about it. The correct term for something that has been created from no obvious concrete inspiration is non-representational. 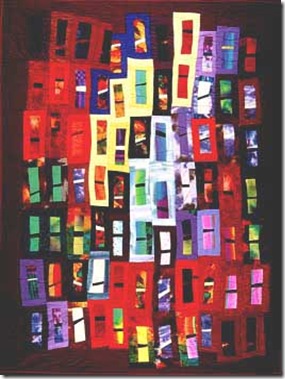 A quilt, therefore, which strove to totally recreate a specific scene or photograph would be representational, one which took some elements from a scene and modified them would be abstract and one which had no reference whatsoever to anything in real life would be non-representational.

The most appropriate category for a given piece would probably be best decided by the intention of the artist. I once had the temerity to compliment Nancy Crow on the quilt she had made about “the lake in the woods”, and the poor woman nearly had a fit! Her aim is to make work that is totally non-referential and here was this backwoods blithering idiot seeing ponds in it!

Maybe there is a point to the artist’s statement after all? (although I doubt it!) .   I do think that titles are both important and meaningful. If you intend that your  work  be totally non-rep then the title should reflect that. Most of Ms Crow’s titles do (being simply numbers), though I was very puzzled by some of her recent titles that appeared to refer to some inner angst. Are those titles referring to the quilts? To her mood as she made the quilt? Or to her impatience later on with people requiring titles? That aside: it seems to me that if you intend your piece to be totally non-representational i.e. being about the basic building blocks of 2D art and your arrangement of their relationships to one another, then the title should totally indicate that. The titles should relate to what drove you to make the piece. I like to stitch the title right onto the front of the quilt: it is a clue to what the piece is about. But I’m not going to spell it out any more than that. Unless you are greeting me with a large check and rosette of course! Then I’ll probably say anything! 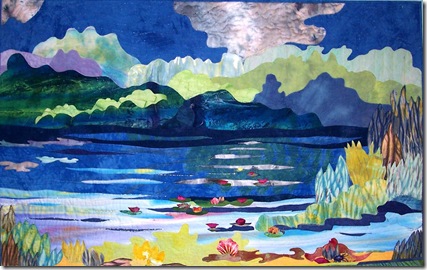 The real reason, however, for an art quilt to be chosen for an exhibition of excellent work should be simply that: its excellence regardless of the category into which it might fall.

Having categories is a big problem especially with shows that divide entries up into categories (sometimes arbitrarily from what I hear). Obviously then if you are competitive and want to get in you simply make a quilt for the category that has the lowest number of entries. The marketplace, right? Supply and demand. And I’ve actually heard that from jurors: “oh we had so many good pieces about poodles this year that even though your dear little poodle was so much better than all the miserable dachshunds we had three dachshund prizes to give out..so sorry…” 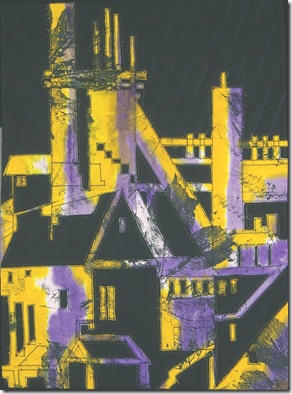 I do think the category problem is compounded by having 3 dachshund (or poodle) owners as jurors but that is a whole other issue.

And let us not kid ourselves about impartiality, there’s plenty of psychological research (to say nothing of the US Supreme Court) that shows that idea to be a myth!

If you have been, thanks for reading! From a devoted mongrel lover, Elizabeth

Posted by Elizabeth Barton at 7:08 AM

This really hit home for me - Hubby is always asking - "what is that suppose to be?" arggg - he has learned to say, what were you thinking when you made that? I still wonder why people always want art to be "something" - why not just - ohhh that is beautiful or whatever adj necessary.
Mechelle

This is the best explanation I have seen so far. Thank you.

I'm so glad to see your Mongrel # 47 -- I myself have a large number of them in my collection; they seem to multiply by themselves, without any nourishment or even any light --snort--

Thanks, E. for adding to the conversation.

I would think that if the viewer sees a pond or a poodle in the work, then tha'ts OK, because that is their honest response. It's just like giving a gift. Once it's given, you have no control over what the receiver does with it. And what they choose to do with it may be very important to them.

LOL! I love the new titles. As usual, your explanations are spot on.

First coffee in my keyboard and now ginger ale shooting from the nose! You are making me howl with hilarity.

PS I am now working on "Constance Eyed the Yardman Evilly"

I happened to check out the list of winners from the Houston IQA show yesterday and was amazed at how many different categories they had. Also how similar all the quilts looked, no matter what category they were in.

I agree with Kathy. Looked at the winners on the website and could not believe how similar they were, whatever the category. Haven't been down to Houston yet (we'll go Sunday), but don't see intense originality in the winners.

Beautifully put! It has fired up the urge to go and make another mongrel!

I agree with you that an artist's statement has little purpose - it bugs me where there are words next to a piece "explaining" it. I came to see an artist, not an author. The visual should be the medium of expression.